The Edinburgh International Film Festival is over for another year and while I didn’t get to go to quite as many films as I would have liked – I am but a poor person after all – I did get along to a handful. One of those I have already talked about (the rather poor Kids In Love) but rather than do individual reviews of the rest I have decided to go for the quick-fire approach. So here’s my thoughts on five films I had the pleasure of watching.

END_OF_DOCUMENT_TOKEN_TO_BE_REPLACED 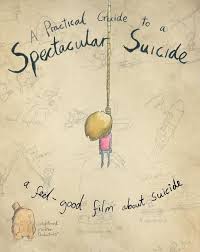 A Practical Guide to a Spectacular Suicide is yet another film that managed to gain its funding through the use of the crowd, raising it’s £3000 through the use of Sponsume.  Directed by Graham Hughes and co written by him, Keith Grantham and Graeme McGeagh.  All 3 of whom only have one previous film to their name, 2010s The Big Slick which was made for only £200 and won a BAFTA New Talent Award for writing.  APGSS is a dark comedy and has been shown at the Edinburgh Film Festival, it’s another one that is unlikely to make its way to a wider cinema release, but should at some point be available in one form or another.

END_OF_DOCUMENT_TOKEN_TO_BE_REPLACED

Coherence is currently playing at the Edinburgh Film Festival and is a small independent sci-fi thriller.  It was directed, in his first feature film, by James Ward Byrkit, who is best known for his role as a writer on Rango.  Shot inside his own home, he decided against the use of a traditional script, instead just mapping out the major plot points.  This allowed the actors to improvise and brings a realist feel to the dialogue.