I’ve spent a lot of time scoffing at people’s declarations that 2016 has been a bad year for cinema. While there is no denying that Batman vs. Superman, Suicide Squad, X-Men and a few other blockbusters were utter balls, there have been more fantastic movies outside of that world than there has bad in it. In fact, this is one of the toughest top tens I’ve ever come up with and if ten were a bigger number films like The Witch, Rogue One, Spotlight, Your Name, Creed,  Bone Tomahawk, Adult Life Skills and more would have found their way into it. Sadly it’s not, and these are my chosen ten. As usual, this is my ten favourites which are different from the ten best and is based on UK release dates. It is also opinion so while you can feel free to tell me I’m wrong, don’t expect me to care.

END_OF_DOCUMENT_TOKEN_TO_BE_REPLACED 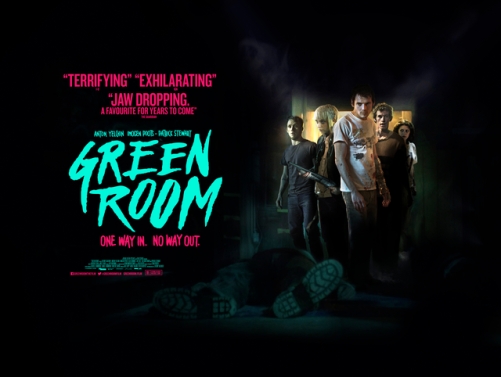 There’s something thrilling about punk rock on film. The wild and pissed off nature of it lends itself to any number of scenarios. However, very few films have captured that nature in the way Green Room does. When punk band The Ain’t Rights walk into a room full of Neo-Nazis and launch into a cover of The Dead Kennedys‘ ‘Nazi Punks Fuck Off’ it taps into the rebellion that lies at the heart of that scene. That that moment is encamped in a film that takes the siege horror genre and twists it in a whole manner of fucked up ways is just an added bonus.