If you’ve ever sat in a smoky room, squinting at a TV screen through the fog of whatever is being inhaled around you and struggled to make out exactly what is going on, then you are probably prepared for the experience of watching Inherent Vice.  The latest film from Paul Thomas Anderson, sees the Hollywood auteur try to adapt the famously incomprehensible novel of Thomas Pynchon.

Normally around here, I would try to explain the plot.  However, I am tempted to say that there really isn’t a point.  The simplest way to put it, is that Doc (Joaquin Phoenix), is hired by his ex girlfriend to stop a plan to have her current lover committed to a mental asylum.  Upon getting involved, Doc discovers that several cases are merging into one and all of them seem to point towards a mysterious organisation, known as ‘The Golden Fang’.

At least I think that’s what happens, to be honest I’m not very sure.  This movie doesn’t just look like it was shot through a smokey fuzz, which it does due to it stylistically looking like it was done on film rather that in digital, but feels like it was concocted by the guy who caused that smoke.  Around half way through, it is a pretty safe bet that you will sit back and realise that you don’t have a clue what is going on.  However, that probably won’t matter.  Because if you have allowed yourself to be carried along for the ride, then you will be enjoying yourself all the same.

Because even if a lot of it makes no sense, at least on first viewing, you can’t help but appreciate it.  The dialogue all feels like poetry, even as you fail to comprehend it and the whole thing is shot beautifully.  Anderson just gets what he is filming, it both looks and feels like this movie has been shot in 1970 and everything from the costumes to the groovy way the characters speak, just feels right.

To some, this will already be beginning to sound like a bit of a slog.  One of the few things most people expect from every film, is a coherent plot that they can follow, take that out and they are made uncomfortable.  However, if you are willing to sit back and forget that, there is a lot to enjoy.  It is a Gonzo trawl through this period and at times is also very funny.  Phoenix has a brilliant grasp of physical comedy and his facial expressions and ability to tumble to the ground, provide some genuine laugh out loud moments. 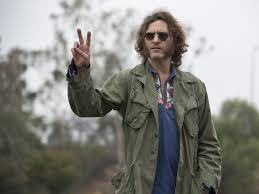 Phoenix also has great chemistry with Josh Brolin, whose Detective Bjornsen (known as Bigfoot) has a wonderful love hate relationship with Doc.  Whether he is arresting him or asking for his help, when the two are on-screen it nearly always leads to magic.   A lot of credit has to go to Brolin as well, who stomps his way through the film performing fellatio on bananas and kicking things over as they get in his way.  There is also one particularly brilliant scene, in which he aggressively orders pancakes in Japanese while engaging in a conversation with Doc.  Why is he ordering pancakes?  Well, apart from him being hungry, I genuinely don’t have a clue, but it adds yet another farcical and surreal element to things and turns it into a very funny scene.

Inherent Vice is a genuinely difficult film to talk about.  It floats along in its own little world and you can never be entirely sure as to what it is getting at.  However, if you are willing to get in its groove and flow along with it then it will enchant you.  It’s unlikely to stand up as one of Anderson’s greatest pieces of work, it lacks the structure for that.  However, for those willing to ignore everything they are used to expecting from a film, there is a hell of a lot to get from this and it demands repeated viewings in order to grasp all of that.

One thought on “Inherent Vice”