A cartoon based around the adventures of a sponge which lives in a pineapple under the sea sounds like something dreamt up by someone after a long day of taking halluceinogenics.  However, it does somehow exist and SpongeBob Squarepants has become one of Nickleodeon’s biggest exports.  The first SpongeBob movie was released in 2004 and despite a lengthy period between them, everyone’s favourite yellow fry cooks is now back with The SpongBob Movie: Sponge Out of Water.

Usually around now I would do a quick summary of the plot, try to let everyone know where we stand.  However, trying to summarise this film would probably take about a thousand words and even after all that there is a pretty decent chance you wouldn’t have a clue what was going on.  I will therefore boil it down to make it as simple as I possibly can.  Someone has stolen the secret formula for Bikini Bottom’s famous Crabby Patty and SpongeBob and the gang want to get it back.  There, that wasn’t too hard. 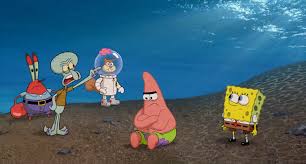 However, this trip to get it back takes in time travel, mystical dolphins, planets crashing into each other, Bikini Bottom undergoing a Mad Max style apocalypse and finally SpongeBob and the gang ending up on solid ground, where the movie turns into a hybrid CGI, live action mash-up, as they do battle with Antonio Banderas’s pirate Burger-Beard.  It’s a surreal madcap dash through this ridiculous world and the truth is you will very quickly either throw your hands in the air and storm out or sit back relax and just allow it all to wash over you.

If you are willing to let it go over you, what you get is a genuinely funny movie.  With nods to the likes of Douglas Adams, this strange world is genuinely good fun to be in and the film slants its humour perfectly into that sweet spot where it should appeal to both children and adults alike.  Whether it is simple slapstick or dolphins shooting laser beams out of their head, when this movies humour connects, it connects hard.

It isn’t perfect however and when they leave Bikini Bottom behind and come onto the land it does lose its way a little bit.  The altering of a story book allows SpongeBob and friends to gain super powers and the Avengers aping final showdown feels out-of-place with the rest of the film.  It’s a bit of standard children’s TV ‘lets all come together and take on the big bad’ and it is all just a bit Power Rangers for a film which on the whole stays so far away from cliché and trope that it might as well be on a different planet.  Yet, even this doesn’t bomb badly enough to take away from the rest of the film.

I should be honest and admit I’ve long been a fan of this little sponge and the insane world that has been created around of him, so I did come in with a grounding of knowledge in just what was going on.  However, I honestly don’t think that is needed.  If you are willing to let Sponge out of Water take you along for the ride, it won’t matter whether you have seen every single episode of SpongeBob or have never heard his name, you will get caught up in this bonkers world anyway and probably have a ruddy good time because of it.

One thought on “SpongeBob Squarepants: Sponge Out of Water”