TNA is a mess at the moment.  Over the last couple of weeks we have seen some of their biggest stars decide to leave the company and they seem to bounce from disaster to disaster.  Sunday night’s Slammiversary, seemed to sum up all of those problems at once.

Firstly, there were very few matches which actually meant anything.  Having already already taped the next batch of Impact shows, anything that meant something would have been spoiled.  However, that’s an issue that could be forgiven if they had put on an entertaining show, sadly they didn’t.

If you want to find something that sums up TNA’s problems, then you need only look at the X Division.  Once the jewel in their crown, it is now a shadow of its former self.  Don’t get me wrong, the opening match provided all the fun you might expect from the division, but it had none of the story.  Who is Tigre Uno?  Why is he the champ?  Am I supposed to care about him?  Every year TNA makes noises about elevating the X Division, this year they spruced up the title, and each time they seem to fail miserably. 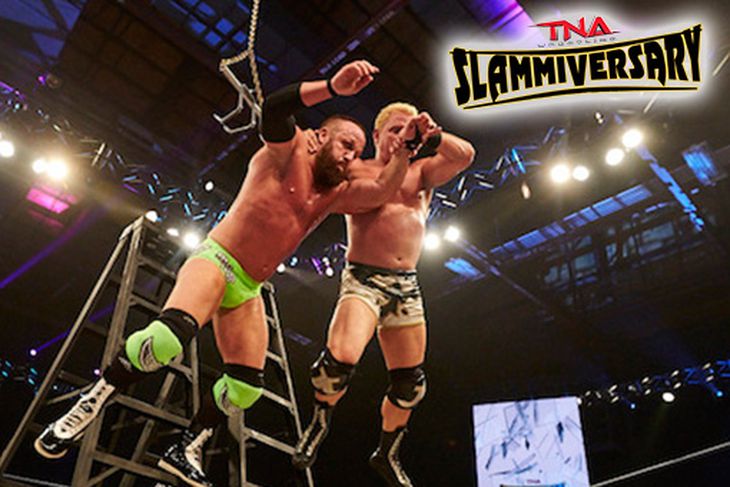 Then there is TNA’s other big selling point or at least where they can claim to be different from WWE, the Knockouts.  Now don’t get me wrong, the Knockouts are in much better shape than the Divas.  They have a coherent storyline going on at the moment, which while not great, at least makes sense.  However, they still just do and say things that undermine it.  Two seconds after Josh Matthews had stated that in TNA you don’t see things like ‘bra and panties matches’, you had Pope quipping that he’d like to see the Knockouts in one.  It’s a throw away line, but it’s just so stupid.  It instantly reduces these women, who were putting on a decent match, back to sex objects.  Something that isn’t helped by the fact they’ve built an entire character, Brooke, around the fact she has a nice arse.  Do you really want one of your top babyfaces to be that  character?  Do you want anyone to be that character?  She’s come on leaps and bounds in the ring, but all I know about her is that she likes shaking her arse.

Now don’t get me wrong.  There were also some good matches at Slammiversary.  Davey Richards and Austin Aries showed just how good they are, despite a dodgy finish.  While Magnus and James Storm managed to rise above the clunky build up to their feud, James Storm pushed his wife in front of a train for christ sake, to have a very entertaining brawl.  The only problem is that going forward three of those wrestlers are at the moment appearing to leave the company.  Now they might be coming back in some sort of GFW invasion angle, there certainly seems to be some sort of working relationship brewing between the companies, but until that is confirmed things do not look good for TNA.

Which brings us nicely to the main event, the King of the Mountain match for the newly created King of the Mountain title.  A rebranding the old Legends/Global/TV title.  Does anyone care about that belt?  It certainly meant nothing in the past.  We often complain about how WWE treats their mid card titles, but compared to this belt the IC title has been booked to perfection.  So that just makes you ask why we should care that Jarrett has won it while not a member of the TNA roster?  I certainly don’t.  It’s hardly Punk walking out with the WWE title is it?  It’s such a blatant attempt to create a story out of nothing and I don’t think fans are going to buy it.

Then there is the match itself, the King of the Mountain match is one of the biggest clusterfucks of an idea ever. That’s no dig to the men involved, they did the best they could and put on an alright match, but they were fighting a losing battle.  The idea of hanging the belt above the ring to win is just bad and it seems to make it incredibly hard for the guys to structure a match around it.  You have to suspend your disbelief when guys are scrabbling at the title in ladder matches, unable to pull it down for whatever reason.  That becomes even harder to do when what the guy is trying to do is hang up a belt, I hope they don’t have the same problem hanging up their coat at the end of the day.

This is probably me being very harsh on TNA, but the truth is the company has so little going for it at the moment that it is hard not to be.  WWE has its problems, but they pale in comparison to this shit show.  What makes it even more annoying is that they have some genuinely talented wrestlers, much like they always have.  They just seem incapable of learning from their own mistakes and moving away from the overbooked rubbish they have been peddling for years.  With the exodus of talent and rumours of the TV deal falling through, the next few months are crucial for TNA and I can’t see why anyone watching this PPV would rate them as a company worth saving.