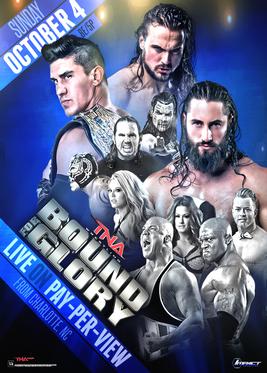 A week and a half removed from Bound for Glory and TNA seem to have used the show to hit the reset button.  It doesn’t hide the fact however that the show, showed up everything that was wrong with TNA.  From the opening Ultimate X match, which featured someone making their debut, to the closing of the World Title main event, it appeared like TNA had booked this on the fly and in many ways that seemed fitting for a company that seems to have been doing that for a long time.

When I first started watching TNA it was the X Division that drew me in.  Samoa Joe, Christopher Daniels and AJ Styles to be exact.  It was a division filled with outstanding performers who seemingly worked at a pace no one else could rival.  However, it was also full of intrigue.  Characters that made sense and had genuine issues with each other.  It was some of the best mainstream wrestling in the world at that time and it was so exciting to watch.

In the opening match of Bound for Glory, four guys got into the ring and did a bunch of spots.  It was entertaining enough, but it didn’t mean anything.  It was just guys doing flips.  Everything that made that division exciting is gone.  It doesn’t matter how often TNA claim they are bringing it back, it’s dead.  They’ve seen to that.

It was a feeling that hung over all of Bound for Glory.  The Bound for Gold Gauntlet match, which was basically a Royal Rumble, had all the thrills of an Al Snow cameo.  Oh wait, that actually was an Al Snow cameo.  It even had every wrestler break into spontaneous dance, while being led by the green as grass Mahabali Shera.  It was awful from start to finish and made me embarrassed to spend my time watching this show.  Even the main event, which was actually alright, has been made completely redundant by Matt Hardy dropping the title a few days later, because of some sort of legal action by EC3.

So where do TNA go next?  Well, they go to a tournament for the title which is set to include pretty much the whole roster, including some who had only recently left.  And, dare I say it, it might be exactly what they need.  The opening matches of this tournament have been set up nicely.  It gives everyone involved a purpose and TNA have gone to a sports-like feel for the action.  It’s set up some interesting matches and suddenly, TNA looks different again.  It’s not WWE 2.0, but its own show.

Now we are only a show or two into this change and there is no guarantee that TNA will keep this up.  If nothing else this tournament can only last so long and we don’t even know if TNA will still be on TV when it’s finished.  However, in the here and now it suddenly seems to be an interesting promotion again.  They’ve gone back to basics and that is exciting to watch.  Whether we will ever reach the heights of that early X Division stuff, I doubt it, but this could maybe be a starting point for moving in that direction.