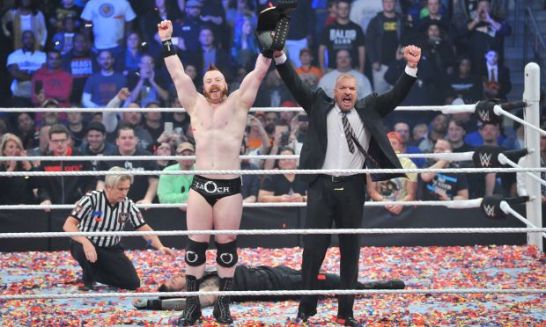 I am fed up of moaning about WWE.  The amount of wrestling I watch on a weekly basis fluctuates wildly and yet the amount of complaining I do about the WWE is consistently high.  I’ve had enough.  So from now on I’m not going to bother.  With ICW and NXT, the two other shows I watch regularly, I have more than enough good things to critique.  However, that doesn’t mean I’m going to stop talking about WWE.  I love it too much to do that.  So instead, it is time to focus on the positives.

To kick start that I am coming to someone’s defence.  Our new WWE Champion Sheamus to be exact.  Sheamus get’s a lot of flack, I mean if you looked at Twitter following his title win you would have thought the world had ended.  And sure, he has been booked awfully recently.  Trading wins and random pairings with another victim to that system, Wade Barrett, have left him floundering (I’m getting awfully close to moaning) but none of that changes the fact that he is a good talent.  Here’s why.

First off, can you name a genuinely bad Sheamus match?  Not a dull one, I did see his feud with Orton, but a bad one.  One where he has fucked up, in say, the way Alberto Del Rio did with Kalisto on Raw recently?  I can’t think of one.  Oh, I’m sure there’s an example somewhere, there always is, but the point is it is rare.  He is a good worker, often a great one.  His hard-hitting style feels legit and for a guy his size, he can really move.

And it is important right now to have someone who feels legit.  Sheamus is a big bloke and no one would pick a fight with him in a hurry.  Now I’m not Vince McMahon.  I don’t have a muscle fetish, but at a time when WWE is lacking legit heels this is important.  A few weeks of Sheamus bulldozing through opposition and he becomes a monster.  For a guy his size, it really is as simple as that.

So he looks the part and he can work, two out of three parts of the perfect wrestler.  Therefore, it must be the character that is letting him down and I must admit, the Irish warrior isn’t working.  It’s all a bit cliched and has been done before, but it doesn’t mean it can’t work.  With The Authority behind him Sheamus doesn’t have to be a master of the mic, Triple H and Stephanie can do it for him.  To start with, why not just turn him into a silent killer.  A guy who gets the job done.  As time goes on let him talk more, let him explain how kicking people in the face makes him feel good.  Make him an really bad guy.

Sheamus has all the parts to be a great WWE Champ and I genuinely think he could pull it off.  Will he?  Well, I’m trying not to be negative so I’ll just say who knows.  If booked rightly Sheamus can become a genuine beast for Reigns to slay and I hope the WWE audience see that soon.