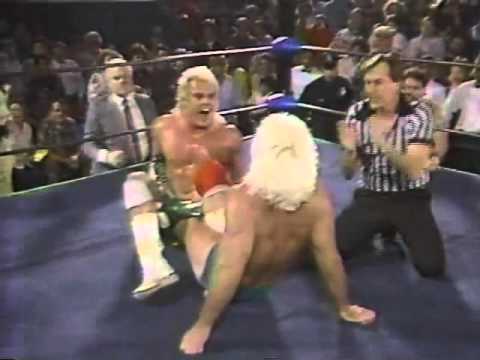 Some of these images might be from other matches between the two. They are also quite low quality.

The name Ric Flair will pop up time after time in this series and more than once it will be placed next to the name Barry Windham. The first 5-star match the Nature Boy took part in was for the NWA Title at Battle of the Belts 2. This is also the first time that one of these matches take place in America, as Flair finally does enough to turn Meltzer’s eyes nearer to home.

And trust me when I say that this is Flair at the peak of his powers. Telling the world how great he was seems a bit pointless, but I’m also aware that there are people out there that see him as an embarrassing old man rather than one of the best of all time. By this point, he was a three-time NWA Champion and in peak physical condition meaning he is truly something special. 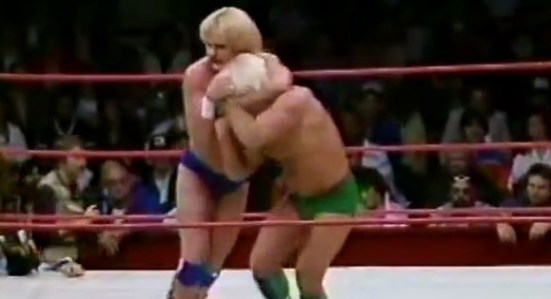 Not the most exciting photo if we are honest.

It’s conditioning that he needs in this match as Windham and Flair go for well over half an hour. Perhaps because of that, it starts quite slowly after an initial burst of pace from Windham. It’s an excellent example of how you can still make the basics interesting. Windham opens this match by getting the better of Ric in a series of simple chain wrestling situations while Flair stalls. However, the selling of these moves and the intensity with which both men apply every hold keeps your eyes glued.

When handed a Ric Flair five-star match it is easy to focus on Flair and Flair alone. We all know how good he is and assuming that all the credit needs to be directed at him is easy. To do so is to miss out on the equally talented Windham. His feud with Flair is legendary for a reason, and he eventually took his place in the Four Horsemen with his old rival.

From the days when a sleeper hold did something.

In this match, he does as good a job of making Flair look good as Flair does for him. As mentioned, both men are absolute masters of the simple stuff, and the importance of story-telling in wrestling shines through here. Windham gets more of a reaction from a Boston Crab than the Cruiserweight Division have been getting from the spectacular on recent editions of Raw. The way he bangs his head while he desperately tries to get Flair to tap out turns an every day hold into something that could win a World Title.

This means when Windham locks in the Figure Four on Flair it feels like it is impossible for him to survive. As the Nature Boy desperately crawls to the ropes Windham (who by this point has been busted open by a series of punches) puts everything into causing his rival as much pain as possible. If that Boston Crab was as effective as it was, imagine how powerful the Figure Four is?

Windham looking a bit beat up.

Even with tiredness setting in for the wrestlers, the end of this match is a gripping ride as the two of them trade their biggest blows. The finish comes off a crossbody to the outside where they desperately brawl as they try to reenter and for the second time this series the match ends on a double count-out. It’s a finish that can be deflating, but much like Tiger Mask vs. Dynamite Kid, I think it works. Windham, as the babyface, has thrown everything at the champ and yet by hook or by crook the dastardly Nature Boy survives to keep his belt for another day.

If you put this next to modern day wrestling it would be incredibly easy to dismiss it as dull. The biggest impacts come from suplexes and hip tosses, and the rest of the match is played out more like a game of chess. It ebbs and flows as both men work to take out the opposition with submissions and punches. However, it’s the joy of wrestling that you don’t need the incredible to capture a crowd. Windham and Flair tell a story that is more effective than any moonsault. If you have any doubt as to whether Ric Flair is truly one of the greatest of all time watch this match and those doubts will be quelled. You might just discover that you’d placed Barry Windham up there right alongside him

One thought on “Meltzer’s Classics: Ric Flair vs. Barry Windham”