Following Inside Out was always going to be tough for Pixar.  It is arguably one of their best, which is no short order in a filmography as strong as theirs.  The decision to release another film in the same year was just asking for comparisons to be made.

In an alternate world where the meteor missed and the dinosaurs survived, they have now evolved.  They can speak and have developed farming skills.  It’s in this reality that we are introduced to Arlo, a young dinosaur whose parents run a farm while his two fun-loving siblings help.  On the other hand, Arlo is scared of everything.  From the chickens he feeds each day, to his own shadow.  When he is swept downriver with a little critter (or human boy) called Spot, he must battle these fears in order to make his way home.

It is hardly a revolutionary plot and it is a journey we have seen a million kids films tread before.  Child gets lost with trusty companion.  Child must find its way home.  Child has adventures along the way.  However, few kids films have ever looked as beautiful as this one.  The world around Arlo is stunning and I swear the water often looks more alive than the real stuff.  When it comes to this style of animation Pixar are the best and you can see the love that has been poured into every frame.

There are also some really cool character ideas here.  Spot is all kinds of fun as he scrambles on all fours attacking anything that gets in his way.  He’s part human part loyal dog and I would be willing to bet that he is the one that children will remember coming out of this film.  While a gang of cowboy T-Rexes that Arlo meets on his adventure shows Pixar’s creativity off perfectly.  Their unusual stance makes them look like they are riding horses and as they hi-yah themselves along you can’t help but marvel. 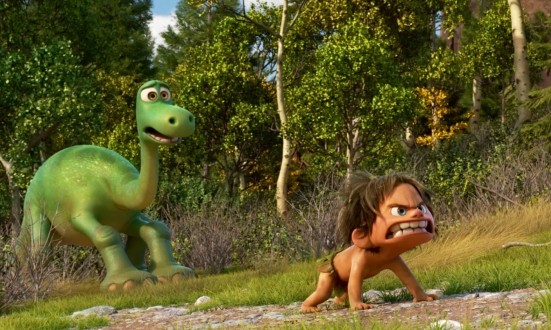 So the only real problem is the plot, which yes is as A to B as you get and it’s a shame.  Because there is a lot to love in this film.  The production troubles it has faced have been no secret and it comes across in the final piece of art.  Visually this is stunning, but the storyline struggles to keep up with what is happening around it.  Despite that, it still hits often.  There is laughter and there are tears and while the story is utterly forgettable, there are moments that linger in the mind.

It is still a Pixar and that means it is made with more heart and soul than 90% of films you will watch this year.  Is it them at their best?  No.  But it is still them and that alone makes it worth a watch.