Deadpool’s journey to the big screen has been a tough one.  It went through the horror that was X-Men Origins: Wolverine and the destruction of everything that makes that character beloved. If one good thing came out of that, though, it brought one of its biggest fans into the fold, and Ryan Reynolds has fought tooth and nail to bring an adult version of that character to life.  When test footage was leaked online in 2014, the fans response was huge, and Fox finally gave into demand and greenlit a relatively small budget version of the Merc with a Mouth.

So is there any chance that director Tim Miller and Mr. Reynolds can live up to that fan expectation?  Well, yes.  At least on one hand.  Deadpool is funny, very funny in fact and Reynolds is Wade Wilson.  The fourth wall breaking and crude humour that defines that character are perfectly realised on the big screen, and it is in its full-blown vulgar mouthed beauty.  While the violence has a gruesome aspect that you won’t see in any other big-screen superhero film.  However, it is also nowhere near as funny as it thinks it is and is severely lacking in plot. 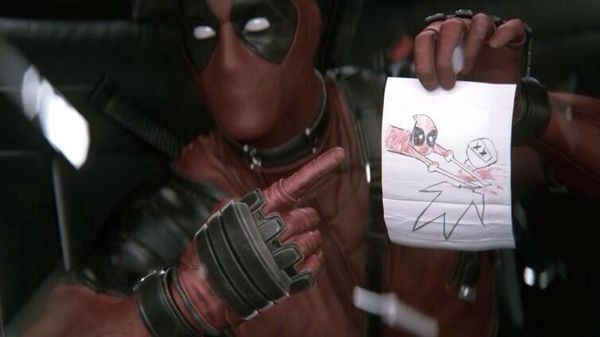 Because for every fourth wall breaking quip about X-Men timelines there are a handful of jokes that don’t hit.  The constant dick jokes quickly grow stale and cuts to footage of him wanking with a unicorn are unlikely to get a laugh from anyone over the age of 15, which considering it is a 15, seems a mistake.  It’s childish humour and while the better jokes in the film are similar, they, at least, have a degree of brains behind them rather than just shouting bums at the screen.  (That never actually happens, but it might as well.)

The plot is also lacking.  We follow Wade’s transformation from simple merc to deranged merc and then his quest to gain revenge on those that wronged him.  There is also a half-baked love story which frankly isn’t even worth the time it would take to write about it.  It’s simple at best and at worst just gets in the way of Deadpool stabbing someone else.  The flashbacks to his pre-Deadpool days are also a bit dull and when you have such a vibrant and exciting character, why take him away from the audience?  Surely this, the most out there of superhero movies, could have had the balls to avoid an origin story?

Don’t get me wrong, Deadpool is brilliantly good fun, and if you are a fan, you will enjoy this.  However, you can’t help wondering if it could have been even better.  When you take the fourth wall breaking and dick jokes out, it is just another superhero by the numbers story and considering the risks Fox were taking, they could have done so much more than that.  With the money it has made already, let’s hope that when it comes to sequel time, they are willing to take more of a risk with things apart from the central character.