When Star Trek boldly made its way back onto our screens in 2009, it was entering an uncrowded marketplace. Star Wars seemed dead, and sci-fi epics of the space-faring kind appeared to be on the backburner. JJ Abrams responded in style making a Star Trek that took elements of its War like cousin and rewrote the Trek rulebook. In 2016 the market looks very different. JJ has jumped ship, and Star Wars is suddenly the biggest thing in space again. So where does Star Trek go next?

Well, firstly it goes to Justin Lin, the man who can take at least some credit for the ridiculous thing that is Fast & Furious being one of the biggest franchises in the world. They also handed script writing duties to cast member Simon Pegg and Doug Jung. With those three on board, Paramount set them the insane challenge of putting together a film in roughly eighteen months. Somehow they pulled that off and in doing so seem to have made a conscious effort to return to Star Trek’s roots. 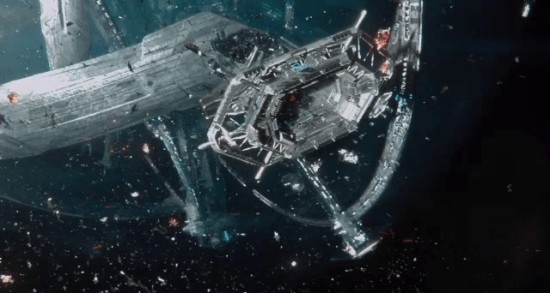 Sure the epic space battles are still there, and this is film was made for $185 million, but Star Trek Beyond feels more like an episode of the Original Series than it does a space opera. It’s conducted on a relatively small scale and at its heart, it isn’t really about the bad guy or the fight at hand, but the crew of the Enterprise and how they deal with the situation they’ve been dropped into.

That situation finds them split up on a strange planet with the villainous Krall (Idris Elba) out to get them. That splitting up gives us some partnerships that we haven’t seen before. Kirk (Chris Pine) and Chekov (Anton Yelchin), Bones (Karl Urban) and Spock (Zachary Quinto), Uhura (Zoe Saldana) and Sulu (John Cho) and finally Scotty (Simon Pegg) and Jaylah (Sofia Boutella), a new character that they meet on this planet. These combinations are the heart and soul of the film, and it is through them that its best moments come to light.

And it has to be said that a lot of those moments come through Bones and Spock. Karl Urban has spoken openly about being reticent to come back for this film, feeling like his character had been sidelined in the past. Well, this is his redemption. Spending time with him and Quinto is just fun. The two have a very natural chemistry, and that needling relationship works wonderfully. Scotty and Jaylah are also a pleasure to be around, and Sofia Boutella would be an excellent addition to the full-time cast if they go that way. Her character’s arc throughout the film is nicely realised, and her relationship with the rest of the crew already feels strong.

The problem with such a heavy focus on the crew is that once again we are handed a villain with little to say for himself. Idris Elba is a great actor, but even a third act twist doesn’t give Krall enough personality for us to care. It’s in characters like him and the fleshing out of certain ideas that the quick turnaround really shows itself. He’s a bad guy, and he wants to kill some folk, that’s all there is to it. 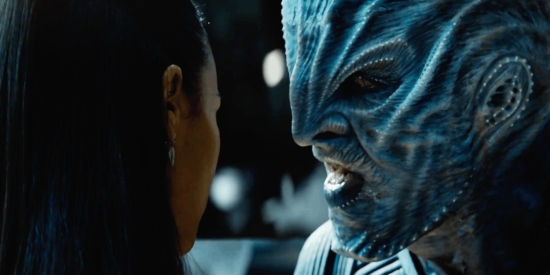 As the film enters said third act, though, it also delivers one of my favourite set pieces of the year all set to a blistering soundtrack. I won’t spoil it here, and I’m sure there will be many who take issue with it, but as it throbbed out of the screen, I was left with a huge smile plastered across my face. Some Inception style gravity fights in the rather impressive Federation outpost of Yorktown don’t have quite the same impact, but it doesn’t take away from the joy of that sequence.

In fact, it’s not only York Town that looks impressive. Krall’s opening attack on the Enterprise will take some beating in the space battle sequences this year, and it’s when Lin’s distinctive style comes to the fore. On the flipside, the much-maligned motorbike scene from the trailer is not much better on film. It feels out of place with everything else that is going on and might be too much of a concession to Lin’s past.

Despite that, Star Trek Beyond is a two-hour blast of fun that just speeds by. Is it perfect? No, of course it isn’t. However, in a summer where a hell of a lot of blockbusters are failing to hit this one made me laugh and it made me punch the air, and that’s all I needed. In fact, at times it even made me tear up as it handles the passings of both Leonard Nimoy and Anton Yelchin with a touch of class. This is a good film, and you can go in, sit back and relax in its company.