The backlash against Pixar’s recent influx of sequels has been quite a strange one, particularly when you consider the studio’s third film – Toy Story 2 – was a sequel. Despite that, there is no denying that when Pixar have gone beyond original properties, the quality has dropped – unless we are talking about said toys. It doesn’t matter how much you complain, though, thirteen years after Finding Nemo we are back under the sea again and this time, we are Finding Dory.

Unlike the first time around, this doesn’t involve Dory going missing, however. Instead, this is a more a journey of discovery for Ellen Degeneres’s forgetful fish. We go back into her past and watch her family try and prepare her for life in the big ocean. Unfortunately, before she’s ready, her forgetfulness leads to her getting lost and we see her wander the sea until she bumps into Marlin (Albert Brooks). This brings us to where we left the last film and a year after the adventures of that Dory finds some memories creeping back and she determines to go and find her family. 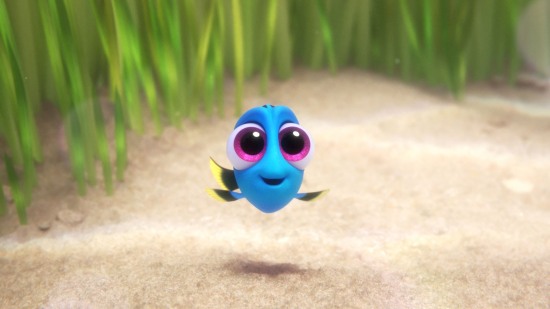 This set-up leads to some genuinely heartwrenching moments. There is a sadness to watching Dory’s parents try and teach baby Dory (who if there was a cutest character Oscar would already be the winner) how to remember things because we all know she is going to get lost. When she eventually begins her hunt for her family, it leads to some classic Pixar moments where the emotion leaves more than one person in the audience reaching for the tissues.

There is also an incredibly positive message here about living with a disability. Dory’s search for her family brings her to a Marine Life Institute where she meets a host of fish that suffer from disabilities in the same vein as her. There is Destiny the Whale Shark (Kaitlin Olson) who is short-sighted and Bailey (Ty Burrell), a beluga whale who has lost confidence in his echolocation abilities. It’s Dory and her unrelenting ability to see the best in everything that teaches these fish how to get past these problems. She realises that her short term memory loss is what makes her who she is and doing what Dory would do is a pretty good thing.

That beautiful message aside there is no denying that this film will suffer in comparison to the original. There are still some brilliant sea-life related jokes with Hank the sectapus (Ed O’Neil) and his camouflaging ability leading to some stupidly inventive scenes. While Idris Elba’s short appearance as Fluke – a sea lion – sets up some of the funniest moment in the film. Yet, it also loses the wonder of the original. When they need to cross the ocean it is no longer an epic quest but quite a simple jaunt.

There is also no getting past the fact that it isn’t anywhere near as funny. There is still a handful of laugh out loud jokes but they aren’t as regular as Pixar’s best and while the emotional stuff hits the fun doesn’t always follow behind it.

Despite these problems Finding Dory is still a success. It’s a good film that has a wonderful message at its heart. In fact, if any other studio released it, it would be hailed as a masterpiece. It is when you put it next to their best that it fails to hold up. However, it can very easily claim to be the best sequel they’ve done without Woody in it, and that’s at least something that can be waved in the face of those that are suddenly on Pixar’s back.