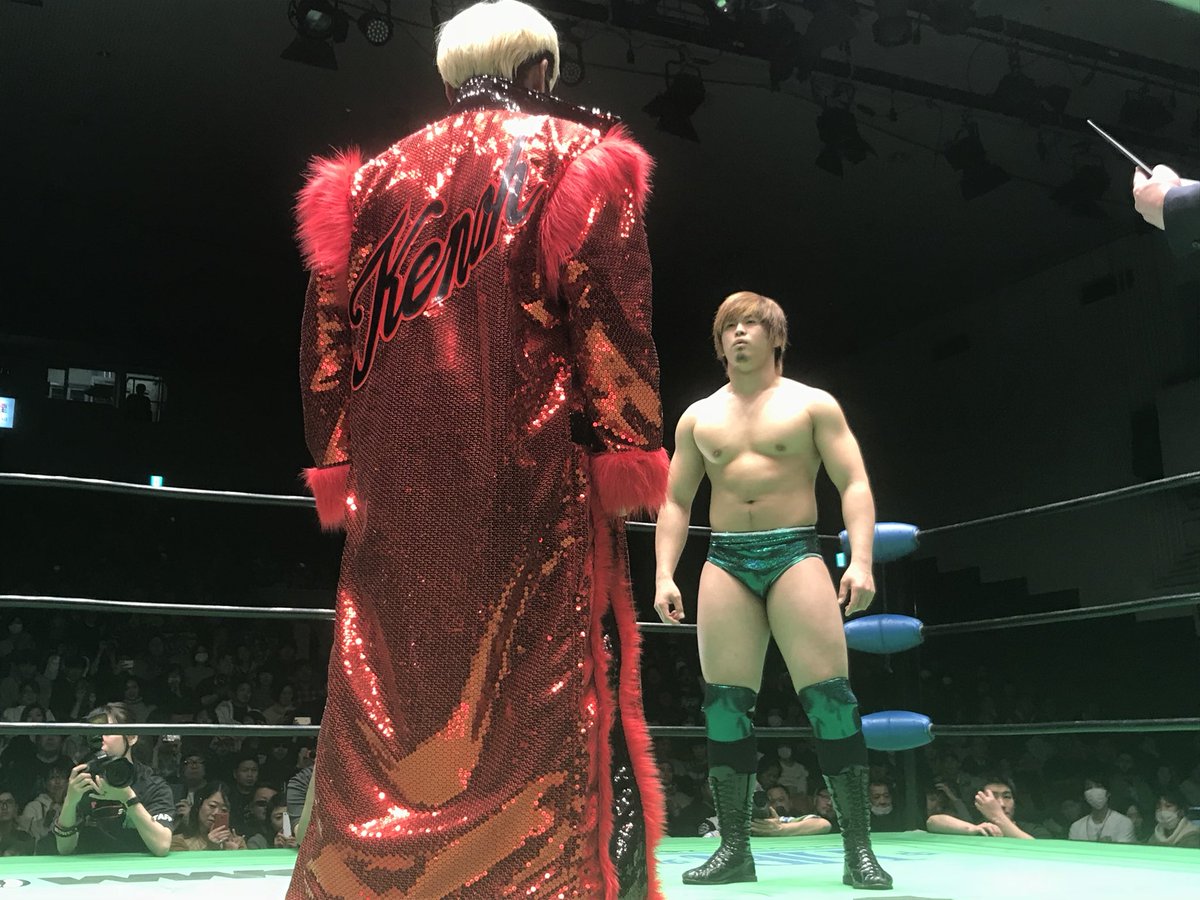 Stepping up to the champ. Credit: NOAH

I’ve decided to kick off the New Year be checking out Pro-Wrestling NOAH. By all accounts, NOAH has had a tough few years, but they are beginning to come out the other side. That makes me think it’s a good time to jump on board.

I should point out that I am coming in with little to no knowledge about the wrestlers or the storylines. This is what the kids call a ‘noobs’ review of NOAH. If you know what you are talking about, there is a chance it will infuriate you. Please don’t take that out on me, I’m only having fun. Let’s dish out some stars.

From what I can gather, this was a classic Young Boy vs veteran battle. There wasn’t much more to the story than that because it didn’t even reach the minute mark. Miyawaki started quick, trying to catch Ogawa off-guard. It didn’t work. Around twenty seconds in Ogawa caught him with a backdrop and got the pin.

It’s not even worth giving this a rating. It was a straight up squash which as someone who is used to watching the current crop of NJPW Young Lions caught me off-guard. I’ve no idea if there’s a story being told here or if just is what it is. Hopefully, the future will present that information to me.

It’s nice to see it’s not only New Japan that suffers from crowd brawling. Hall, Nagai and Miyamoto attacked before the bell, and everyone split up for a bit to do a whole load of nothing.

Sadly, when they got back to the ring they didn’t do much more. This was another match that didn’t have a lot going on. There was a bit of back and forth with Saito showing some impressive agility for a bigger dude. Then, before it could get going, Nagai would get the win with a knee from the top-rope.

Nothing about this offended me, it just didn’t do anything for me either.

There was a post-match promo from Nagai where I believe he and Maybach Taniguchi (more on him later) were challenging Storm and Yone (who are the GHC Tag Team Champions). I didn’t learn Japanese, I had to look that up.

Do you know what’s fun when you’re watching a promotion for the first time? Ten-man tags where you can’t understand the commentary and don’t have a clue who anyone is. So bear with me if this is lacking in detail.

Despite that general confusion, I quite enjoyed this. It was worked fast and stiff with Daisuke Harada, Minoru Tanaka and Hajime Ohara (I think) standing out. This was the first match on the card where I felt like the wrestlers got the time and space to impress. Which is ironic because it was clearly heavily edited for TV.

The action would come to an end when Seiya Morohashi fought through LEONA working his leg to pick up the submission victory. While this was far from a classic, it was a lot of fun, and if you get a chance, you should check it out.

Jay Bradley might be known to some as he’s popped up in both WWE and Impact. I have to admit, I didn’t recognise him at first glance, and I’m still not entirely sure he is who I think he is.

I should at least remember him now, as he started fast, bloodying Takashi Sugiura. He works that big brawler style and it fits in nicely with NOAH’s stiffness. There was a headbutt to the chin which looked particularly brutal here. It’s a shame, therefore, that this was another match that was cut to bits (something that is going to take a bit of getting used to) which interrupted the flow.

In spite of his impressive performance, it wasn’t to be Bradley’s day. After going for The Boomstick, he was caught in a German, followed by a running knee and an Olympic Slam for a Sugiura win. This was decent enough, but the editing and a lack of time hurt it. I’d like to see what these two could do without all those issues.

This was a weird tag match. Mainly because it never felt like two tag-teams. It came across as four wrestlers having snippets of singles matches rather than working together. I have no idea if any of these men team regularly or not, but it left it all feeling a bit disjointed.

In saying that, there were still things to enjoy. Go Shiozaki and Katsuhiko Nakajima had a nice section in the middle. NOAH doubles down on that stiff, strike heavy style, and I love it. In many ways, it’s what you expect Japanese wrestling to be when you are getting into it for the first time.

Unfortunately, the final stretch wasn’t quite as thrilling. Kitamiya and Kotoge plodded over the finishing line with Kitamiya getting the win via submission. It was a damp end to a match that shone in places and yet ultimately failed to sparkle.

Guess what guys? I did some research! Marifuji and Maybach Taniguchi have a bit of history having both teamed and feuded in the past. In fact, at last year’s version of this show, Marifuji defeated Taniguchi by knockout. This somehow led to them teaming for the rest of the year right up until Taniguchi was a nasty bastard and turned on Marifuji. A storyline that continued into this and its DQ finish.

Before this ended in shenanigans, it was a decent showing. Marifuji seemed determined to repeat last year’s achievement and was dishing out some sweet kicks. However, Maybach was giving as good as he got and was hammering at his former partner.

Sadly, just as it was getting exciting a face from earlier in the night (Mituya Nagi) got involved to aid Taniguchi and we walked into a DQ. I’m willing to let it go because they are setting stuff up for the future, but I’m still sad it got cut off when it did.

Seeing the X-Division Title being defended in Japan is weird. While I used to love that division, it hasn’t meant anything in a long time.

It also led to a Dragon Gate match breaking out at a NOAH show. As I’ve made clear, I’m no expert, so feel free to correct me if I’m wrong, but this flippy style felt out of place on the card. These two were working lighter than everything that came before them and with it being the semi-main event that felt weird. A show should ramp up the intensity, not suddenly dip.

And you know what, that would have been fine if it hadn’t felt like a pretty standard flippy match. You won’t find many people who love the flips more than me, however, cartwheeling out of a head scissors just ain’t that impressive anymore. Ricochet and Will Ospreay made sure out of that.

More than that, though, this felt disjointed. Like two men moving from section to section. It had its moments. A sick frankensteiner from Everett and Ishimori’s lovely 450 being the highlights. Unfortunately, it wasn’t their day. Maybe next time.

Once again, I actually know the storyline for this one. Kenoh beat Eddie Edwards for the GHC Heavyweight Title and promised to bring NOAH back to Budokan. That brought out Kiyomiya who was returning from his excursion and fancied a shot against the new biggest boy in town.

I’m glad I knew that story coming it because it is essential to this match. Kiyomiya was bursting with fire here. He was going to throw everything he had at the champion and damn did he work his little green trunks off. That top-rope reverse DDT was particularly scary, and he did a perfect job of portraying someone who saw this as his big moment.

However, it wasn’t his big moment. It was merely his first moment. I didn’t need to know anything about Kenoh to see that he was at the top of the food chain. His actions in the ring said that. Kiyomiya may have rocked him a couple of times. He might have even scared him once or twice (the Tiger Suplex being the second example), but when Kenoh was in control, he was calm. He knew he could beat this young punk, he just needed his chance.

When he got that chance, damn did he take it. Three absolutely brutal kicks to the head of Kiyomiya (with the visual aided by the fact his nose was already bleeding) meant he didn’t only win, he did it by knockout. When push came to shove, he wasn’t merely better, he was dominant.

And, I think, that’s okay. I suspect this won’t be these two’s last battle. In fact, it might be the first of many. Kiyomiya went straight after the big guy, and the truth is he got a bit ahead of himself. Next time he’s at this level, there’s every chance he’ll be the one picking up the win.

Post-match Kaito refused to just walk away slapping Kenoh and then slapping everyone else who got in his way. He needed to be physically dragged out of the ring so desperate was he to continue the fight. It a lovely post-script to a match that already told a fantastic story. I have no idea how Kiyomiya is viewed in NOAH, but he’s a star in my eyes.

I apologise to any hardcore NOAH fans that have stumbled upon this review. Writing about a company for the first time is kind of intimidating. You’re dropped straight into an evergoing world and have to figure out what the fuck is going on. I don’t think I did a particularly good job, but come the next one I’ll hopefully do better and so on and so forth.

As for the show itself, I really enjoyed it. While my star ratings might not reflect that, a lot of those were down to other circumstances. The main event was fantastic, and the rest of it was very watchable. I will 100% be back in the future, and hopefully, you’ll all give me another chance to review it too.