Money In The Bank has become one of WWE’s better shows. A lousy ladder match is still an improvement on most things and even in the confusing storylines of WWE the briefcases add an element of enjoyable chaos. Will it be the show to help them break their recent run of mediocrity? I bloody hope so.

END_OF_DOCUMENT_TOKEN_TO_BE_REPLACED

I don’t think I’m ever going to forgive myself for spending part of my May Day holiday being punished by WWE. Let’s get on with it.

END_OF_DOCUMENT_TOKEN_TO_BE_REPLACED

WWE in Saudi Arabia, if that isn’t the fuse to a potential shitastrophe, I don’t know what is. If you’re interested in my opinion on the political side of this, I’m going to get into it at the end. It means those of you who don’t give a crap what I think can read the review and then x out before we get serious. Fair? Right, let’s see what went down at The Greatest Royal Rumble.

END_OF_DOCUMENT_TOKEN_TO_BE_REPLACED

I spend a lot of time moaning about WWE. However, when that sign goes up and we all start pointing at it, I get excited. Part of that is down to the many great shows going on around the big one, but let’s not pretend I don’t love WrestleMania. Even as it trickles into its seventh hour and pisses me off for the sixth time, there are few things I’d rather be doing. It’s ‘Mania! Let’s have fun.

END_OF_DOCUMENT_TOKEN_TO_BE_REPLACED

Clash of Champions’ card was the dictionary definition of a brand-split PPV; full of multi-man nonsense and bad gimmicks. It had the potential to be alright, but the wrestlers would have had to work their arses off to get there. Sadly, that’s not quite what happened. Let’s dish out some stars.

END_OF_DOCUMENT_TOKEN_TO_BE_REPLACED

Back in 2010, The Miz became the WWE Champion. Having entered the company as a joke, the former reality TV star reached the top of the mountain and in doing so proved everyone wrong. And he didn’t do this the easy way. This wasn’t a Roman Reigns style anointment from the McMahon’s above. He scratched, and he crawled, and he turned people that had previously hated him into fans. He was truly awesome.

END_OF_DOCUMENT_TOKEN_TO_BE_REPLACED

The Cruiserweight Classic’s First Round is over, and it has quickly become one of the highlights of my wrestling week. A fast-paced show the five to ten-minute matches have given us the taste of how talented some of the competitors in this tournament are.

END_OF_DOCUMENT_TOKEN_TO_BE_REPLACED

After Raw’s rather successful reboot on Monday night, SmackDown followed suit with their first proper live show on a Tuesday. While I obviously want Raw to be great, I really want SmackDown to succeed. My wrestling education was birthed in the technical excellence of Paul Heyman’s SmackDown, and it has genuinely pained me to see the Blue Brand fall away over the years.

END_OF_DOCUMENT_TOKEN_TO_BE_REPLACED

For the second time in its history, WWE has gone draft crazy with last night’s SmackDown Live signalling the start of a New Era – although how that fits into the last one, I don’t know. Like most of these events, the actual show itself was a bit of a disappointment, with the awkward podium sections not hiding that most of the matches were throwaway at best. Even the main event was hardly a classic. However, it’s got us where we need to be and after Battleground we will have an all new WWE. So how does each roster look going into that new world? END_OF_DOCUMENT_TOKEN_TO_BE_REPLACED 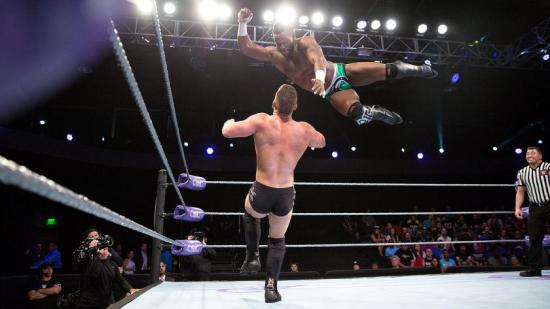 Last night WWE aired the first episode of the Cruiserweight Classic, their tournament involving thirty-two of the best cruiserweights in the world. It’s entirely new territory for the company, and you only need to glance down the list of names to get excited. In this piece, I’m going to have a look at the first episode reviewing it in three separate areas: presentation, commentary and in-ring action.