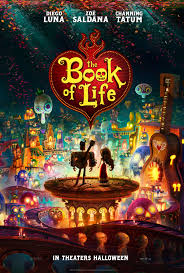 It’s been a mixed year for animated films.  On one hand we have had the brilliant Lego Movie and the wonderfully dirty Box Trolls.  On the other hand, there has been a lot of crap.  Films like The Postman Pat movie seemed to fail on nearly every level.  The latest fighter to enter the fray is The Book of Life, a film, which at least on paper due to the involvement (as a producer) of Guillermo Del Toro, looks set to be a prize fighter.

Despite such heavy hitters, The Book of Life has a plot that lacks originality.  There is a bit of everything from Romeo and Juliet to Disney’s Hercules in there and it does hurt the film.  We start with a group of unruly kids making their way to a museum, where they are led to the Mexican room and eventually told a story by their tour guide.  That story encompasses a wager placed between two god like figures, La Muerte, (Kate Del Castillo) the ruler of the Land of the Remembered and Xibalba, the ruler of the Land of the Forgotten.  Wagering over the chance to rule the Land of the Remembered, where the party seems to never stop, they each choose a young boy, with the winner being the one who’s champion marries their young female companion.  It’s a story as old as time and while it is set up that way, they do little new with it, apart from throwing a Radiohead song in there.

However, what it lacks in story telling chops, it more than makes up for in animation.  This is a beautiful looking film, with the main story told by characters which appear to be wooden dolls come to life.  Whether it is the setting of Mexico itself, or the vibrant Land of the Remembered, it’s a colourful, over the top film that is a joy to watch.

The voice cast also do their job well and the likes of Channing Tatum and Ron Pearlman have no issue getting their charisma across.  While the screening I was in saw all the children in attendance seemingly taking a lot of joy out of it.  Sometimes how successful a children’s film is, can be based on how well behaved the children are and despite some worries from me, they were all silent throughout, unless they were laughing.

Book of Life is not one of this years best animations, but it is definitely in the positive category.  It’s just an enjoyable film to watch, with the wonderful world that director Jorge Gutierrez and his co-writer Doug Langdale have created being one you wish to get lost in.  What it lacks in story telling originality, it more than makes up for in excitement as bull fights and bandits parade across the screen in a host of colours and bangs.  I have to say that I would recommend The Box Trolls ahead of this, in the alternative animation race, but if you have already seen that and are looking for something to keep the children – no matter how old they may now be – entertained, then this will be the film for you.