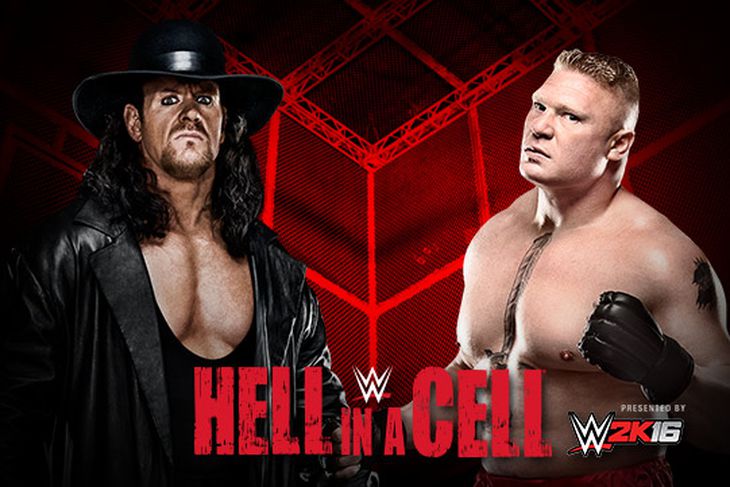 Hell in a Cell.  Once upon a time those four words meant something.  A match retained for only the biggest of moments.  The debut of Kane, the fall of Mick Foley and just a few years ago the end of an era when Undertaker and Triple H took to one at Wrestlemania.  However, recent times has seen the cell devalued.  Matches often flattering to deceive and a yearly PPV, stacked with feuds we don’t really care about.

Yet this year the show is actually headlined by a match that feels worthy of the Cell.  Lesnar vs Undertaker part three.  A match that should feel like a battle for the ages.  Instead, we have a poorly promoted feud.  Seemingly based around video packages and a last-minute decision to hold it here rather than at Wrestlemania.  This match could still be great.  If Taker can draw from that well one last time, but it’s a damn shame that I’m not that excited about it.

The exact same thing can be said of the other Cell match.  Roman Reigns and Bray Wyatt both have plenty of upsides, but the thought of the two of them in a Hell in a Cell match still fails to get the goosebumps raised.  This feud feels like it has been going on for years and I honestly can’t see how both men can come out of it looking great.  Wyatt needs to win matches and yet WWE’s determination to make Reigns the man suggests there is no way he’ll come out of here with a win.  Unless of course there is funny business, in which case it’s the cell itself which takes the hit.

It says a lot about WWE’s current booking that we come to the title match third.  Rollins vs Kane is boring, it’s as simple as that.  No one believes that Kane will win and while I have the upmost respect for the man.  He is just not capable of great matches anymore.  Cena’s Open Challenge will be more interesting, particularly with John about to take some time off.  Will we see Ziggler take the belt off him to inspire a Total Divas based feud?  Or could we see Rusev and Lana reunite to steal it back?  Both of these guys are in the pre-show match, but then again so are most of the people you could see stepping into this spot.

Ryback vs Kevin Owens could be great, but WWE seem determined to not let Owens wrestle.  I’m all for establishing the heel, but Owens should be a legit threat inside the ring as well.  Meanwhile, The New Day vs The Dudley Boyz (can they please ditch the Z and while they are at it stop saying wassup as well?) already feels over exposed.  WWE seems to have lost the art of long feuds and just a couple of months after their return the Dudleys have already lost their shine.

Finally, we’ve got Charlotte vs Nikki Bella which will hopefully spell the end of this section of the Diva’s Revolution.  With all the focus having been on Paige’s increasingly frustrating character, I can’t see this ending in anything but shenanigans.  However, it would be nice if we could get a nice clean Charlotte win so we can get back to establishing these women as real characters and letting them do what they are damn good at doing.

Hell in a Cell hasn’t started yet and I’m bored.  I’m bored with being fed the same shit by WWE week after week, month after month.  This week ICW sold out the SECC, the biggest UK wrestling card since Giant Haystacks vs Big Daddy at Wembley Arena.  They also have an On Demand service, cheaper than the WWE Network, which can be found here.  If you want my advice.  Ditch Hell in a Cell this weekend and get on board one of the most exciting wrestling companies in the world.  Because it just ain’t worth your time anymore.

One thought on “Hell in a Cell Preview”