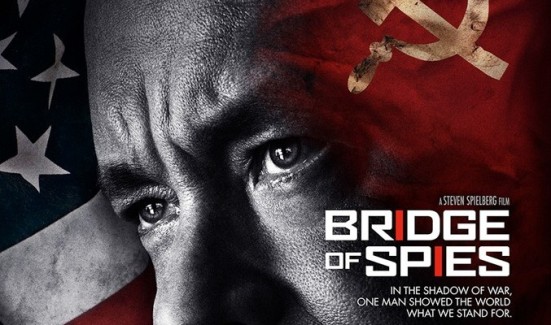 While in a perfect world you want to enter every cinema free of expectations and ready to be wowed, there are times when you know what to expect.  No one goes into the latest churned out Paranormal Activity film expecting greatness.  While walking into a Steven Spielberg directed, Coen brothers‘ scripted and Tom Hanks‘ starring film is more like slipping into a hot bath.  You kind of know you are in safe hands.

Bridge of Spies takes place in the heart of the Cold War.  As insurance lawyer, James B. Donovan (Hanks), is hired by the American government to defend Russian spy Rudolf Abel (Mark Rylance).  This later on earns him the dubious distinction of being sent to West Germany in order to negotiate Abel being traded for American prisoners held by the Russians.  It’s a film full of spies but is definitely not about spying.

What it is about is serious men having serious discussions in serious rooms.  Whether it is a courtroom, an office, an embassy or a prison.  They will talk there, god damn it.  Which on paper could easily be mistaken for being a bit of a slog.  Over two hours of men talking would put even the most hardened Spielberg fan to sleep, but then again, most men aren’t these men.

First up is Donovan, the everyday American who understands how this ‘great’ country runs better than the men who are supposed to be doing the running.  He’s the everyman hero and it is a role Hanks can do in his sleep.  Which in some ways could be damning him with faint praise but there is a reason that he keeps getting these roles.  He makes these characters relatable, even when they could be insufferable.  He is the man that every one of us thinks we are like, but deep down suspect we are not.  Little touches, like the much talked about cold that he picks up in the third act, are subtly acted and epitomise what make Hanks a master of his craft.

And yet he may have met his match in Mark Rylance.  Primarily known for his work on the stage, this is his coming out on the big screen.  He goes toe to toe with Hanks every step of the way and often wins.  Abel is a quiet, unassuming man more interested in his paintings than Bonding it up and once again it is Rylance’s subtle work that makes him come to life.  His stooping walk and questioning eyes make you root for a man that a whole country is terrified of.

There is no denying that both of these men benefit from a strong script, originally penned by Matt Charman and then touched up by the Coens.  It is, of course, impossible to say who wrote what.  However, there are pieces of comedy littered throughout it which seem to have the Coens’ fingertips lightly scattered all over them.  They are moments of levity in an often heavy piece of work and serve to let this film breath.

Something that is of course aided by the director, Spielberg himself.  Bridge of Spies feels like a companion piece to Lincoln.  Cinema which explores exactly what being American is.  Spielberg is at a time in his career when he can say more with a light touch than a heavy one and much of this film is just about letting great actors do their job but his signature is always there and you are never going to forget it is his work.

I think there will be people out there bored shitless by Bridge of Spies.  If you go in expecting a new addition to this years plethora of spy films, you will be disappointed.  However, if you go in knowing what to expect and are willing to it give it the patience it deserves, you will soon found yourself luxuriating in that warm bath.