Another PPV and another chance for me to continue my positive attitude towards the WWE.  Thankfully, for both myself and the WWE, the talent have once again done their job well and it won’t be that hard.  I have to be honest and say I haven’t seen last night’s Raw, although I know what happened, so that shan’t be playing to big a part in this.  With that in mind, what was good about TLC?

First things first, the matches.  As I, and many others, predicted.  The WWE’s talented roster once again rose to the occasion.  From the hectic opening tag, that Salida Del Sol off the ladder was genuinely insane, to the hard-hitting main event, there wasn’t really a dud moment.  Even the chair match, which I had no expectation for, was alright and saw them working well within that awful format.  It all worked, despite the stories that they had to work with.

Secondly, in the whole I think the right booking decisions were made.  It is unusual to have a PPV be this heel dominated.  Even the Kick-Off show saw Sasha Banks going over.  However, it all made sense.  Like them or love them, The New Day are one of the most over acts in the company.  While the WWE has a lot more invested in Del Rio and Rusev than Swagger and Ryback.  The only one I slightly question is Ambrose taking the title off Owens.  I think Owens is a natural heel champ, his arrogance suits it perfectly.  However, even this decision isn’t necessarily a wrong one, it is just not the one I would have chosen. 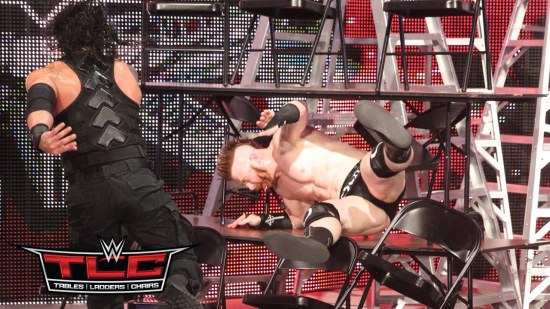 And finally, they got Reigns over.  They got Reigns over to the extent that last night on Raw, they decided to pull the trigger.  This year has been a strange one for our Roman.  They’ve been desperately searching for a character that suits him and failing more often than not.  At TLC, they went back to square one.  He is an ass kicker and is all they should ever be.  There were worries that this was getting too similar to Bryan’s story from two years ago, but last night’s Raw has rectified even that.  There is money in Triple H versus Reigns and I look forward to watching it.

Once again WWE’s talent has at least made an attempt to pull them out of the hole they got themselves into.  It’s now up to them to use the modicum of good feeling they got back from this event and run with it.  Can they do that?  God knows, I just hope that these guys didn’t put their bodies on the line for nothing.  Sorry, positivity.  WOO!