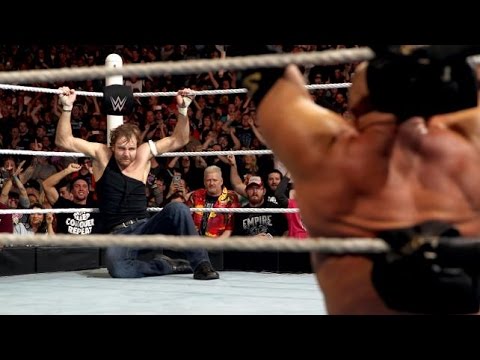 I’m a few days behind the rest of the world, but last weekend WWE put together a glorified house show and streamed it out to the rest of the world via the Network. With only a handful of matches announced beforehand, they bulked up the three-hour-long show on the night and delivered a show that while low on storyline worthy moments, was full of some cracking wresting.

The jewel in the crown of which was Dean Ambrose vs Triple H, a match in which the Game did a pretty good job of reminding the world just how good he can be. What was special about this match was the way Hunter made Ambrose look, Ambrose may have lost but he looked strong and at least for the moment, can claim to have put Triple H down for the three count. He is quickly becoming one of the biggest babyfaces in the company and I hope WWE think about that before they consider turning him heel to feud with Reigns.

The other big match was less of a wrestling match and more of a fight and to be honest, just made me sad about how wasted Luke Harper is. The big guy can go and I’d love to see him and Brock have a longer match. Brock meanwhile continued to do what Brock does and smash. It was a strange move, however, to advertise Wyatt vs Lesnar and then not deliver on it. I doubt many people bought the Network just to see that match, but it sets a dangerous precedent. It does, however, mean they can return to Wyatt and Lesnar later down the road and that could be a good thing.

The rest of the card fell into the solid to good range. We’ve seen New Day vs. The League of Nations a million times and they are going to have to do something special to get people excited for that WrestleMania match. Elsewhere, I would happily watch Sami Zayn do anything, although I don’t think he works as well against the sports entertainment style of Stardust. Finally, Natalya and Charlotte did everything they needed to do, while the finish was a bit stupid, the match was good and it is just great to see two women go out there and get to do their thing.

The only other notable talking point came from Chris Jericho, who had an alright match with Swagger, the American hero who was sent out to defend Canada’s honour. Where this shined was in Jericho’s continued progression into his heel persona, where he has quite frankly found his groove. His face persona before this was hugely cringe, but it is all being elevated by the prick he is playing now and the fact he turned that Canadian crowd against him, is a tribute to how good he is.

All  things said Roadblock was alright. If I’d stayed up to hell o’clock in the morning to watch it I imagine I would have been pissed off at the lack of storyline progression, but watching it later on, I had a good time. I’m still worried that holding an event this close to ‘Mania has impacted their build to that show, but in the here and now, Roadblock gets a thumbs up from me.