WrestleMania weekend long ago leapt passed being a time for just WWE fans to get excited. Wrestling companies all over the world attempt to grab a hold of the buzz that ‘Mania brings by putting on shows of their own. Hence why, just a few hours before WrestleMania itself, I headed through to Glasgow to catch ICW’s effort: Barramania 2.

Despite the general wrestling related buzz there is no denying that this year’s Barramania had a card that was lacking in a little bit of sparkle. Despite that, ICW managed to put together a solid event show with the recently disbanded NAK stealing the day as Renfrew and BT Gunn took on their former brothers Wolfgang and Stevie Boy. Except, Stevie Boy was forced to pull out so Kay Lee Ray took his place and took one hell of a beating for it. Unsurprisingly this match quickly descended into chaos with everything from Kay Lee taking a bump from the ring into two chairs and through a table to Renfrew being driven headfirst into a chair full of tacks. It was a fight rather than a wrestling match but it was damn entertaining for it.

In a similar vein, we finally got to see Joe Coffey get his hands on Red Lightning as he and Grado teamed up to take on ICW’s majority shareholder and his good pal Jack Jester. This match was all set up for shenanigans, and it delivered. However, it did so while being entertaining and at the end of the day, that’s the most important thing.

Elsewhere, we saw Polo Promotions pick up the ICW Tag Titles on their final day in the company. I’ve now seen them and The 55 in the ring together so many times that it has become a bit dull, but they work well together and even with a lingering feeling of deja vu this was an entertaining match. However, it doesn’t change the fact that I’m more interested in where this goes next after Mark Coffey and Jackie Polo left with the belts through the crowd to the fan’s delight.

Less warmly received was Massimo vs. Doug Williams which the crowd seemed to zone out for. With the new TV deal in Italy I expect we are going to see a lot more of Massimo but on the evidence of this match, he hasn’t clicked with the wider fanbase yet. Sadly, the same seemed to be true during Nikki Storm and Sammi Jayne’s Loser Leaves Town Match. The two women put on a great back and forth affair with the pupil finally getting the best of her teacher and spelling an end for Nikki Storm’s day in the company. This was a better match than the crowd gave it credit for and let’s hope everyone was just a bit tired by that stage.

What they weren’t tired for – mainly because it opened the show – was the Zero G Championship Scramble Match. Lionheart’s heel persona just continues to pick up heat and him nicking the title from the stupidly popular Davey Boy by using the Styles Clash – the move that broke Lionheart’s neck – just put the cherry on top. Similarly. Trent Seven and Mikey Whiplash put on the kind of hard hitting match you would expect from those two men. I can only imagine that they are still hurting today from the way they were hitting each other. 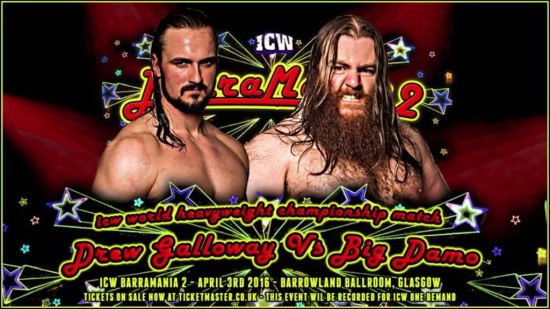 Finally, we have the main event which the fans perked up for a bit. In classic ICW fashion, it hasn’t taken more than a few weeks for a group of fans to have turned on Damo, but the big man is still popular and for good reason. For a guy his size Damo can goddamn move and him and Galloway put on a good back and forth match. Galloway has really embraced his heel role in ICW and he’s almost getting too good at it as fans are starting to cheer him again. Damo picking up the win was the right move, they don’t need another title change now, but they had a couple of close falls throughout which had me fooled.

Barramania was hurt by the moments where the fans seemed to zone out and stop caring about what was happening. The Barrowlands also didn’t feel like a sell out despite them claiming it to be so. Despite that, ICW delivered yet another good show and even if it is not their best, that is still better than most.