There were two key moments in my play through of Life is Strange. The first came early on in the game when I was exploring the grounds of Blackwell Academy, the school within which a lot of the game is set, and I realised that I – in the form of central character Max – was nervous about approaching certain characters. To put it simply ‘the popular kids’. I knew that Max wouldn’t do that so why should I? And besides, what if they were mean to me?

The second key moment came at the end of episodes three when the game introduces a twist. I shan’t spoil said twist and to be honest it’s not the greatest one I’ve ever seen but despite that it bothered me. It bothered me so much that I didn’t go back to the game for several months. Something horrible had happened to a character I liked, and it made me sad.

Which kind of sums up what is great about Life is Strange. It’s not the mechanics or the graphics – both of which are weak at best – but it’s the characters. It’s the people you get to know throughout the journey through its five episodes. Central of which is Max and Chloe.

Life is Strange puts you in the shoes of Max Caulfield, a teenage girl attending art school and working to be a photographer. Oh and she discovers she can rewind time. Over the next week or so her life is thrown upside down, and she and her best friend Chloe are sent down a path that to be perfectly honest, is sometimes a bit daft. The actual plot isn’t that great. It’s convoluted and messy and overcomplicates itself. However, those two central characters and a few of those that surround them make it all worth it. 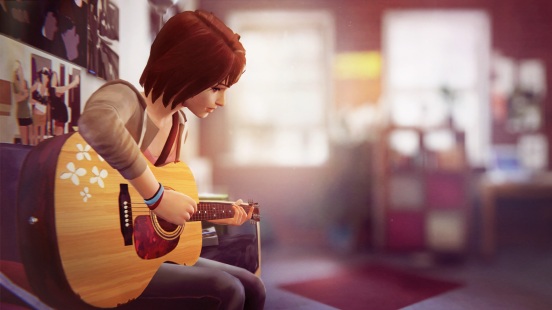 Because Max feels like a real person, she is sentimental and tries too hard because she is desperate to fit in but underneath it all is a fundamentally decent human being who wants to do her best. You don’t just grow to like her; you grow to feel protective of her. You want everything to be okay. On the flipside, Chloe is the exact opposite. A punk rocker who doesn’t give a shit. The two of them are however one part of a bigger whole, and they become intrinsically linked in your head.

Or at least they did for me. Because like most games in this vein you might feel completely different. You make the decisions and even though you can rewind time to make them several times, the right answer still isn’t immediately obvious. Sometimes a seemingly simple idea can have long lasting effects that you would never have predicted.

Life is Strange is full of problems. The graphics are dodgy, and the performance is at times awful. The actual gameplay – in particular, the puzzles which feel totally arbitrary – is often frustrating and its insistence on having collectables which draw you out of the story and leave you charging around areas looking for them is annoying. It also has an insistence on throwing ‘Easter Eggs’ in there which are so in your face that you might want to puke. However, it is one of the most powerful games I’ve ever played. Because of those characters and the way I grew to feel about them I don’t think I’ll ever forget it and that’s despite every single flaw.