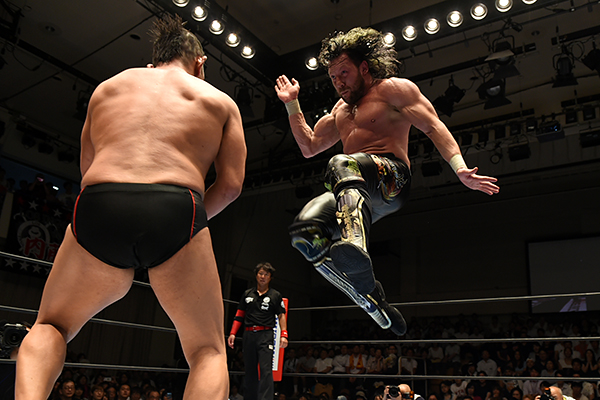 After a fantastic opening night of the G1 Climax from Block A, it was Block B’s turn to step up to the plate. It’s perhaps the weaker of the two, but there’s still a hell of a lot of talent on show, and once again New Japan had a card perfectly capable of delivering match of the year contenders. So let’s start dishing out those stars. 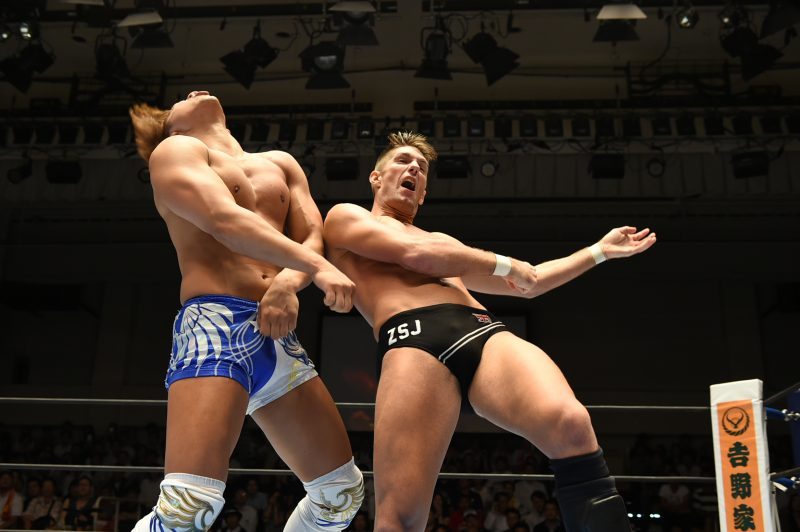 Who doesn’t want to see this match? Credit: NJPW

This should have been all about Zack Sabre vs. Kota Ibushi, and their interactions did bode well for their match, but Kawato (as he tends to do) stole the show. This guy has something special about him, as the fans already love him. His journey to pick up his first win is fascinating, and he’s got fantastic fire in the ring. When he finally pins someone, the crowd is going to explode, and a star will be born.Verdict: Three Stars 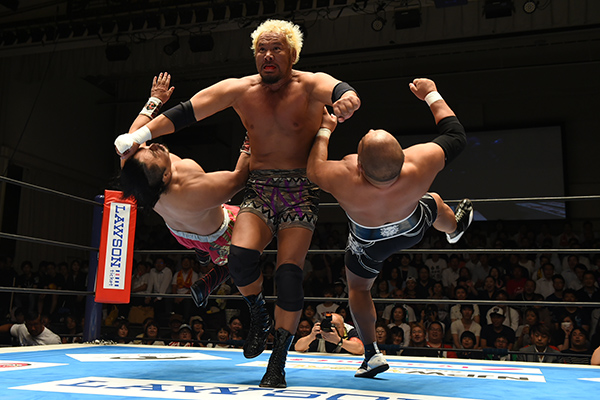 This match had four wrestlers who like hitting each other hard. Who doesn’t enjoy that? I do question the decision to tee off on each other like this in the undercard matches, but these four seem to be fired up by this tournament. I don’t think I’ve ever seen Makabe try this hard. This was another good tag match, and the only surprise was that the finish wasn’t a heavyweight pinning one of the two juniors. 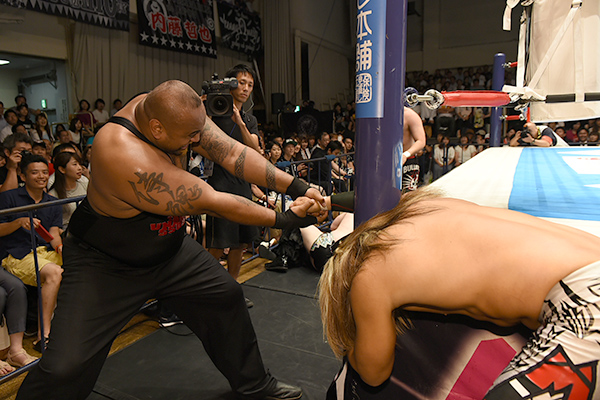 Maybe, take it easy on the arm? Credit: NJPW

If Tanahashi’s injury is half as bad as it is being made out to be, then I wish he would take it a bit easier on these shows. It looked like he was going to be involved in some light comedy in this match, but as it went on, he let Owens and Fale work over the arm and took bumps he just doesn’t need to be taking. That aside, this was fine and set up Tanahashi’s injury going into his match with Fale. Nothing you need to go out of your way to see but effective for those who did watch it. 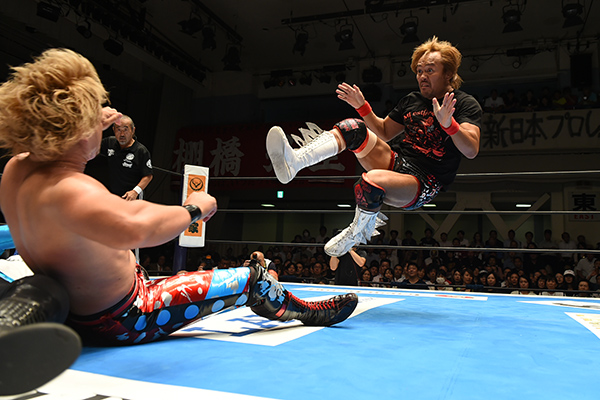 No caption can do justice to that face. Credit: NJPW

It feels like YOSHI-HASHI is adding a bit of edge to his game. He worked heel against Nagata and tonight he threw the sucker punch at Naito. Whether this is a long term thing or not remains to be seen, but so far I like it. When the two men set to face off were in the ring, this was entertaining, but quite frankly I could do without Jado. YOSHI-HASHI has impressed already in this tournament and him and Naito could be special. Another match that you don’t have to go out of your way to see, but it did the job.

Juice Robinson is having so many ‘biggest moment of his career’ matches this year that the phrase is becoming a cliche. This was another chance for Juice to step up and show what he can do and he did a brilliant job. It was worked at a slower pace than a lot of New Japan matches, but every move looked like it hurt. Kojima almost seemed to be testing Juice as he leant into those lariats and when he followed the one up to the back of the head with the brainbuster, it looked like it was all over. This is a huge tournament for Robinson, but if he can keep up this kind of quality, it will only see his star in New Japan continue to rise. Meanwhile, for anyone who hasn’t seen much of Kojima, this was a glimpse into just how good he can be. 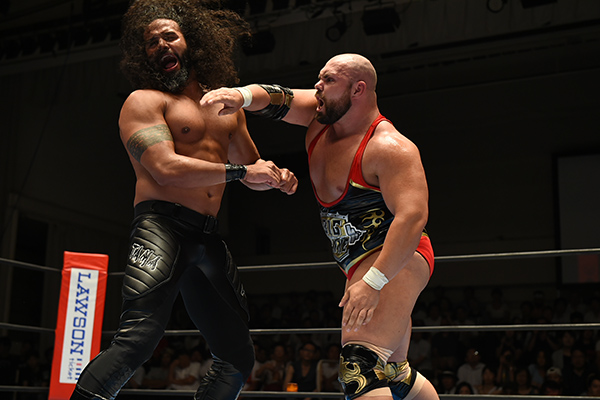 Tonga’s slippery eel act is cool. It helps him stand out because no one else is doing it. However, there’s still something missing from his game, and this match summed that up. When I wanted it to step up and truly deliver it didn’t. It had its moments, but it needed something, and that never came. It was all summed up by the finish which saw Tonga hit the Gun Stun off a Falcon Arrow out of the corner. It wasn’t obvious, at least on first viewing, that Tonga had even reversed the move and him suddenly popping up to get the pin was a real surprise. If that finish had been a little bit tighter, it could have been special, and the same can be said for this match.

Update: since writing this review I’ve gone back and rewatched the finish of this match. I was wrong. Tonga nails it and it looks great. I’m going to leave the review the same because I still think this match lacked something and on first viewing, the finish didn’t look great. However, I made a mistake and seeing the finish in a new light has made me appreciate it a bit more so I’ve bumped it up half a star. 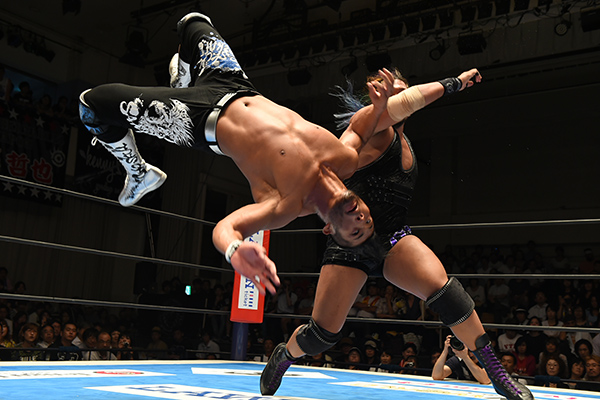 You’re probably wondering how I ended up here. Credit: NJPW

One day Evil is going to kill someone with a flying steel chair. This was a fight and damn did they both bring it. it. It felt like they’d decided backstage that they were going to give everything they’ve got despite their allegiances and it was a story which worked. The final third, in particular, was great with the two slipping out of each other’s signature moves. Sanada actually reminds of Naito in that he comes across lackadaisical at times, but when he turns it on, he really is good. This is also easily the best performance I’ve seen from Evil. In many ways, he’s a straight up brawler, but this match showed that he has a few more strings to his bow when presented with the right opponent. These men can go on to be stars, and this is the kind of match that will be pinpointed as a significant moment when they do. 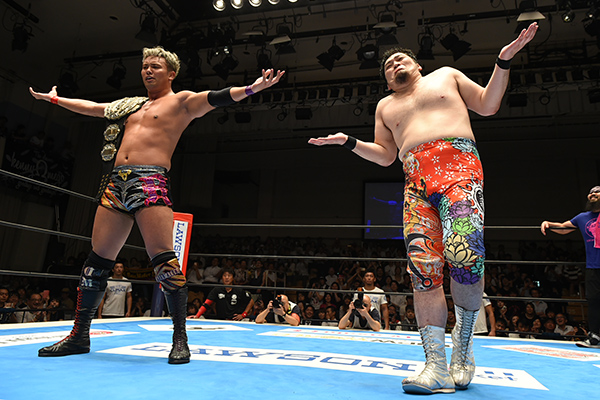 Okada looking bemused around Yano is one of the best things. Credit: NJPW

What you think of this entirely depends on what you think of Toru Yano. It was a farce, but it did what it had to do, and it gives Okada an easy night. There were a few cheap laughs and while it went longer than I expected it to, it wasn’t awful. It was worth it to see Okada’s always beautiful transition into the Red Ink. 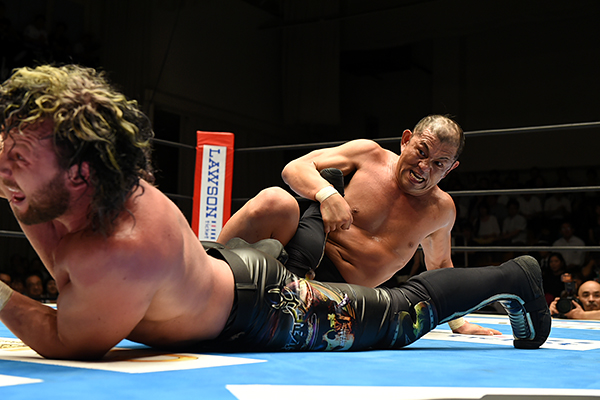 If you find someone who looks at you like this run away. Credit: NJPW

I was worried about this match for a while. It was building up nicely, and then the ref bump happened. All we can say is thank fuck for Bad Luck Fale. Him hitting the ring and clearing out Suzuki-gun was the best thing that could have happened as it allowed these two masters to get to work. Omega sold that leg like a champ and Suzuki was his usual terrifying self the vindictive motherfucker that he is. The V-Trigger is the best-looking move in the world right now, and even the botched reverse ‘rana at the end wasn’t enough to hurt this match. This is the first time we’ve got to see Suzuki have a proper fight (or at least two-thirds of a proper fight) since his battle with Okada and it was a nice reminder that he can still go. Meanwhile, Omega is right up there with Okada for the best wrestler in the world right now, and this was further proof that he can do it all.

Verdict: Four Stars (Half A Star Knocked Off For Shenanigans) 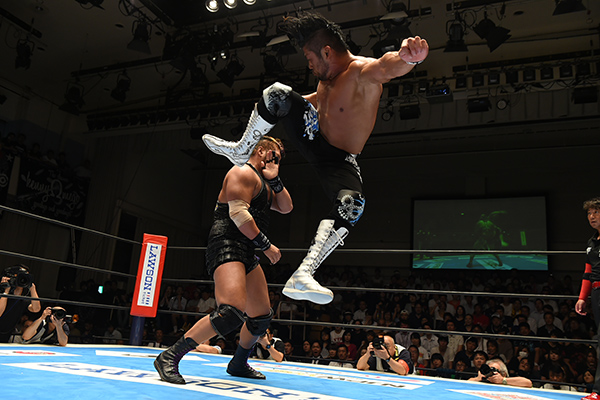 Match of the night? Credit: NJPW

This wasn’t quite as good as the first night, but it was still one hell of a show. Even the undercard came up with a couple of good tag matches. Omega vs. Suzuki is the one that everyone will be talking about but Sanada and Evil were right up there with them, and I don’t think I’d argue with anyone who said it was better. This G1 is shaping up to be something extraordinary, and the only worry is that these guys are going so hard that they’ll all be broken by the time we get to the end.