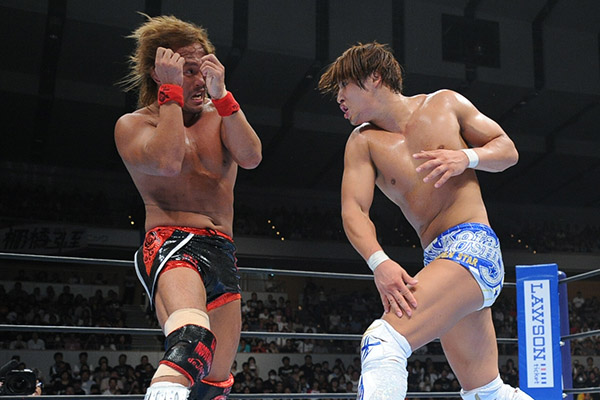 It’s beginning to look a lot like G1… Yup, it’s that time of the year, folks. If you are into the puro, wrestling is about to take over your life. Whether you’re planning on watching every second (no cheating, that includes the undercard) or dipping in and out when you hear Ishii has done something amazing or Okada went and did Okada stuff again, it’s hard not to be excited for what’s to come. If for some reason you weren’t, then I can’t imagine that apathy extended past night one. New Japan did what New Japan does and put on one hell of a show. Here is that, but in a lot more words.

This was standard New Japan opening match fare, and it was more a question of who would pin Finlay rather than who was going to win. Robinson and Kojima face-off on Thursday and Kojima got a few shots in early with those vicious machine gun chops. I also thought Finlay looked pretty decent here, they either need to give him something to do or send him out on an excursion. The longer he spins his wheels, the less chance there is of him ever being a big deal. 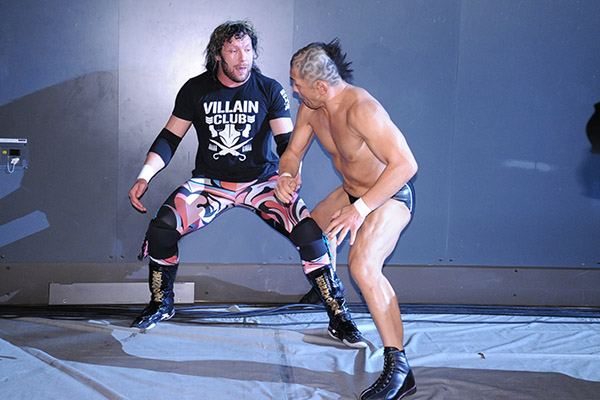 It’s around this point that sensible people run away. Credit: NJPW

The second Kenny struts down the ramp in those multi-coloured tights you know what you’re getting. In this instance, who can blame him? This roster has a hell of a lot of shows coming up, and when they don’t need to work hard, they should be taking it easy. The only thing worth talking about in this match was Omega and Suzuki’s interactions, and they bode well for Thursday. The worry is that some of these other scrubs make an appearance during said match and prevent us getting those two doing what they do best. 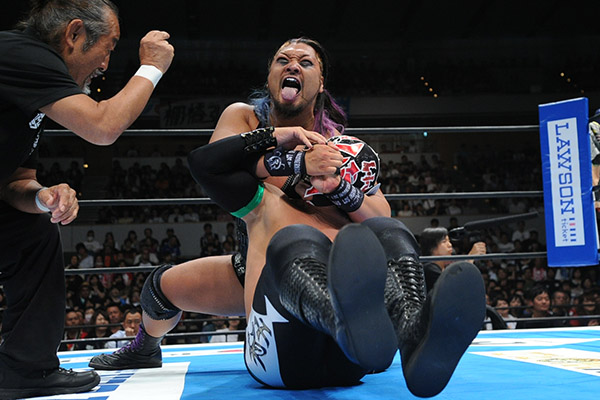 Fittingly, he’s a bit of an evil bastard. Credit: NJPW

Factions implode. No one does undercard tag matches better than LIJ so how good should LIJ vs. LIJ be? Sanada set the tone by going for the Cold Skull straight away, and it turned into a hard-hitting brawl with EVIL, in particular, looking great. I think the outcome of Sanada vs. EVIL is one of the more interesting ones on Thursday. It could set up which member of LIJ is getting the most attention in the next few months and continue the tiny cracks we saw develop here in New Japan’s coolest of gangs. 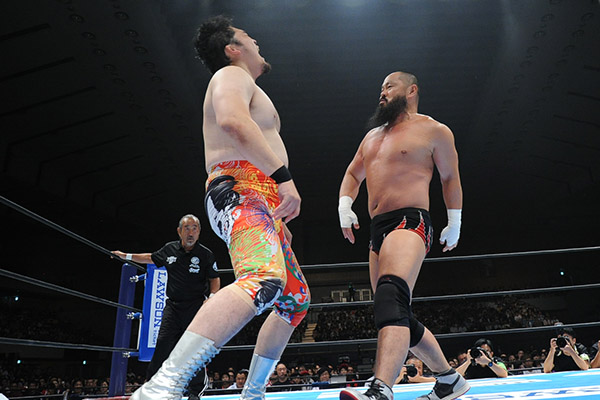 It’s safe to say no one was taking this particularly seriously. Credit: NJPW

If Omega was taking it easy, then these guys barely turned up. The best part of this match was Okada struggling to hide his amusement at the whole thing. This was what it was and what it was, was a comedy match revolving around Yano’s antics and the fact Okada is coming off a gruelling seven months and needs as many breaks as he can get. The Yano vs. Okada match on Thursday will go one of two ways. One, Yano gets his head removed by a Rainmaker, or two, low blow followed by a roll-up. Two is not as unlikely as some may think. 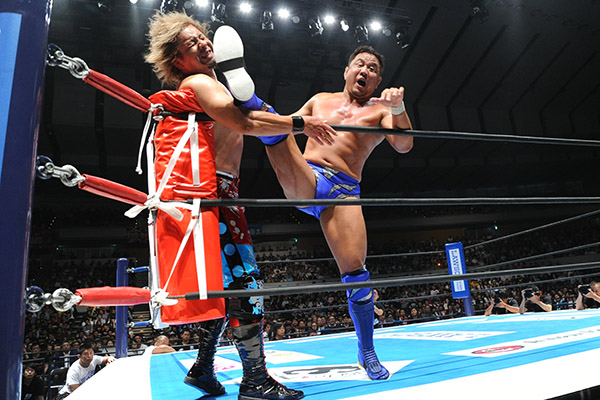 Business is picking up. As a relative newcomer to New Japan what makes the G1 exciting is the chance to see the likes of Nagata in singles matches. Let’s see what the old bastard has got. Well, in this match, it was a lot. This was fantastic. YOSHI went out there and gave the veteran a lot, slipping into a heel role and letting Nagata kick him senseless. However, this was not a young star carrying an old guy, Nagata was just as important. The submission sequence was a stand out on a night with a lot of outstanding matches. Nagata might be following in Tenzan and Liger’s footsteps by not picking up many wins in his final tournament, but if the match quality is this good, he’ll go out on a high anyway. 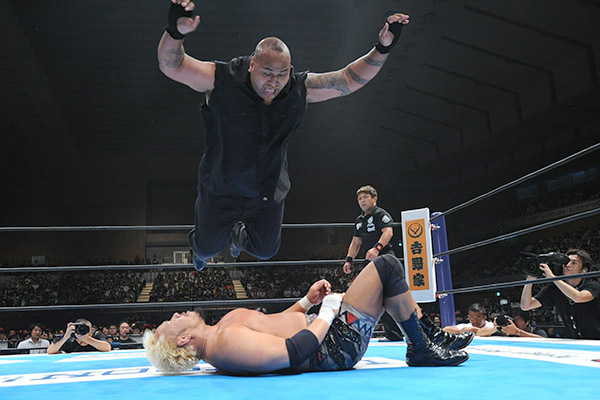 This was a match between a wrestler who is going to eat a lot of pinfalls and one who can dish them out to help with the scoring. Fale is always a threat, and you can have him beat anyone without hurting them too much. Plus he tends to burst through the expectations set for his matches. Even this wasn’t an awful fight. Sure, Makabe was nowhere near connecting with the King Kong Knee Drop at the end but Fale knocking him out of the air was still a cool visual. On a fantastic first night, no one will remember this, but it did what it had to do. 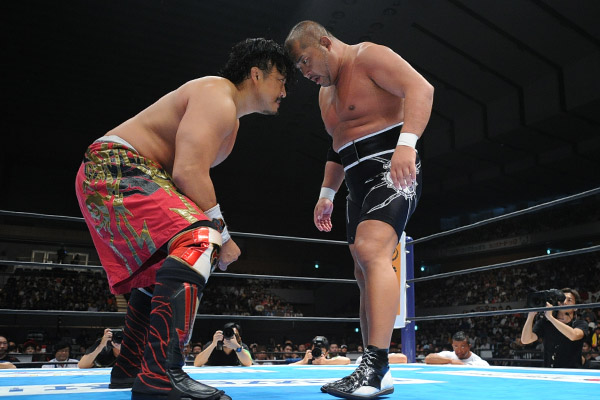 With Shibata sadly gone from New Japan due to his horrifying injuries, it falls to Goto and Ishii to provide us with the proper wars in this year’s G1. And damn, was this war. It was at times sloppy as the two of them worked at a pace that guys with their build should not be able to do but it didn’t stop this being everything I want from these two’s matches. By which I mean they smacked each other really hard. Goto has struggled a bit in the last few months, but this was a reminder that when you put him in the ring with a great opponent (and Ishii is one of the best), he will deliver. 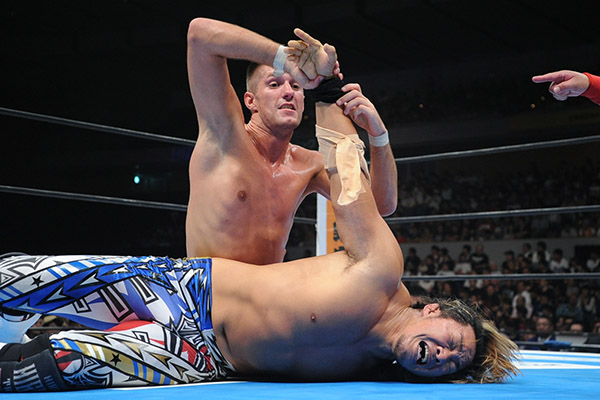 Scream for me Ace! Credit: NJPW

This is the match I’ve wanted from ZSJ ever since he stepped foot in Japan. No one works that slow technical style where he dissects an opponents limb better than Zack and the second Tanahashi came out in that black sleeve you could see where this was heading. El Desperado’s interference towards the end was a bit of a shitter, as it stops this win being entirely clean, but on the scale of Suzuki-gun antics, it was low down the chart. You can’t help but love these men and watching them put on a technical master class was pure joy. 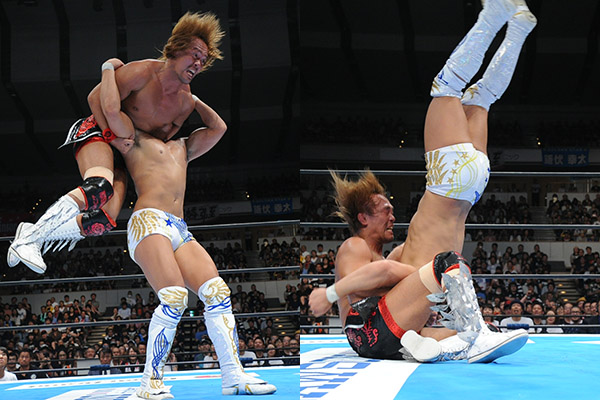 Few men lay a match out better than Naito. There’s always a point about half way through where you worry it isn’t clicking. It feels too slow, too dull. Then it stops being dull. In this match, it was when Kota Ibushi kicked him so hard in the chest I’m pretty sure I felt it. What can we say about this? It was incredible, and the only real criticism you can give it is that these two really shouldn’t be trying to kill each other on the first night. The piledriver from the second rope, the German over the ropes and those two Destinos which might be the best I’ve ever seen. This was a vicious, hard-hitting and ridiculously exciting professional wrestling bout and it closed out the first night of the G1 in style. 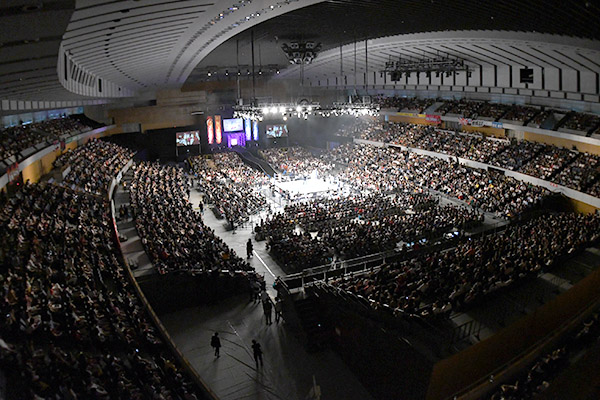 Ready for some graps. Credit: NJPW

You all know this was a fantastic show so I won’t bother repeating it here. Instead, I’ll round-up some other points.

Kevin Kelly stood up and did a good job calling the main event by himself after Don Callis lost his voice. The emphasis being put on his shoulders forced him to emote a bit more, and I’d like to see him do that when working a two-man booth.

New Japan’s production continues to be superb. People always praise WWE (rightly) for their video packages, but the in-ring camera work in NJPW is second to none.

I am excited for the rest of this tournament.