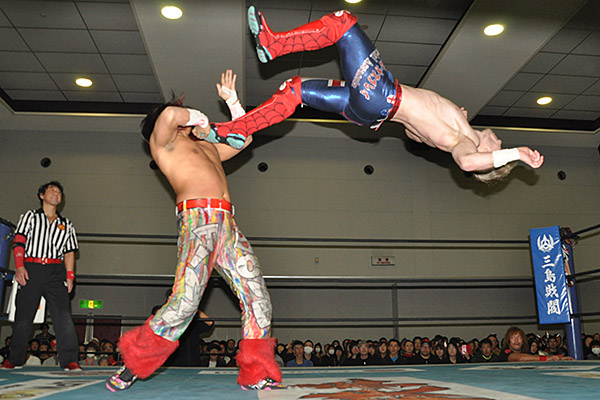 B Block may have been the saviour of this year’s World Tag League, but I shan’t pretend I’m sad to say goodbye. This has been a long old tournament, and the quicker it’s done, the better. Christ, what a grump. Let’s dish out some stars. 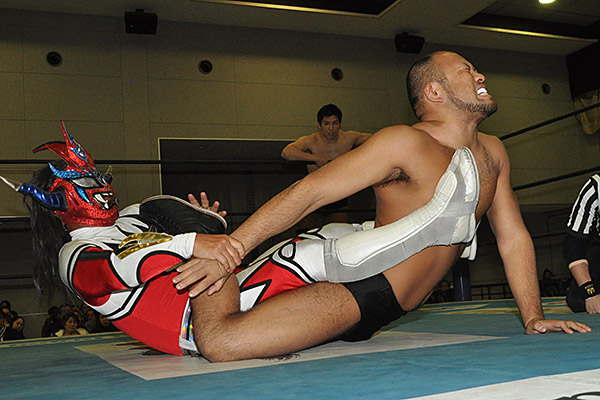 The Young Lions got to mix it up with a Thunder God. How cool is that? You’re in the ring with Jushin Liger. I hope the wee cubs appreciated it.

This was a decent enough opener. Yagi and Narita don’t leap off the screen yet but, judging by this, they seem to have the fundamentals down. With their peers getting put in higher profile situations they’ll hopefully get a chance to flourish in openers like this one.

The big surprise was that not only did Liger not get the win, he was on the losing side. In fact, he became a bit irrelevant at the end of the match. Instead, the man who looks closer to 56 than 26, Oka, picked up a victory. That’s got to be a vote of confidence for him. 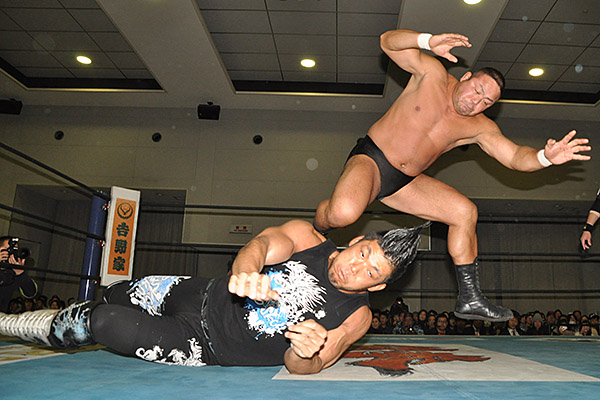 Kawato is unlikely to ever headline the Dome. However, that kid is still a star. The way he stood up to Evil was fantastic. It doesn’t matter how hard he gets beat down, that fiery passion keeps him going. It’s the kind of charisma that most wrestlers would kill for.

This was what it was. It gave LIJ a win going into the finals and was a run out for Kawato. We even got the always amusing Nakanishi hot tag which has as much spice as a Chicken Tikka Masala. Still, it was a fun enough watch while it was on. 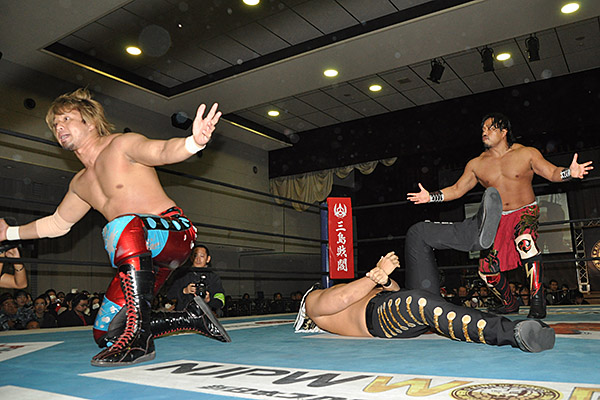 This spot is cheesy as hell. Credit: NJPW

This built up to Suzuki and Goto by having Suzuki drag him into the crowd and throw a barrier and some chairs at him. I don’t think I’ve ever seen him do that before.

You know what makes this shit worse? The touches we get of the real Suzuki are still great. I’d rather see him do a five-minute match restricted to the ring than eleven-minutes with all the crap. It’s got to the point where I instantly zone out, and that’s sad.

Thankfully, we did get a touch of straight-up Suzuki and Goto. If they stick to that at the Dome, it could be great. I wish I were confident that would happen. 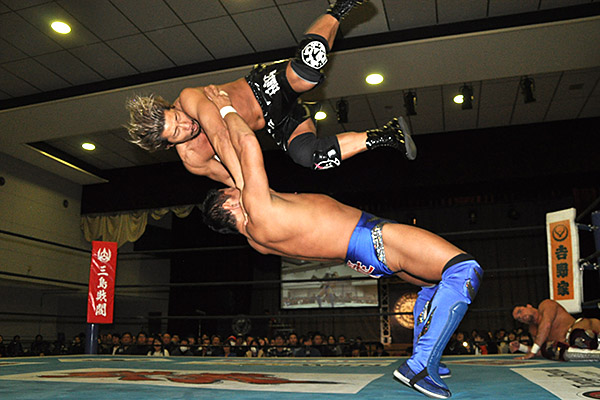 I know I’m always banging on about Chase Owens, but he continues to be the highlight of these mid-card tags. His shtick where he nicks other people’s signature spots is so simple and yet never fails to get heat. In a match like this, that bit of heat makes all the difference.

That’s about all the analysis I can do. It was perfectly fine. 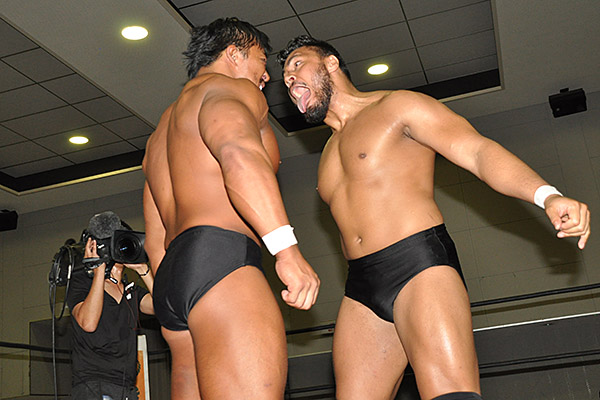 This was the battle to decide which team finished with zero points.

Henare and Young Kit teeing off on each other stole the show in a short encounter. Both of them can be proud of how they’ve portrayed themselves in this tournament. Kitamura is slowly improving while Henare seemed to find his stride again after his long spell out.

This wasn’t long enough to be a great match, but it was an acceptable way for both teams to finish the tournament. 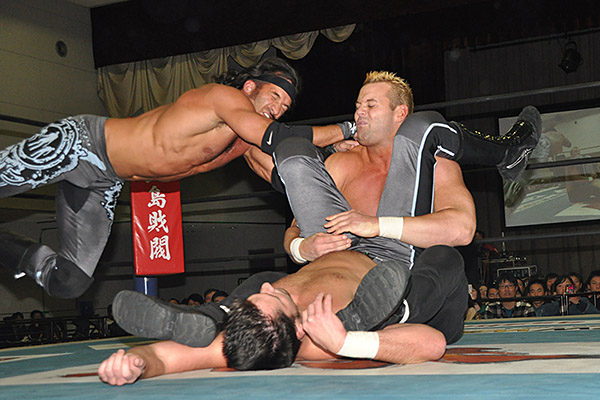 Chuck Taylor and New Japan don’t perhaps go together like bread and butter. However, I hope he gets invited back. Best Friends have been my MVPs and having Chuckie T about can never be a bad thing.

Here they went up against shouty man Lance Archer and his dull mate Dave. KES are a limited tag team and you kind of have to play their game to get a decent match out of them. Thankfully, that’s something that Dustin and Greg do well. Beretta is one of the best sellers in the game at the moment, and he made the tag champs look great as he flopped around the ring.

This was good. There were a couple of moments where it felt like Best Friends might be about to sneak out with a victory, but in the end, KES were just too big and too mean.

For some reason, there are no pictures of this match. Sorry about that.

I feel sorry for good boys Jeff, Hanson and Ray. It must be tough having to share the ring with a literal piece of shit.

Was I imagining things or was there was a bit of spice to War Machine’s interactions with the said piece of shit. It’s entirely possible I’m projecting here but Rowe, in particular, seems to have made his feelings about Elgin clear and he appeared to relish dishing out some of those strikes. Plus, he got his new catchphrase in at the end. Fuck Michael Elgin indeed.

This was a good hoss showdown. These guys know what they’re doing out there, and while I’m sure on a bigger stage it would be even better, they did more than enough to keep me happy. It was a lot of beefy men chucking each other about and hitting each other hard. Who doesn’t love that? 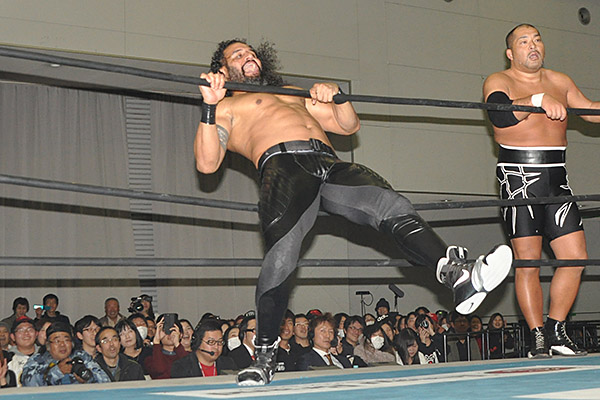 If you want proof that Ishii is the boy, then watch him have a decent sequence with Tonga Loa. Loa is a passable tag wrestler who often gets lost. With Ishii, he looked a million bucks.

I also have to admit to having a weakness for Yano and Tama facing off. Yano does a better job of putting over the slippery eel style of Tama than the man himself. His confusion at him not being where he expects him to be, always make me laugh.

This was a Guerrillas of Destiny match which means that it had a ceiling. However, it was also a Tomohiro Ishii match which means that you expect a certain degree of excellence. All of that evened itself out into something pretty decent. I wouldn’t go out of your way to watch it, but I doubt it will offend you. 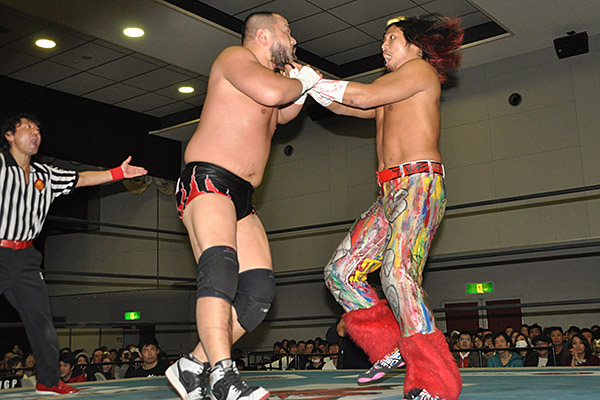 If anything sums up World Tag League, it’s the fact that it’s not even the main event on this show. We’re getting the same six man that we had the day before instead.

I could basically copy and paste my review from that show. While it wasn’t identical the structure was the same. Although, Will did admit that he was hungover, hence his limited involvement in the action. Naughty boy. In saying that, I’m hungover as I write this and I can barely move, nevermind do some flips. So I’m willing to let him off. I’m gracious like that.

Despite having seen this before, there was enough talent in that ring that it was never going to be bad. That still doesn’t mean you have to go out of your way to see it. 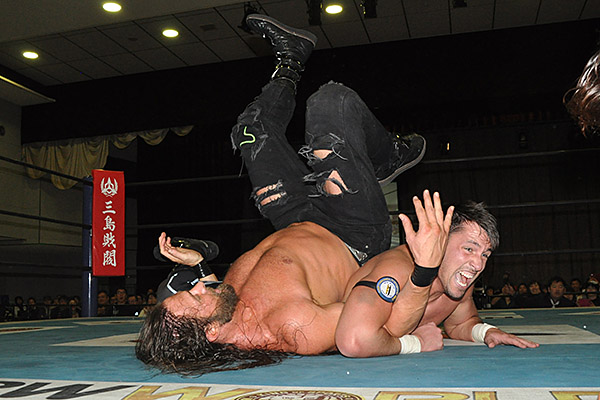 Wow, we’re nearly done. Just the finals left and then I won’t have to review another World Tag League show until this time next year. I’ll be able to go outside. I mean I won’t, I’ll probably catch up on all the other wrestling I’ve missed, it’s nice to pretend though. As Tag League shows go, this was a good one. Which means you should watch it if you have nothing better to do.