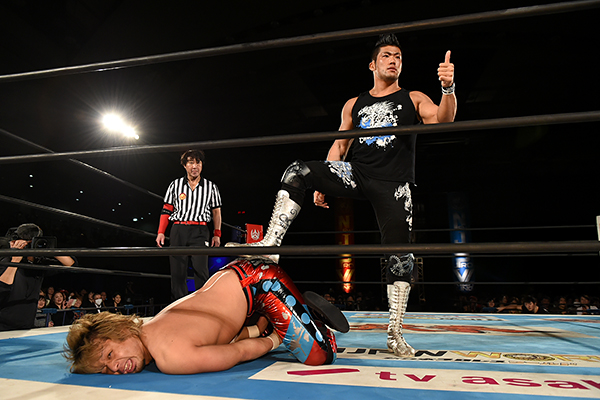 It’s the last night of A Block and I might cry happy tears. We are getting ever closer to this tournament being over. Let’s dish out some stars. 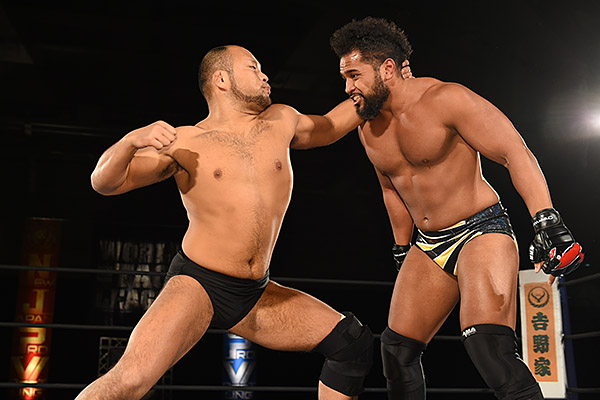 It’s Haku’s lads vs Finlay and his wee pals.

Young Kit (I’m sticking with that nickname) came off the top rope with an axe handle early in this, which he followed up with a celebration. That’s the kind of enthusiasm I can get behind.

Leo Tonga was exposed here. He seems to be getting better, but when you put him in the ring with Kitamura and Oka, you realise it’s not enough. He can’t wrestle like Oka and, despite his size, he doesn’t have the presence of Kitamura.

This was acceptable, right up until Tanga Loa hit an atrocious Apeshit for the win. It looked awful. 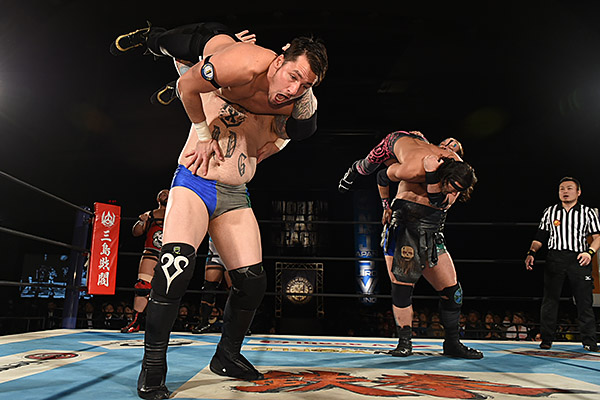 It must be fun being War Machine. Credit: NJPW

I know that Ray Rowe was at least slightly in character when he said it, but I think we can all agree with his new catchphrase. Fuck Michael Elgin.

That piece of shit aside, this was a match filled with wrestlers that I like. They did the greatest hits set, and it was an enjoyable one. 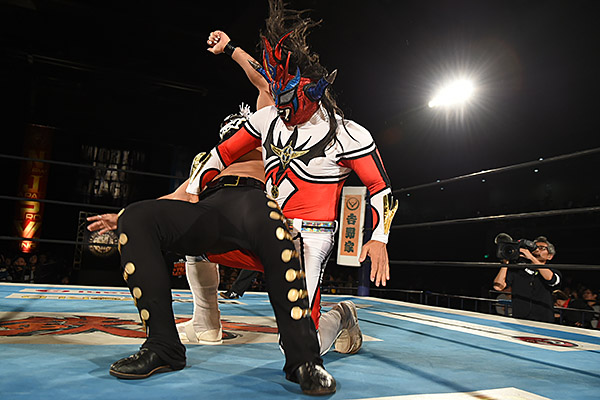 I know it hasn’t been that long since we saw Liger, but it’s always good to catch up with the Thunder God. The crowd certainly seemed to think so. Sadly, he returned to face Suzuki-gun which meant a lot of people ripping at his mask.

This was another standard multi-man tag match. Everyone got a little bit of action and, in doing so, made sure that no one got enough to stand out. 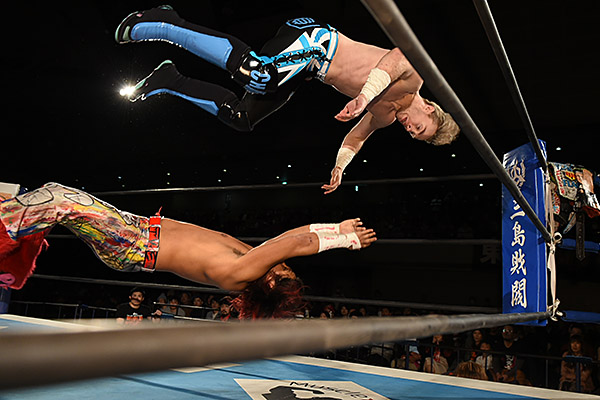 We can fly! Credit: NJPW

This match (or a variation of it) has headlined nearly every show on the tour. Which means that by this point, they’ve got it finely tuned. Will and Hiromu do some ridiculous shit, Okada and Naito mostly ignore the action to beat the crap out of each other and Bushi and Gedo fills in the gaps.

And I don’t mean to sound dismissive of that because most of these men are incredible. It does just feel a bit like they’re going through the motions. It’s not being phoned it in and yet it’s almost muscle memory. They can do it without thinking. Of course, their muscle memory is a hell of a lot better than most people’s best.

The one surprise is that rather than Bushi or Gedo being involved in the finish, we saw Ospreay pin Takahashi clean after chaos broke out in the ring. It’s probably not a big deal in the grand scheme of things, but in a company that protects wrestlers the way New Japan does, it was a surprise. 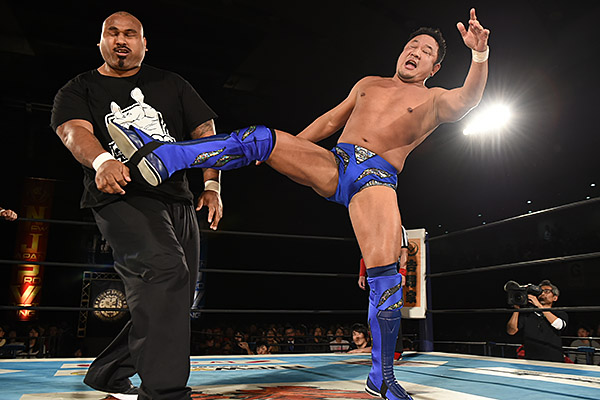 If you’ve ever wondered what wrestling would look like if it was done in a bog, check out Fale and Nakanishi’s interactions here. It was only the audio that kept me from thinking I’d accidentally put it into half speed.

That aside (and, to be honest, what do you expect from a fifty-year-old man and a giant like Fale) there isn’t much to write home about with this one. They were playing for pride and no-one was busting their ass.

Proceedings weren’t helped by a crowd that didn’t seem to care. Even Owens stealing a few of Nagata’s signature poses didn’t get a reaction. Still, it’s a nice win for the veterans to finish off the tournament.

Verdict: Two And A Half A Stars 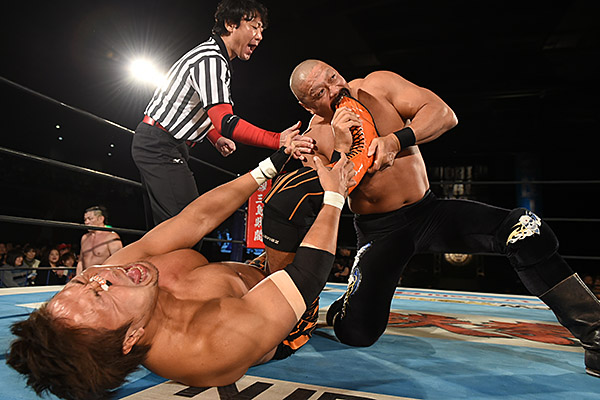 There was a moment early on where I was hopeful. Suzuki and Kojima were in the ring, exchanging strikes and it looked like we might be on course for a touch of magic from the two legends.

Two minutes later Iizuka was hitting Kojima with a chair right in front of the ref and I realised I was a fool. They weren’t going to do a proper match, it was always going to be pure garbage.

I’m not wasting any more time writing about this.

Hangman Page doesn’t get enough credit for how cool that Shooting Star Press he does off the apron is. He very rarely mucks that up.

This was another mediocre outing. Although a better level of mediocre than some of the others. Sadly, I’m over Sami Callihan. Both as a wrestler and as a person. I don’t want him in New Japan and I don’t want him with Juice. It doesn’t work.

Ultimately, this felt lifeless. Page and Yujiro could have still won the group if they’d won here and Goto and YOSHI had taken the main-event, but no-one was acting like that was possible. Everyone in the arena knew this was coming down to the last match. 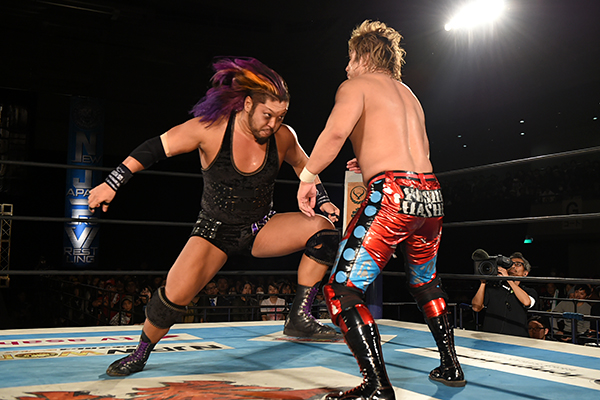 In a tournament defined by its disappointments, these two teams have perhaps been my biggest let downs. The problem with being as talented as they are is that more is expected from you, and they haven’t delivered.

Until this match that is. They went all out to deliver an epic encounter. We got hard-hitting action, finisher kick outs and for the first time, I believed people wanted to win this thing.

In the end, LIJ picked up that win and with Goto set for Suzuki (I assume they’ll have some kind of confrontation at the final), that makes sense. However, it does seem to telegraph B Blocks winner as being the team that will go over. It’s easy to forget, but Sanada and Evil already have some belts they need to defend. 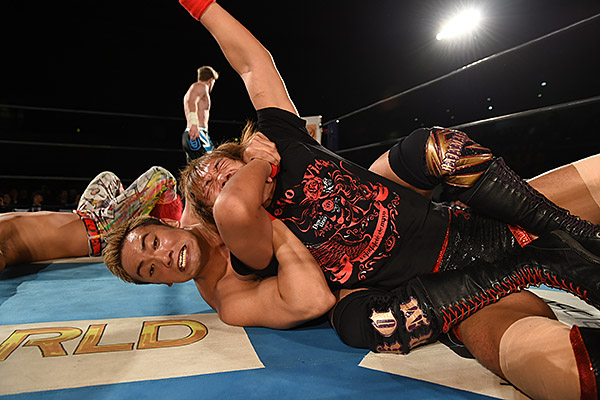 Okada is trying out something new. Credit: NJPW

This was a one match show. Parts of the undercard were fun enough, but there’s nothing that you need to see, while the Tag League matches that aren’t the main event are incredibly skippable. It seems fitting that A Block finishes things off with a lot of mediocrity. That is what they’ve been doing best.