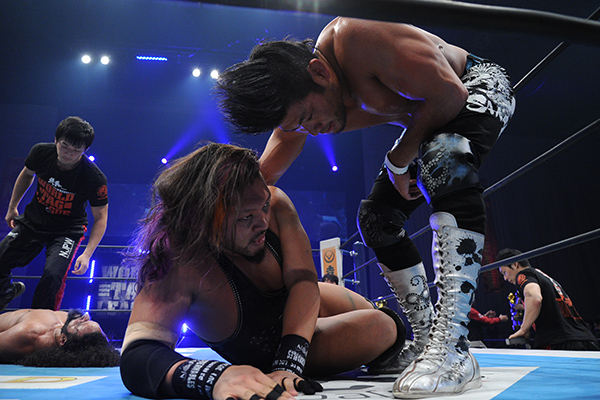 We’ve made it! Nineteen shows later, and World Tag League is over. I reviewed every single one of those bastards. And, for a peek behind the curtain, there ain’t multiple people doing this. It’s all me. God, I need a life.

Self-loathing aside, this is actually a good card and is essentially our Wrestle Kingdom go-home show. That alone is enough to make it worth a watch. Let’s dish out some stars. 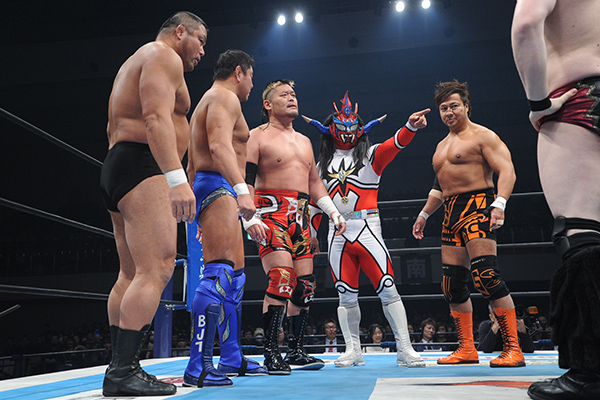 There’s a lot of experience on that team. Credit: NJPW

This match served two purposes. It gave the little cubs a runout and it let the crowd catch-up with the legends. No one is going to remember it in a week or even a few hours, but those in attendance will have had a lovely time. 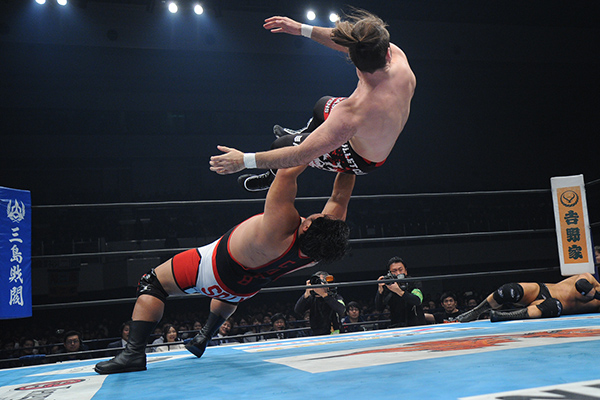 All together now, fuck Michael Elgin.

I was never going to hate this. It had Big Jeff suplexing people, the good lads that are War Machine and my personal favourite Chase Owens (who apparently thinks he’s Tongan now? I guess he’s got to keep himself amused). At one point lovely Jeff started hitting suplexes on Chase and I was getting all sorts of funny feelings.

The only other interesting point was the commentary team putting over Leo Tonga. Kelly and Callis don’t do that stuff for the fun of it, and it suggests New Japan have plans for the newest son of Haku. 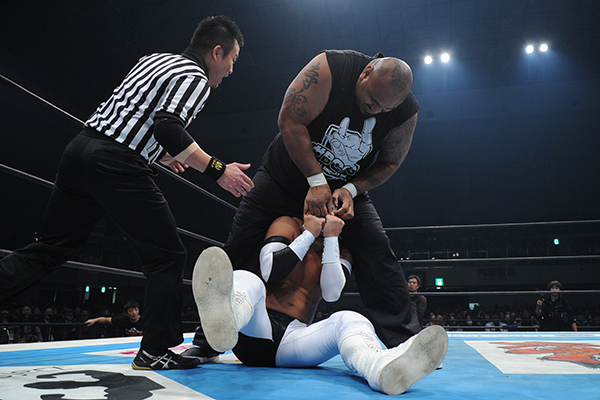 What a weird match. It started fine as Bushi dodged around Fale catching him with any licks that he could. Then, Fale got control of things and we got a few minutes of boredom before Bushi sprayed the mist, hit a low blow and got disqualified.

I’m not entirely sure what this achieved? I assume we’re getting Bullet Club’s B team going for the trio’s titles. Why this is the route we’re taking, I don’t know. 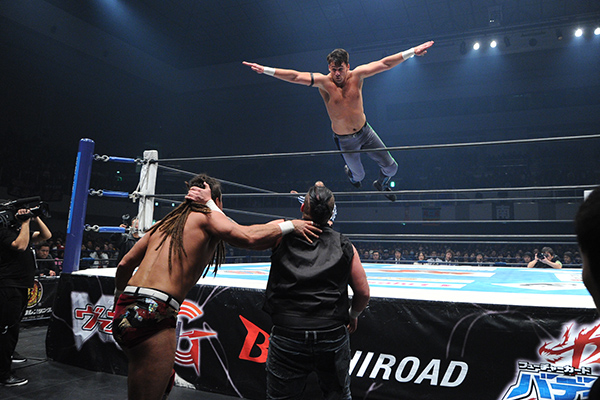 I wouldn’t be surprised if this is the last time we see Death Juice (still a stupid name) in New Japan. Maybe it’s wishful thinking on my part, I just can’t see Callihan hanging around. I’d be more than happy for Taylor to do so, though.

All that said, this was a fun match. Best Friends were my highlight of the tournament and they stood out again. I love the way they integrate the silly parts of the act with the wrestling. They do comedy and yet it never restricts their in-ring work. It feels more like it’s their personalities shining through than their gimmicks.

In the end, they’d pick up the win with a Strong Zero and put to an end what was a strong tournament for them. With there being no obvious spot for Beretta on the card as a single wrestler at the moment, having them chase the tag titles in the future would be fine by me. 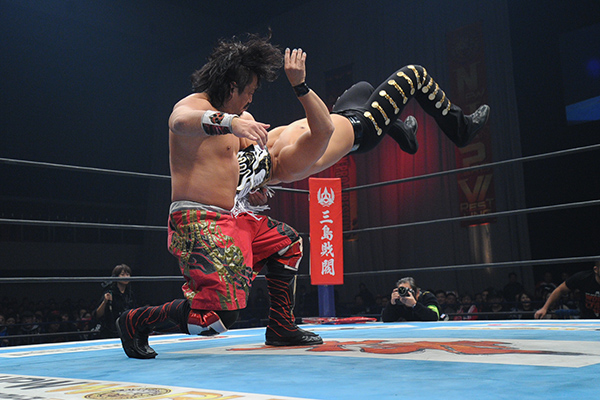 Those flowing locks will be on the line. Credit: NJPW

There was a good chance this match would be more about Suzuki throwing railings at Goto than it would be about wrestling.

Thankfully, we did get some in-ring action too. It was nothing special, but there was a touch of Ishii, and that’s never a bad thing. We also got a bit of serious stuff from Suzuki and Goto and they continue to show that a straight up match could be special. I’m just worried that’s not what we’re going to get.

A worry that wasn’t quieted by the announcement that Goto and Suzuki will be a hair vs title match. I’m really not sure how I feel about that one.

Anyway, this was fine. Much better than most Suzuki-gun matches. 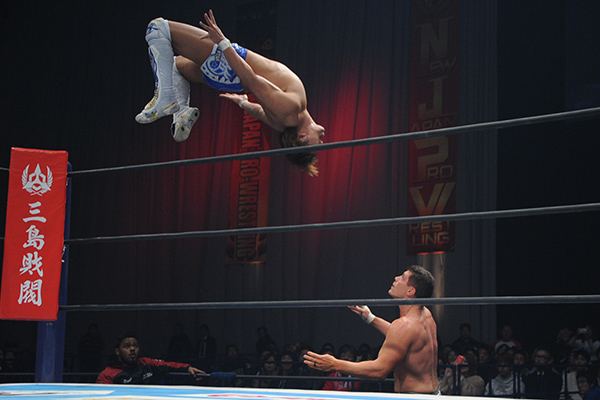 Why does NJPW fly Cody over for these shows? He was in the UK this weekend, so it can’t have been a cheap flight. If he were insanely over, I’d get it, but he’s not.

Whatever their reason, they used this match to set-up the Dome. Ibushi vs Cody and Marty vs KUSHIDA. From that point of view, it did a good job. Three of these guys are capable of being great, and even Cody knows how to tell a story. He used Ibushi’s willingness to destroy his own neck to his advantage with that Cross Rhodes on the ramp which might actually get him a bit of heat.

Back in the ring, Scurll did some villainous stuff and picked up the win. The action here was solid, yet it was second to the progression of these men’s stories which at this stage is more important. 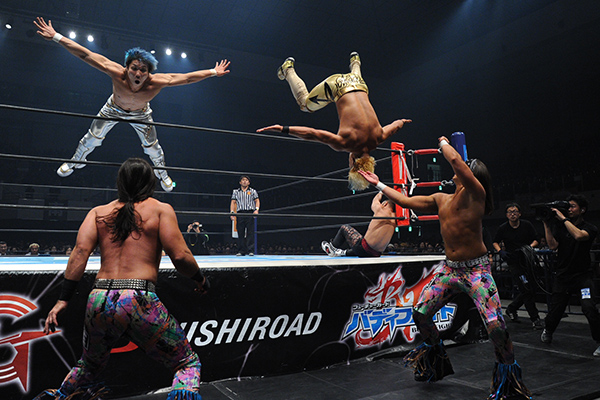 Beating the Bucks at their own game. Credit: NJPW

I could talk about this match, but let’s be honest, that’s not the story here. It was decent enough and we all had a bit of fun. It was a wee amuse bouche before the real action.

Because the talking point here is the post-match angle, which was great. Jericho popped up on the big screen to hype their match a bit more and then suddenly he was in the arena. The subsequent beatdown of Omega, the ref and even Don Callis was brutal. Jericho firmly established himself as a heel and turned this from an exhibition match into a blood feud. It was fantastic stuff.

There was another aspect to this attack. It gives Omega and Jericho the fuel to have a war at Wrestle Kingdom. A war that will help to hide any weaknesses that Jericho has in the ring. It will be a different type of match to what we’ve seen from Omega recently. Would you bet against him pulling it off? 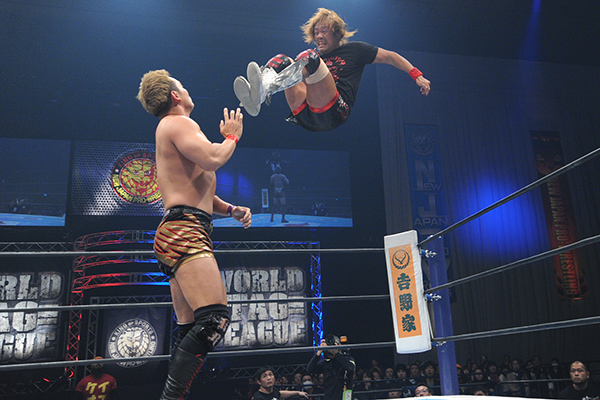 This is the culmination of the numerous main events these four men have had across the tour. On the whole, Okada has got the best of these matches and has added a Cobra Clutch style move to his repertoire.

We’ve seen this a lot recently and it always delivers. However, once again there was more interest in the story around the match than the match itself. It is insane how over Naito is (and Okada isn’t exactly struggling). That man is going into this show hot, and I don’t care if the West cares more about Jericho and Omega, that show is all about that match. Their post-match interaction showed that Okada has Naito scouted and kept that good streak going for the champ.

Elsewhere, Hiromu got his victory back over Ospreay. It’s interesting to note that Daryl and the more cooky elements of his character have been cut back. As much as I enjoyed that stuff, I’m glad. I want Ticking Timebomb Takahashi to go and bring that belt home.

This was another decent match that was overshadowed by the angles. 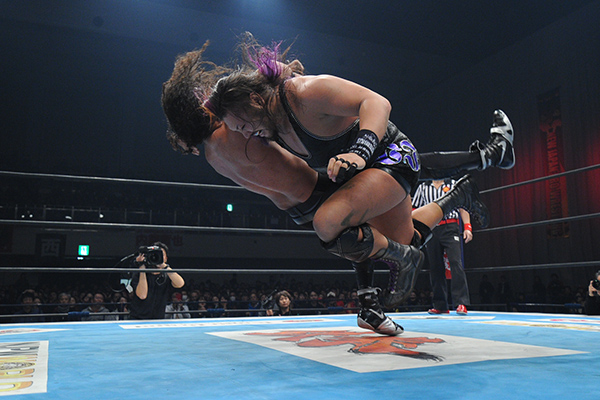 I’m still not convinced we’re getting a straight-up match at Wrestle Kingdom. I’m waiting for Gedo to pull the switcheroo on us and I won’t believe he’s not until we get to show day. Perhaps even until the bell rings.

In the here and now, though. I’m delighted to see LIJ get the win. It’s a fresh match-up and I think they could have a decent showing with KES. With Bushi and Fale both getting involved here, it wouldn’t be too hard to hand the trios titles over to the Bullet Club B-team before the day so they can be defended also.

The match itself was pretty mediocre which is par for the course with GOD. I more and more feel like they aren’t very good which is a shame because I want to like them. Tama Tonga, in particular, has a presence and I’m a fan of a lot of his parts. Just not the finished product.

Once the shenanigans were over, we did get a decent closing stretch. Evil went pure babyface as he survived GOD’s attacks and Sanada’s return to make the save got a positive reaction. We then got Tonga refusing to stay down as Evil and Sanada beat the crap out of him. It wasn’t enough to save this, but it was at least decent. 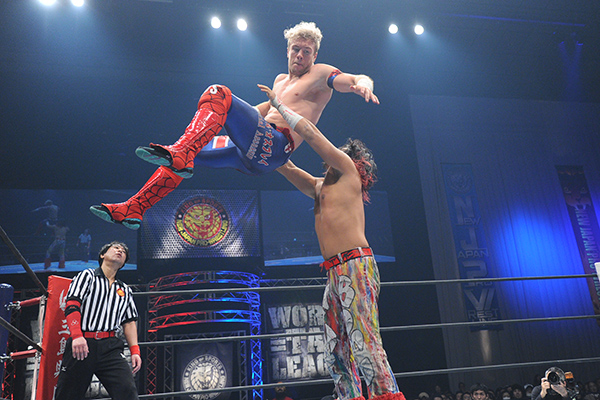 Pictures of these two always look a bit like magic. Credit: NJPW

This wasn’t a great wrestling show. It was, however, an interesting one. New Japan pushed a lot of stories forward and while that was detrimental to the in-ring work, it was a huge deal for the Tokyo Dome. They’ve set out their path and now it’s just a matter of passing the days until we get there. Don’t be sad, though, World Tag League is finally over, and that can only be a good thing.