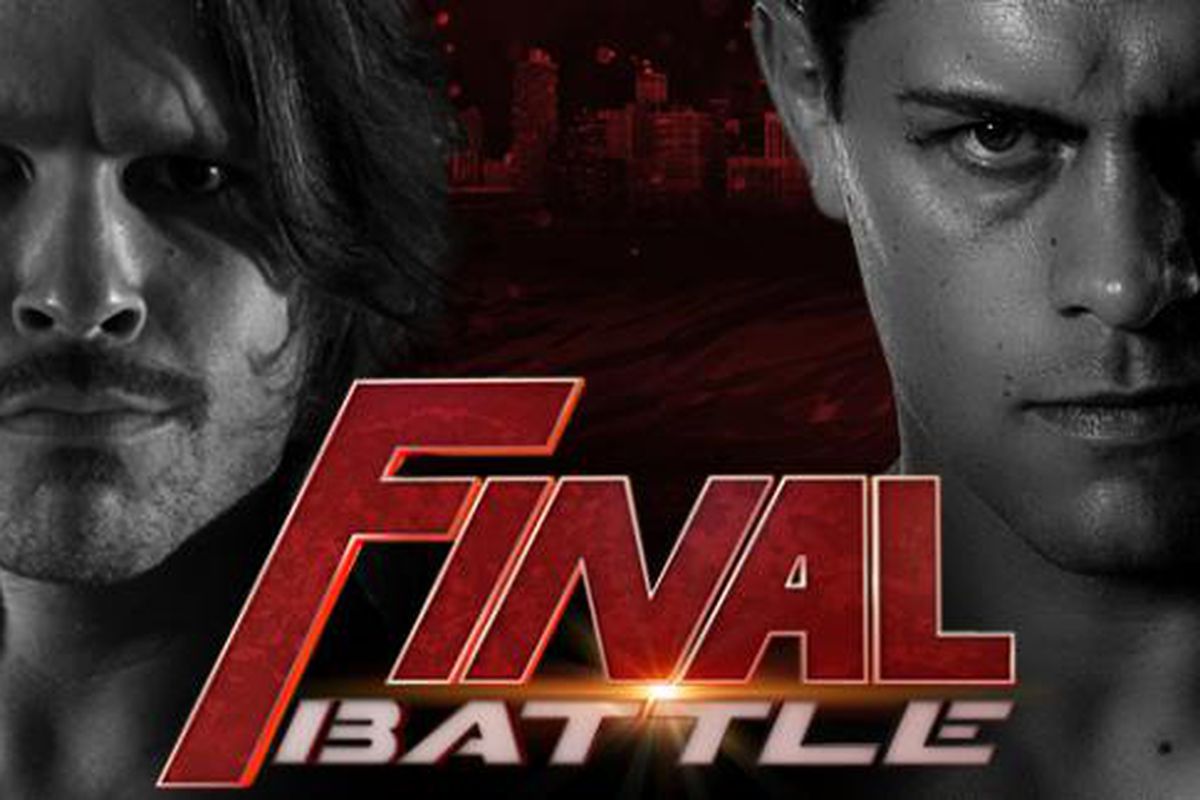 Dalton is going for gold.

As we prepare to say goodbye to 2017, Ring of Honor is in a weird place. Inside the wrestling bubble, it feels like no one cares. This show had no hype and few people bother with the weekly television. However, business is up. It’s a weird conundrum that suggests us wrestling diehards don’t always know what we’re talking about. Let’s dish out some stars.

Imagine having access to Will Ospreay and deciding the best way to use him was a random match with Matt Taven? No offence to Taven (although, let’s be honest, a little bit of offence), but surely you can do better than that? Maybe ROH is as dumb as Colt Cabana suggested Ospreay is.

That dumbness played a part here, as Will Ospreay kept getting distracted by Taven’s Kingdom buddies running around on the outside of the ring. Although considering one of them swung an axe at him, maybe it wasn’t that dumb. What is it with Ospreay and axe-wielding nutters? Those distractions would play a part in his downfall as his dives to the outside allowed Taven to take control.

This wasn’t bad. Ospreay doesn’t really do bad matches. However, it wasn’t incredible, which is something he does do a lot. Taven just proved he wasn’t on Young William’s level.

Which is precisely what we got. It might have started a bit slow, but as time went on the action picked up and the final few minutes were fantastic. The Addiction did everything in their power to ground the big men and bent every rule they could think of to do so. War Machine aren’t the types to stay down easily, though. Ray Rowe took a beating and kept coming back for more.

And when Rowe comes back for more you should probably start running. The pure power of War Machine is awe-inspiring, and I’ll never tire of it. They make it look easy as they casually toss men through the air.

Put four talented men in the ring and let them go. It did exactly what it needed to do.

This was a mixed bag. The opening was slow and methodical. Both men looked like they were going through the motions and I was worried it wasn’t going to peak.

Then, it did. When they picked up the pace things suddenly got good. We got the good Marty Scurll. The Marty that performs in big matches and Lethal was there right alongside him. They were presented as two equals and who won would come down to the smallest margins.

Unfortunately, that wasn’t the case. The final few minutes were all about the story and not the wrestling. Scurll introduced a chair and tried to pull an Eddie, but Lethal was too smart. We then got some umbrellas and a low blow which set up Lethal for the Lethal Injection. Jay had embraced his villainous side which is what Scurll wanted, although Lethal didn’t exactly look happy about it. It appears this feud isn’t over.

Let’s take a second to appreciate Best Friends. They have been doing everything right recently from making World Tag League watchable to their fantastic pre-match interviews. They are quickly becoming my best wrestlers (see what I did there?).

Let’s not keep all the loving for Greg and Dustin, though. As someone who doesn’t watch ROH weekly, I’m always delighted to see MCMG on these shows. When I first started getting into non-WWE wrestling, they blew my mind. I’d never seen anyone work that fast and I’ve loved them ever since.

All of which meant that I was really looking forward to this and perhaps my expectations were too high. It was good and probably my favourite thing on the card at this point, it just wasn’t incredible. It felt like they weren’t quite on the same page in the early going and then the finish came out of nowhere.

Expecting wrestling matches to blow your mind is being unfair. These two teams are great and the way they transition between combinations is beautiful. This was by no means bad, I was perhaps expecting a bit too much.

I really like Punishment Martinez. He’s green, but he’s got something. That entrance was silly, though. He’d be better off avoiding the cheap Undertaker shtick and being a badass.

Unfortunately, the match wasn’t much better. This was dull, dull, dull. We got a cool Martinez dive and that was it until we were down to the final two of Young and Punishment. Even then, I’d struggle to call it good. A coherent storyline – Young went after the big man’s ribs and used that to neutralise his attack – at least made it watchable.

If you put four wrestlers that no-one cares about together, it’s hardly a surprise that people still don’t care when we come to the end of it. I finished watching this three minutes ago and the only thing I can remember is Young bopping King on the head with a beer bottle. This was like a bad turkey on Christmas Day. Dry and tasteless.

How many ECW reunions are we going to sit through before that company is put to bed? Am I the only one who doesn’t care anymore? Dreamer and Bully have a combined age of 92 for fuck’s sake.

Grumbles aside, the build to this was done well. The Briscoes are at their best when they’re unhinged because, well, look at them. They also worked their arses off here. Dreamer and Bully are still capable of wild brawls but they need opponents who move, and that’s where Jay and Mark came in.

Look, this had its moment. The lightsaber spot was amusing and the crowd were having fun. However, it was an ECW style hardcore match, and that doesn’t do it for me anymore. We’ve seen hardcore taken to extreme lengths and this didn’t keep up. You’ve either got to kill each other or combine it with incredible wrestling to stand out. Instead, we got a mediocre brawl with a bad finish. This was edgy 20 years ago, now it’s kind of sad.

Post-match ROH announced that they were given the Women of Honor a title belt. I put this in the same category of what I said about the first women’s match in York Hall. I’m glad it’s happening. That doesn’t change the fact it should have happened a long time ago.

This was about one thing. Flips. I don’t care how much it annoys the internet or MMA fighters with too much time on their hands, I wanted to see these six men flip and damn it the boys flipped.

They flipped so well that I’m not even sure who the best flipper was. Flip Gordon is very good at it, but Dragon Lee and Titan are exquisite. The bump Lee took on the apron off a Tornado DDT was particularly sick. Even Hangman did some stellar work with his moonsault to the outside.

This was a Young Bucks spotfest which, at the moment, is preferable to an Elite six-man theatre production. It’s not everyone’s taste. It is to mine.

They did it. They actually put the belt on Dalton Castle. Thank God for that.

I am delighted for Dalton. Ever since he stepped into ROH, he has been a revelation. He is playing a character that doesn’t seem to fit in their serious wrestling promotion and he has made it work. The guy is (and excuse the use of the word) fabulous.

I wish I could be as effusive in my praise for the match. Sadly, it was a Cody main event which means it was all stalling and short-cuts followed by an abrupt finish. At least here that abrupt finish included the payoff of Cody losing. Still, it’s not what I want from my ROH main events. They shouldn’t need Brandi Rhodes leaping from the top rope to create moments.

Of course, like most Cody performances, I’m also not saying that this was terrible. Castle’s comeback was solid and there’s no denying that the visual of Cody’s face caked in blood combined with his newly blonde hair was striking. Judging by the wound I’ve seen, it wasn’t a blade job, but it was one of those times that accidental blood added to a match.

The problem is that I expect more from ROH. I want main events that I will remember for years. While I reckon Castle’s title win will stick around, I doubt the fifteen minutes that came before it will.

This was fine. It kind of bounced along the acceptable line. Occasionally it crept above it and every now and then it dropped below. The only moment that will linger in the memory is Castle winning the big one. However, that’s such a cool moment that I’m kind of fine with that.