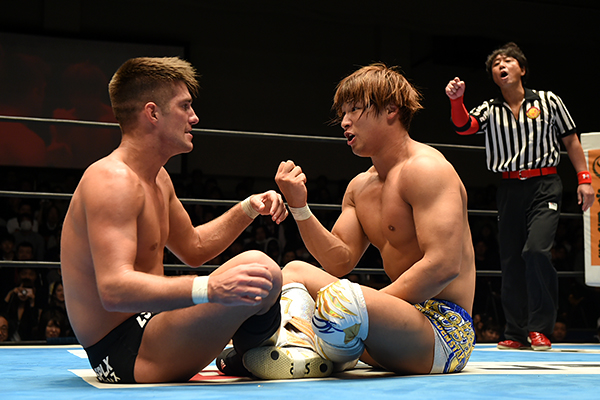 Our second batch of quarterfinals provided a lovely looking main event as Ibushi and Zack Sabre Jr found themselves drawn together. We’ve also got Yano vs Sanada which, yea, well, it will be something. The undercard isn’t quite as exciting as it looks pretty familiar to anyone who has been following the tour, but we’ll battle through. Let’s dish out some stars. 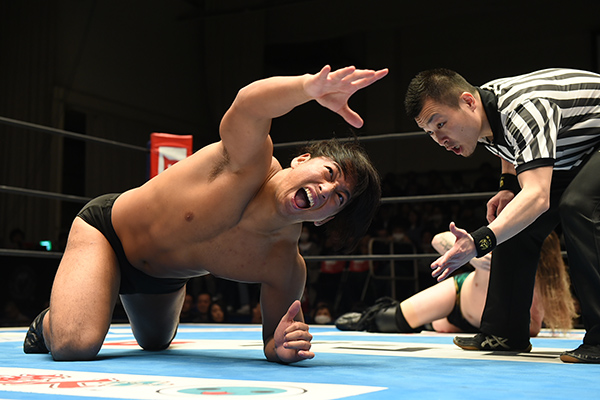 Oka and Narita kicked us off by showing off some of their wrestling skills up until Umino tagged himself in and squared off with Finlay. These matches are a rare chance to see Finlay control the action. It’s a pleasant change of pace, and something I hope we get to see more of in the future.

I feel like I’ve reviewed a million Young Lion outings on this tour and yet they always slip into the two and a half to three-star bracket. They’re an enjoyable group to watch and are already doing better work than the likes of Iizuka. The future is bright. 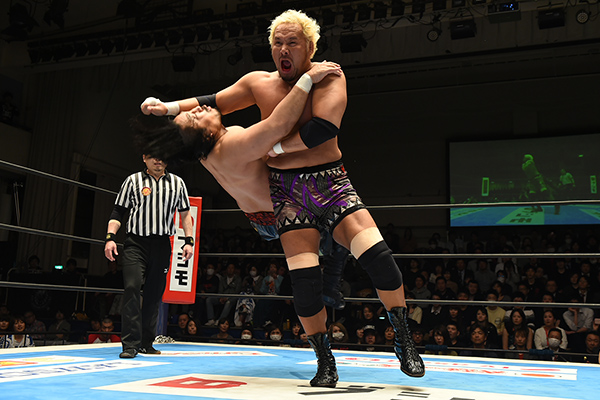 Big Togi is back after having some time off with an injury. He and Henare had an incredibly unsuccessful World Tag League, although it was the tournament in which Henare seemed to find his feet, so from that point of view they did well.

Part of what helped Henare find his feet was that Makabe isn’t a fan of tagging in. A facet of their team that continued here. Makabe started off against YOSHI, tagged out and then spent a long time on the apron. He came in for his mildly hot tag, took one bump off a Ushigoroshi and then disappeared again, leaving Henare to take the fall.

None of which particularly bothers me. If anything, I find Makabe’s ability to avoid work inspiring. Plus, Henare is ten times more interesting at this point. He’s this wild bundle of energy that charges around like a madman. The more time he gets with pros like HASHI and Goto, the better. 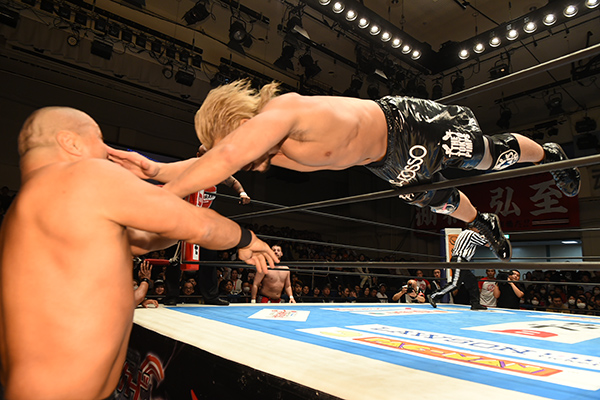 Sending these ten men down to the ring is asking for my brain to switch off. Even Chase couldn’t get me to care about this.

However, it turns out there was one man who could get me on the edge of my seat. It was, well, Yujiro? Trust me, I’m as surprised as you.

After the usual dirty tactics from Suzuki-gun, Takahashi got the hot tag and came in fiery. The crowd followed along, suddenly making some noise as he reminded people he can wrestle. That wasn’t the Yujiro we’re used to seeing in these multi-mans, it was a man who cared. I’m intrigued to see whether this was a one-off or is the start of something.

Sadly, he wasn’t rewarded with the win as Killer Elite Squad continue to run roughshod over Bullet Club’s underlings. That’s either heating them up for another Tag Title shot or they’re going after the NEVER belts. Neither move strikes me as particularly inspiring. 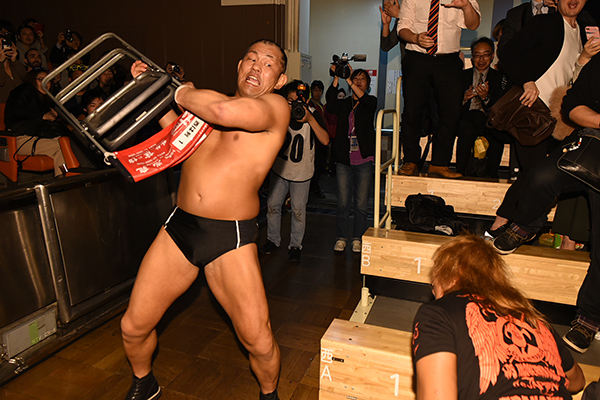 1,2 Murder Grandpa is coming for you. Credit: NJPW

New Japan continues to tease the fans with Suzuki and Naito. We actually got a bit of action between the two in the opening seconds as Suzuki got a few kicks in before Naito ran away. He was winding up the grumpy old bastard which struck me as a horrible idea.

I was right too. For when Suzuki spotted his chance he lept on it. Charging across the ring and booting Naito in the face before dragging him into the crowd for a beating. I know we’ve seen that spot a million times, but it’s amazing the difference Suzuki’s anger made to it. The cackles he omitted while he tortured Naito were terrifying, and the whole thing came across as a shocking sneak attack.

He then returned to the ring to torture poor Hiromu a bit. Takahashi has been getting very slappy with his fellow Juniors, and perhaps Suzuki wanted to teach him not to get too full of himself when it came to trading blows. He shrugged off Hiromu’s wild strikes with a laugh before slapping him right back, causing Takahashi’s legs to crumble underneath him.

Naito somehow survived the beating he’d been given and came back to dispose quite quickly of the Suzuki-gun juniors. Unfortunately, that just put him back on the bossman’s radar, and he was prowling the outside waiting for his chance. When he got it, the beatings intensified. New Japan has put these two on a collision course and everything they did added to my excitement. Chemistry was crackling off the pair and damn will that be good.

Our ungovernable friend finally escaped Suzuki’s clutches and sent in Hiromu and Bushi to try and see him off. It didn’t work, a Gotch Piledriver to Bushi put this to bed. What a fantastic undercard match, though. Suzuki was on fire here and came off like a man possessed in his mission to destroy Naito. That passion lifted everyone’s game. 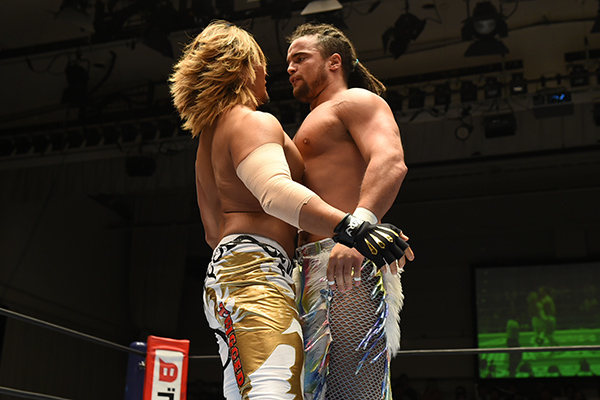 Elgin is a piece of shit and, if you can, please donate to Mo’s GoFundMe which she is using to raise money for her legal battle against him.

I do, however, have some things to say that don’t involve the big twat. There was a fascinating ménage à trois being built between Juice, Tanahashi and Okada. The semi-final opponents were on the same team but both of them wanted a shot at the Champ, and it led to some bickering. Okada, meanwhile, was more than happy to stir that pot. It was an effective way to add a bit of heat to that babyface vs babyface encounter. 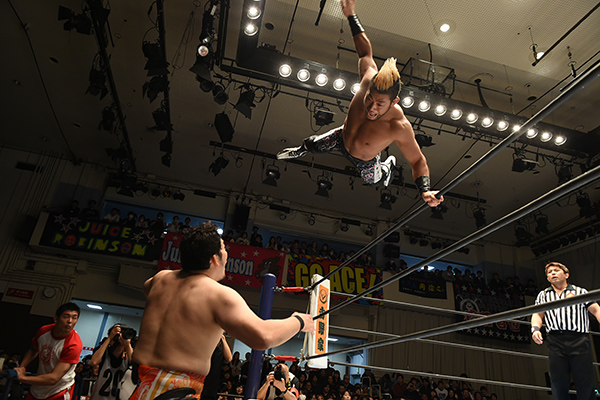 Despite his cool and languid persona, Sanada actually manages to out goof Yano at times. He started off with by pulling Yano’s shirt over his head before going into a sickeningly long rolling cradle.

We then got a throwback to their G1 match as Sanada went for the Paradise Lock on the outside. Yano was able to escape, though and kicked Sanada over the barricade almost causing him to be caught by the count out himself.

So, as you can tell, we were in antic central. To be honest, you’d have had to have never seen these men wrestle before to expect anything else. However, Sanada did seem to draw a more aggressive side out of Yano. He was choking him with his t-shirt and tried to bash his skull in with a steel chair. It was still Yano crap just with an added edge.

And whether you enjoy this or not will depend on your tolerance for Yano crap. If the sight of him waddling down to the ring, DVD in hand, fills you with revulsion, it ain’t going to change your mind. While he and Sanada have great chemistry, he is who he is.

He nearly stole the win too, Sanada only stopping disaster by grabbing the ref’s hand during a flash pin. Thankfully, it was only a brief shock and the Cold Skull picked up a victory soon after. He then took out some frustration by locking Yano, the ref and a Young Lion in the Paradise Lock before sauntering off.

I’ll be honest, I enjoyed this. Sanada and Yano are a fun combo and they delivered again. Classic wrestling? Nah, but it did a job. 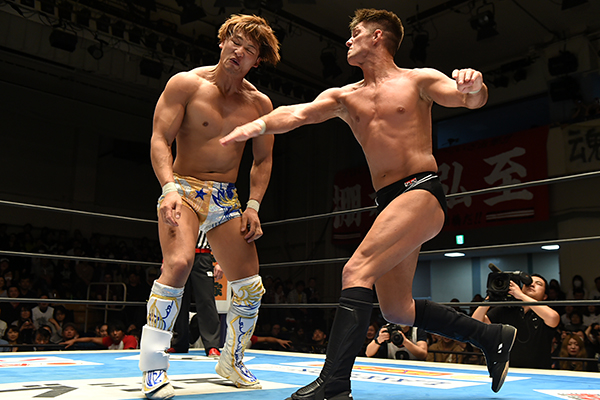 I thought we were going to be friends! Credit: NJPW

These two started off slowly, like two chess grandmasters evaluating their options. Zack was looking for his chance to get Kota on the mat and start doing what he does best. However, he was also aware of Ibushi’s ability to kick his head off. He had to get a hold of him while not putting that grumpy face in danger.

Even when Zack had Ibushi in holds, he had to be careful of those legs. Ibushi was perfectly capable of kicking his way out of submissions, and when he delivered one strike, he quickly followed them up with more. Each blow chipping away at Sabre’s armour.

The problem is that Zack was doing the exact same thing. This was full dickhead Sabre, and there are few things better. Every chance he had he would grind into Ibushi, wearing down his limb of choice and opening it up to even more torture. It wasn’t even one specific limb, he rotated around them, presumably leaving Ibushi with a list of aches and pains.

It got to the point where these two were just throwing everything they had each other. Strike after strike, hold after hold. It became a question of who could survive the longest without being forced into a mistake by exhaustion.

And the answer was everyone’s favourite dickhead. Ibushi had his chance, he almost got Sabre in position for the Kamagoye on more than one occasion, but Zack just wouldn’t accept that. He was desperate to avoid being kneed in the head, and he managed to sneak out of the way, locking on a lethal Octopus in the process. Ibushi collapsed to the ground, his arms bent behind his back while Zack stamped and elbowed the back of his head. However, he wouldn’t quit. He just couldn’t do it.

There was no getting out, though, and Red Shoes saw that. He quit for Ibushi, calling for the bell and putting to an end a fantastic match. This has been one hell of a New Japan Cup and these two still managed to raise the bar. They went to war against each other, strikes vs submissions and in the end, submissions reigned supreme. 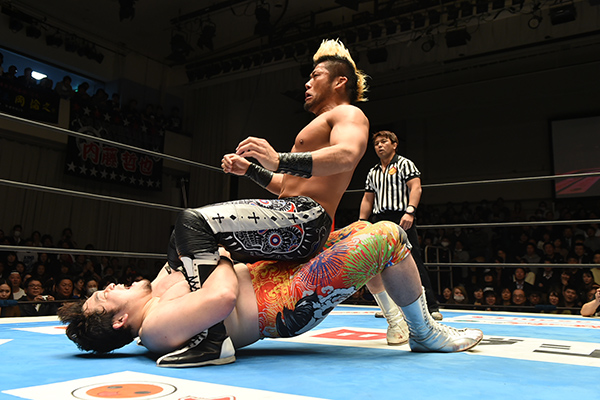 So many things about this picture are perfect. Credit: NJPW

A really good show and an even better one if you don’t hate Yano. There were a couple of undercard outings that felt like they meant something, with Suzuki vs Naito and the Juice vs Okada vs Tanahashi three-way. Then we had the main event which is easily the best tournament performance so far. It was two of my favourite wrestlers giving everything they had and damn did they do well. If you don’t watch anything else, make sure and catch that.