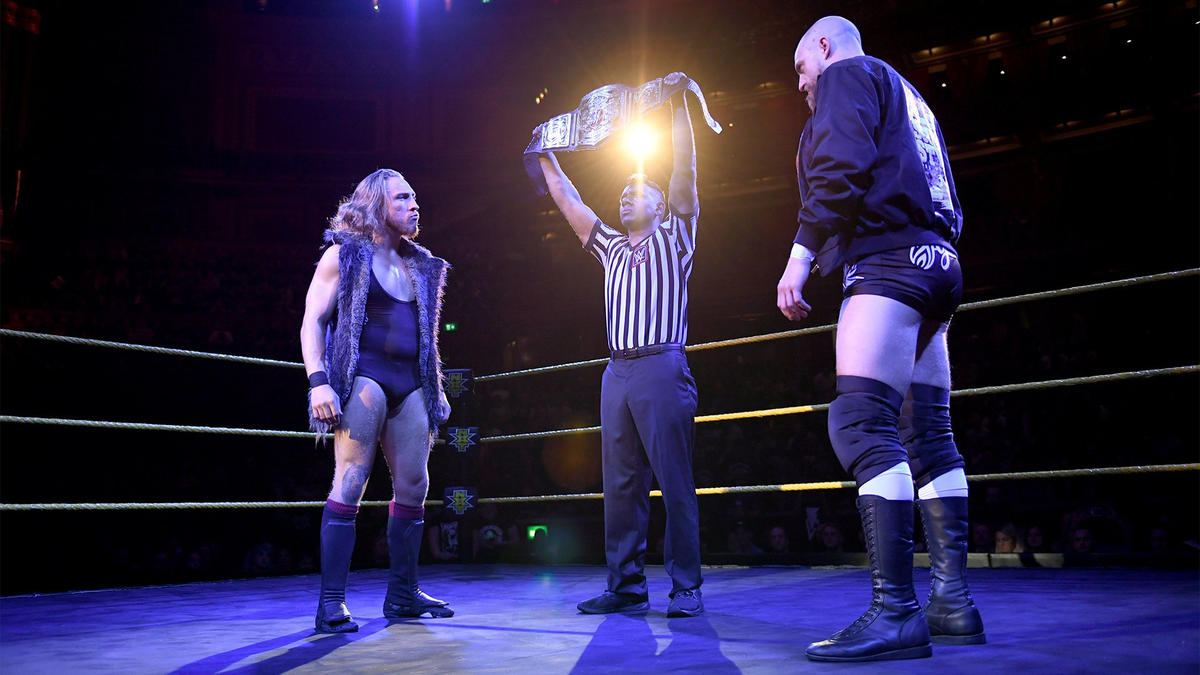 Night two of WWE’s stint at Royal Albert Hall could be classed as the first ever episode of NXT UK. Although something tells me that the cards won’t be quite this stacked every week. On paper, it had the potential to make you feel all fuzzy inside. Let’s see if they succeeded. 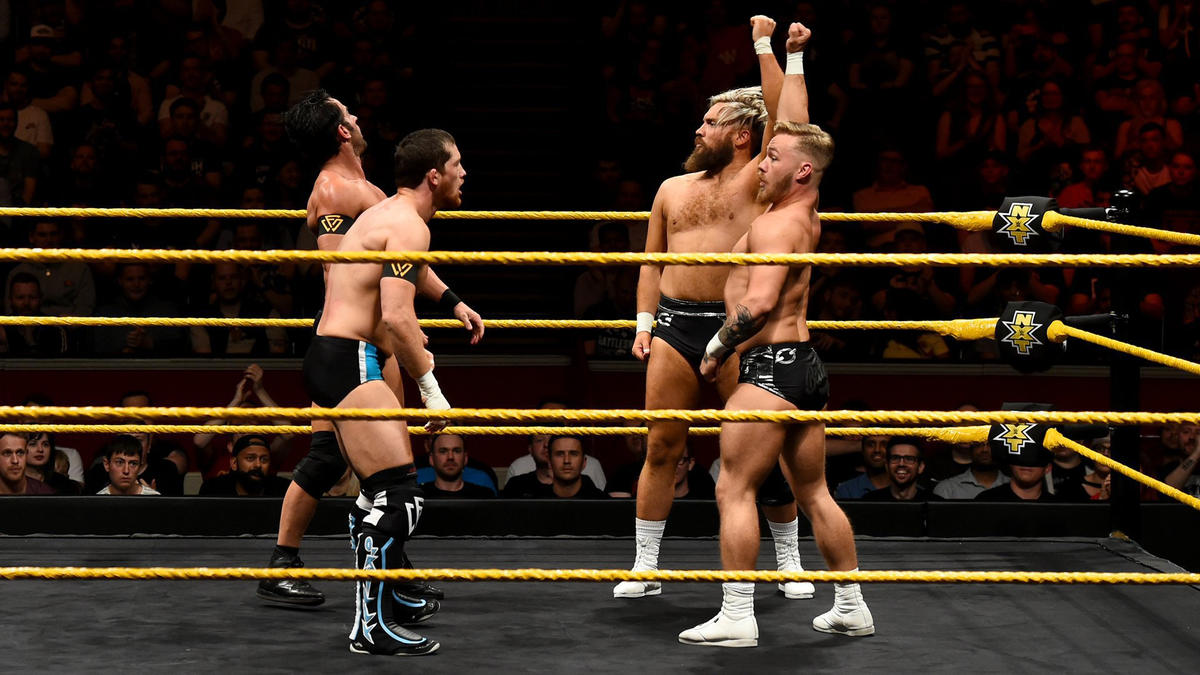 Guess what happened next? Credit: WWE

Undisputed Era took a while to get going in NXT, but they’ve become an in-ring highlight. They followed up on their hot opener at TakeOver Chicago by doing the exact same thing here. I love that they are willing to go back and forth with their opponents, bumping around like madmen and throwing themselves across the ring to save their belts. They are masters of the frantic bout.

It helped that most people will have presumed they were to retain against Moustache Mountain. The Undisputed Era’s near falls consistently had the fans on tenterhooks as they were confident they’d spell the end. With each Moustache Mountain kick out, the atmosphere would notch up a few more degrees.

Because NXT clearly wanted to draw some attention to their new brand by handing Moustache Mountain the titles. Some miscommunication between the champions set Bate and Seven up for the win, and the Royal Albert Hall exploded.

An explosive opener that delivered in-ring and gave the fans in attendance a special moment. You can’t say better than that.

Verdict: Four And A Quarter Stars 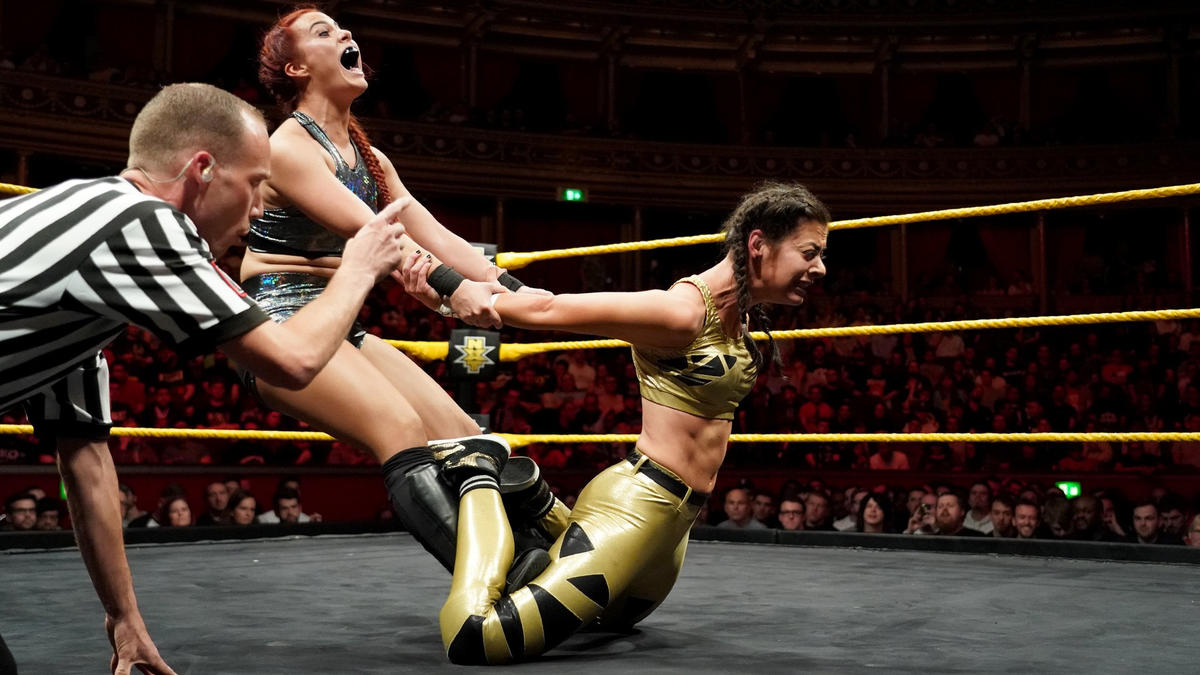 Sadly, this wasn’t very good. It felt like these two had rehearsed what they were doing but not quite enough. The various spots they ran through were mechanical as they never seemed to slide into the effortless flow that the best performances have. Instead, it was clunky and disjointed.

Hopefully, it’s just a case of two young wrestlers being overshadowed by the occasion as they are unused to WWE’s larger ring. They were following a hot opener and never seemed to get going. I know for a fact that Kelly is capable of better and whenever I see people talking about Morgan it is positively. I’m confident they’ll go on to do much better in the future.

Verdict: Two And A Quarter Stars 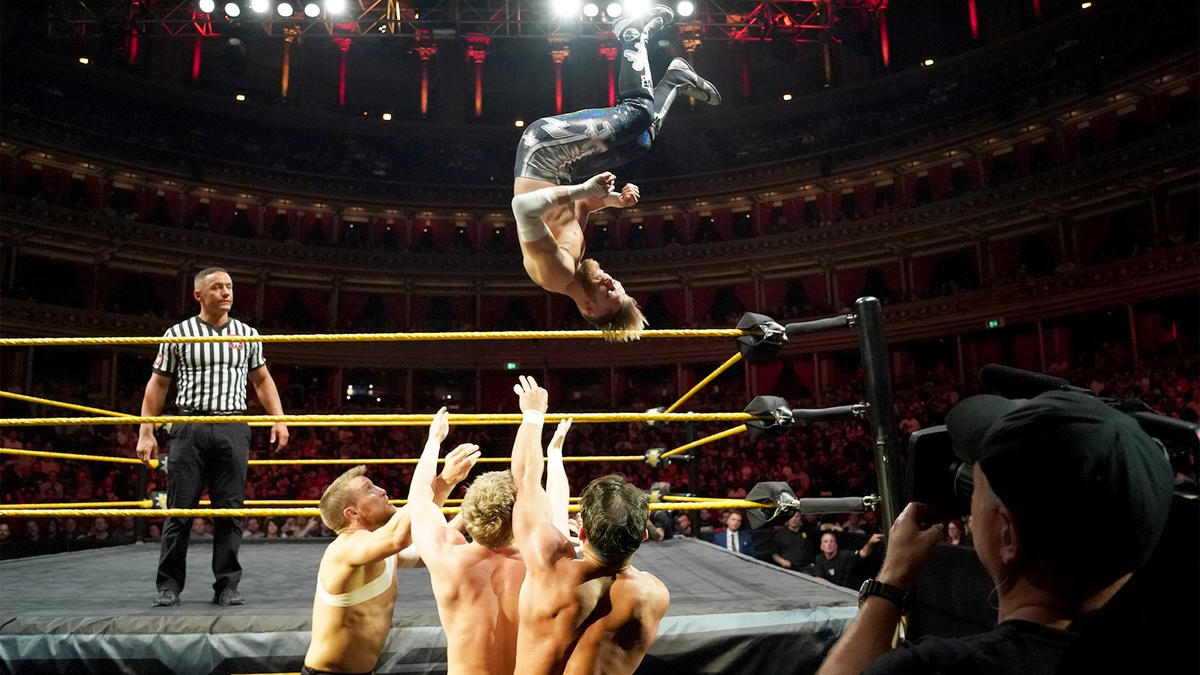 Dar wasn’t initially involved, but Johnny Saint came out and turned it into a ‘Four Man Fatal match’. While Saint is a legend, his TV appearances so far have suggested they should keep his on-camera involvement to a minimum. I’m sure the wealth of experience he brings will be put to better use behind the scenes.

These four did what you’d expect them to do. It was a sprint with bodies flying through the air and everyone getting their chance to shine. You didn’t want to take your eyes off it because the odds were that you would miss something incredible.

It’s noteworthy how good Dar looked. Coming off six months out can’t be easy, yet he slipped straight back in. Noam seems to have spent some of that time in the gym too, as the boy looks ripped. With the reinvention of 205 Live plus the introduction of NXT UK, let’s hope he gets a chance to show what he can do this time around.

I can’t imagine watching this and not having a lovely time. It was a frantic dash from four talented wrestlers. Get yourself a drink, sit back and have some fun.

Afterwards, Mark and Joe Coffey hit the ring and took out everyone apart from Dar who did a runner. I’ll be intrigued to see how these two get on. As a general rule, they’ve done their best work apart. Let’s hope they can change that. 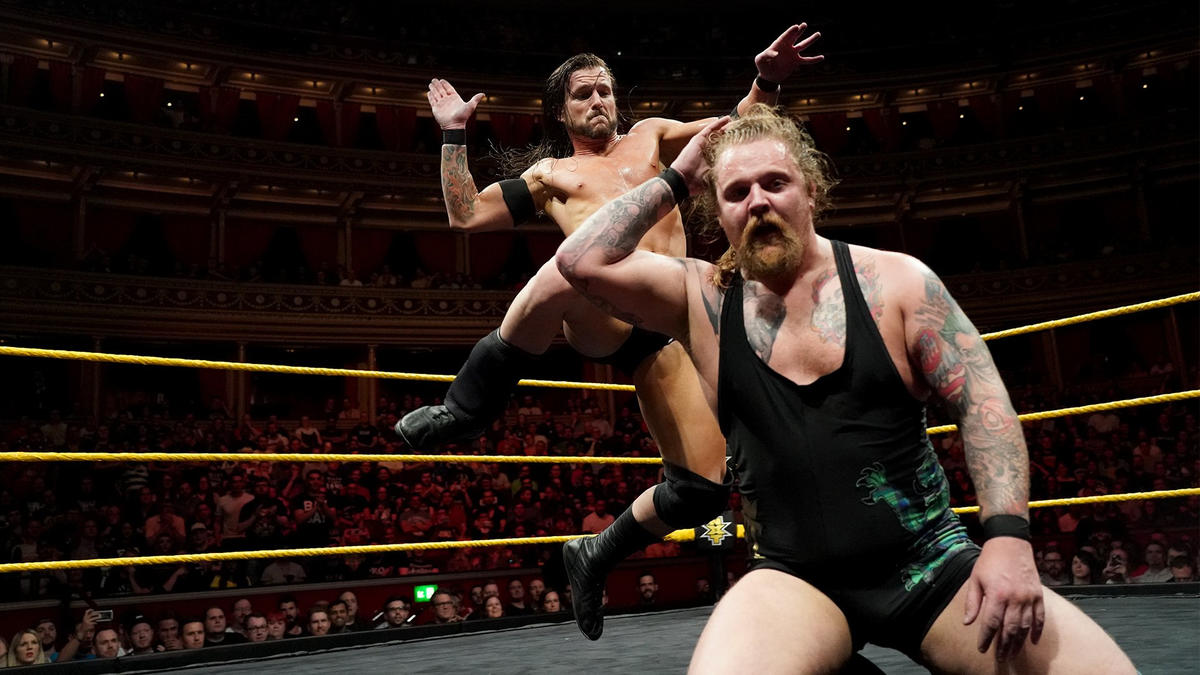 I love this photo. Credit: WWE

As someone who doesn’t watch NXT every week, I can safely say that I’d forgotten the North American Championship was a thing. With the UK belt seemingly set to become a bigger deal, it feels irrelevant.

Even with that problem, Adam Cole continues to be inexplicably over. The UK crowd actually turned against Wolfgang in favour of cheering for Cole. Don’t get me wrong, Adam is decent enough. He puts on some alright bouts, but his popularity far exceeds his ability.

It was a state of affairs that worked in Wolfgang’s favour as it allowed him to play up his brawler style. The big man was bringing the aggression and looked good doing so. It’s a while since I’ve seen Wolfie work and he’s developed an intensity that was sometimes missing in the past.

However, the tale of the match was that the fans got to Wolfgang enough that he began playing up to them, milking their reaction. That gave Cole a chance to recover as he caught a flying Wolf with a Superkick.

It set up a gruelling final few minutes as both men fought to find the energy for the win. In the end, a missed Swanton by Wolfgang would prove critical. He came down hard on Cole’s raised legs which allowed Adam to follow-up with a Brainbuster onto his Knee and a Last Shot for the win.

As much as I had a dig at Cole earlier, this was a good performance. Wolfgang held up his end of the bargain too as they nicely exceeded my expectations.

Ricochet and Aleister Black defeated The Velveteen Dream and EC3 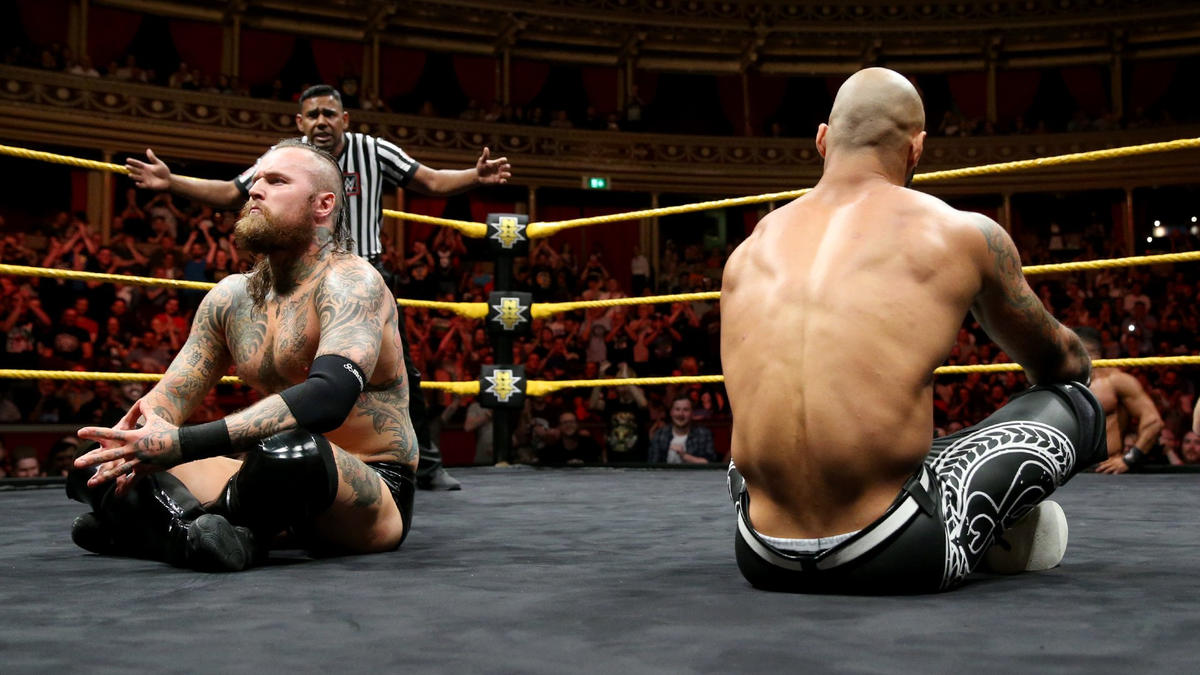 These teams were slightly mismatched when it comes to in-ring talent. Dream and EC3 have their upsides, but the onus was definitely on the babyfaces to guide them through this one.

It was an issue they got around by having the heels keep things simple. EC3 played the muscle while Dream was out there to push the story. He played off his feuds with both opponents and spent most of the match working on his mind games.

Sadly, towards the end, things went off the rails a bit. Dream went to the top only for EC3 to knock him off-balance when he pulled himself up using the ropes. At the time, it looked like Dream had slipped and it was a botch that they were moving on from. Then, Dream began selling his knee and five minutes later (during which time he and EC3 worked together fine) decided to wander away from a tag. Something was lost in the telling as I assume they are laying out the kindling for a feud between those two.

Despite that, it was a decent contest. Black and Ricochet could have been wrestling a couple of plastic bags, and I’d have enjoyed it, so that shouldn’t be a surprise. 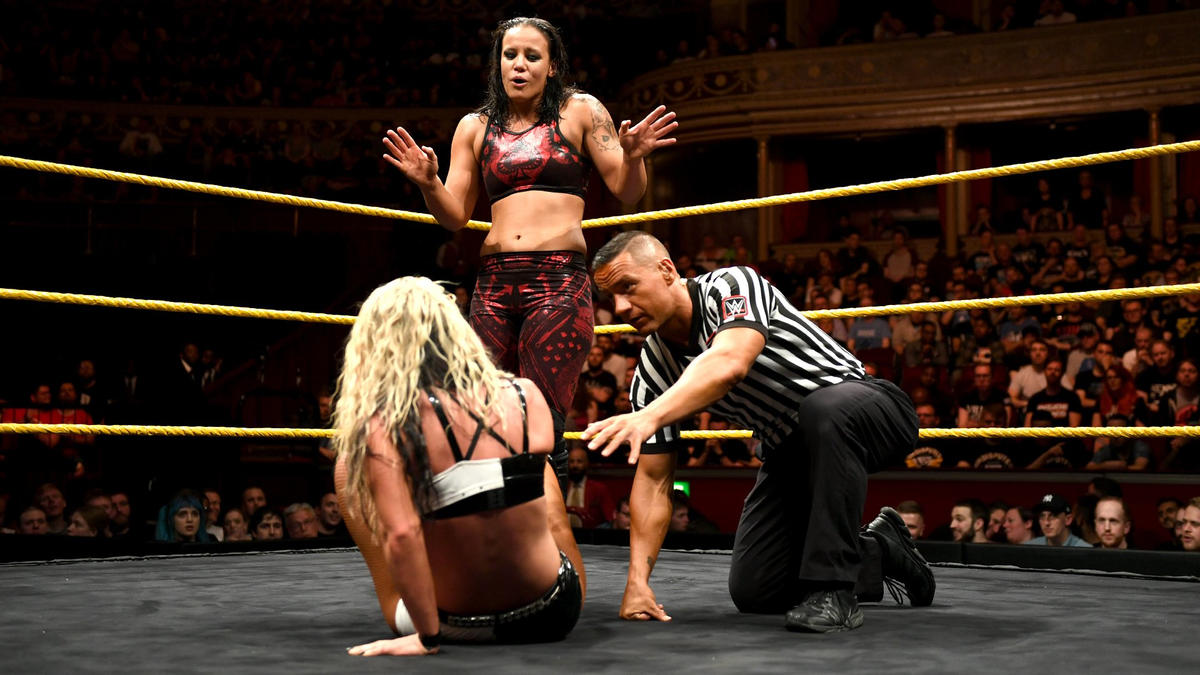 Shayna Baszler is an exceptional prick. You buy that she believes she is the greatest thing on the planet and her style is legitimate enough that you begin to think she might not be lying. The way she took control of this match and then toyed with Toni on the mat was a great visual, made all the more impressive by the fact that Storm is usually so dominant.

That period saw her working over Storm’s leg in a similar style to what she has been doing with Dakota Kai’s shoulder. It’s a rare thing to see Toni working on the backfoot, but she did a good job. While some of her selling got a bit screamy, she was putting across the idea that her leg was in agony and that every bit of offence required her to fight through the pain.

It was a story that took an already partisan crowd and added a little sprinkle of spice to their reactions. Toni working from underneath got them all hot and bothered, so when she did get on the offence they were right alongside her. Every kick out and every move saw them get that little bit louder.

All of which served to make the finish an exquisite piece of booking. Toni Storm is a star and having her lose clean to Baszler this early in her run would have been a mistake. Instead, Shayna realised she couldn’t make Storm tap so dragged her to the floor, choked her out and left her there for the count out. It was a finish that continued Baszler’s domination and yet gave Toni an out. She didn’t give up.

Baszler went back for a bit more afterwards, putting a dominant full stop on my favourite performance from her so far. 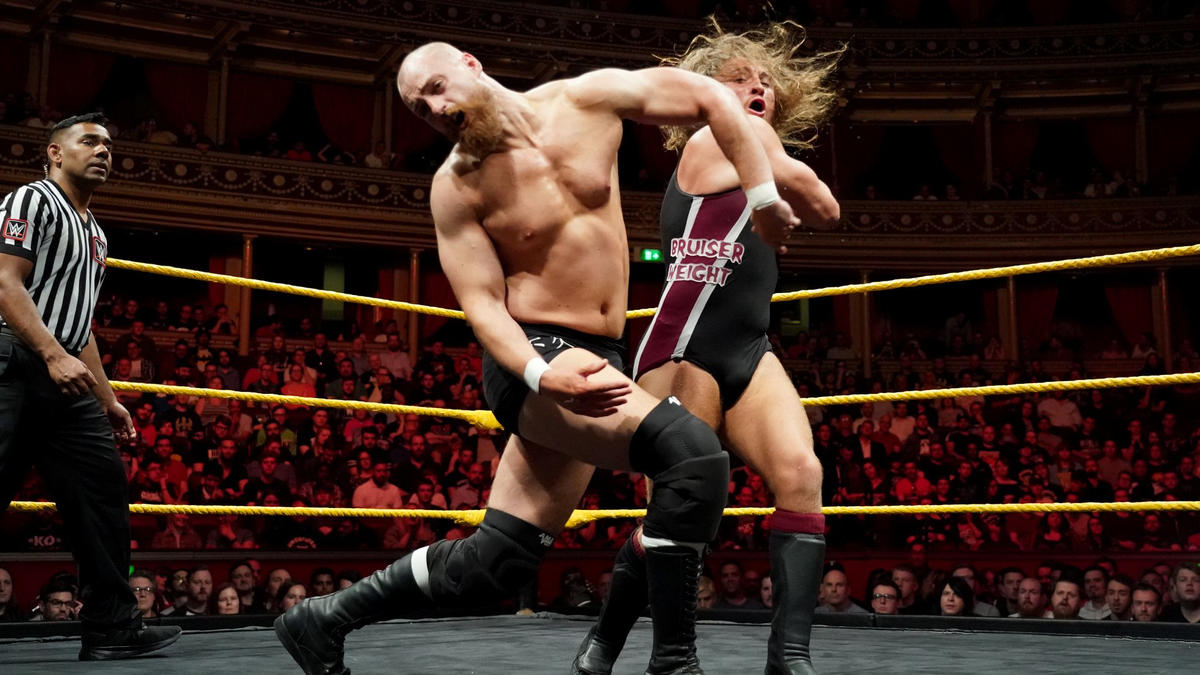 Down you go. Credit: WWE

Two absolute bastards in the same ring. One beloved, one hated. Both damn good at displaying that bastardry for all to see. The question was, who is the better bastard?

Well, for a lot of the match it seemed to be Pete Dunne. While Gibson was having his moments, the champion was looking like the better man. Working over Zack’s left arm and never seeming to be in danger. That Bruiserweight style was proving the difference as Gibson was unable to take control on the ground.

So, Zack fought fire with fire. Screw working a limb, he drove an elbow into the back of Dunne’s head and started punching the hell out of him. Suddenly these two were brawling, throwing everything they had at each other. At one point they stood in the centre of the ring throwing headbutts until they both collapsed, exhausted by the effort they’d exerted.

From there, they somehow only ramped it up. An Avalanche Helter Skelter followed by a trip through the Shankly Gate seemed to be setting up a new champion. However, Dunne fought back, snapping Gibson’s fingers before smashing him out of the air with an elbow. It was enough to set Zack up for the Bitter End and with it the demise of his dreams of holding that belt.

Has Pete Dunne had a bad performance in WWE? He doesn’t work for them every week of course, but still, he always fucking brings it. This was no exception as Dunne continues to be the natural choice to lead this division. You’ve got to love him.

Verdict: Four And A Quarter Stars

What I didn’t love was Papa Paul leading the roster out onto the stage after the main event. What is someone like Toni Storm doing out there? She just got choked out and left for dead, she shouldn’t be standing around looking proud. NXT always does stuff like that, and I’m not a fan.

Still, I shouldn’t end on a bum note because that was a fantastic show. I’m still not entirely convinced NXT UK is a good thing. The exposure is a positive, of course, but I wonder if the territories were saying similar things? Plus, it’s the smaller indies that are going to suffer which is where some of the best matches happen. That’s a discussion for another day. For this was some great wrestling, and a promising start to whatever it is WWE has planned.

If you enjoyed this article, please consider contributing to my Ko-Fi by clicking here. Even the smallest donation is appreciated.