Around two-thirds of the way into Money Monster it is tough to see where it is going to go next. Until that point, it has been a tight thriller all set within the confines of one studio. However, it becomes apparent that that portion of the film has lost steam and that something new has to be added. When it does come to be it loses everything that has made the film work and drops the whole thing into the ridiculous.

Which is a real shame, because Money Monster has until that point been gripping. We watch as George Clooney’s arrogant and quite frankly twattish television host, Lee Gates, is taken hostage by an irate Kyle Budwell (Jack O’Connell). Budwell locks down the studio in which Clooney presents his all singing all dancing (literally) stock market show and demands answers as to why a stock that Gates described as safer than your savings account lost him all his money. Meanwhile, Julia Roberts’ Patty is in the control room trying to talk Gates through the situation and at the same time make sure that this is gripping TV.

When the film is focused on those three characters, it is great. Roberts doesn’t share the screen with the other two, instead communicating purely with Clooney through his ear piece but the two of them continue to show the chemistry they have had in the past. O’Connell meanwhile proves there is a reason he is being looked at as one of our brightest young stars. Budwell is a deeply unsettled man, and yet he manages to make us understand his point of view. By the time that third act comes around, you are almost rooting for him despite the fact he is waving a gun around and threatening to blow the studio sky high. 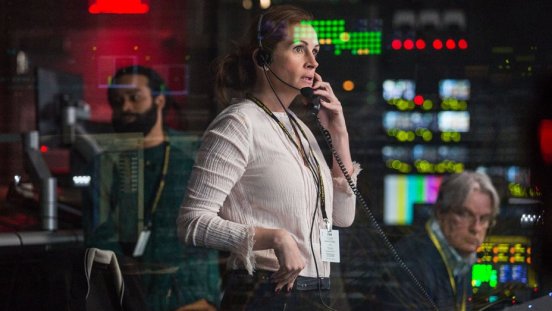 Which isn’t all bad. Some of the films points are point across well particularly its reflection on the watch and discard nature of social media. Ultimately, it becomes a bit too ungainly for its own good and in doing so loses its bite. Despite that, Money Monster is worth your time. At just 90 minutes long it is in and out before you know it and there are some genuinely funny moments of humour. If nothing else it is worth watching to see Roberts, Clooney and O’Connell show off some incredible chemistry.