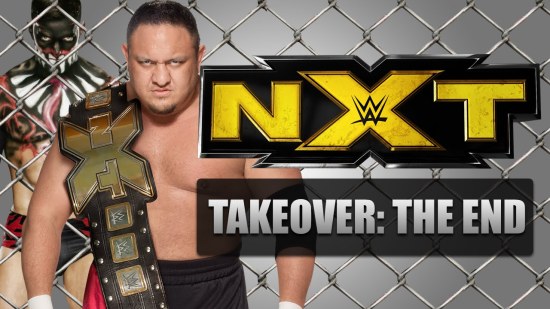 NXT TakeOver: The End has proven to be many things, but despite rumours it does not seem to signal the end of NXT. For one thing, they have a TV taping tomorrow so that would be a massive waste of time. What it definitely was, is yet another great wrestling show for WWE’s supposed developmental territory.

How lovely was it to see Tye Dillinger get that response from the NXT faithful? The guy is a safe pair of hands, and I hope he finally gets a proper shot after this showing. On the flipside, Andrade ‘Cien’ Almas came out to crickets. NXT is great at making new talent seem like a big deal, but Almas’s entrance didn’t do much for me. The white hat looked a bit silly, and there was nothing that stood out about him. However, the match itself was solid to good. When Almas got going, he was a joy to watch while Dillinger’s superkick to him in the corner was a thing of beauty. I hope we see more of these guys in the future.

The Revival pin American Alpha to win the Tag Titles

In my preview for this event, I predicted that American Alpha could lose and head up to the main roster. I was right on one hand, but wrong on the other as the debuting Authors of Pain (which I believe is their name) seemed to set up a new feud for NXT’s most popular team. This match was everything we have come to expect from these teams and was even better than their match at WrestleMania weekend. I’ve said it before, and I’ll say it again, but The Revival and American Alpha should be the cornerstone of the WWE Tag Team Division for years to come.

The contrast between Aries and Nakamura was obvious here. Both of these guys are stars, but Nakamura has settled into NXT that bit quicker. It shows how important that first match is, and while Aries had a solid feud with Corbin, Nakamura stole the show with Zayn. If there’s any justice, this match will be the start of a change for Aries. I was pro turning him heel, but we got an incredible fight instead. It wasn’t quite to the same level of Nakamura Zayn, but it was still cracking, and it should lead to both of these men cementing their stardom.

Nia Jax isn’t good enough to be in this position. It’s not that she’s bad but when compared to the other women in the NXT Women’s Division she is miles behind them. There were hints here that she could get to that level, but her ring work feels clunky. Asuka, though, is brilliant, and she made Jax look like a beast. I love that she came in with an obvious tactic, make her tap out. It made it feel like she had watched Bailey’s win over Jax and had learnt from it. Much like Nakamura she screams charisma and I could watch her fight all day. With those things in mind, this was the right result and while it wasn’t the best Woman’s Title match we’ve seen it was solid.

Not Finn’s best entrance, but a solid effort. I do enjoy that he makes the effort at big shows. More wrestlers should vary their entrances, and not just do the same thing every time. Although in saying that, if Joe did anything but march to the ring like a badass I’d be disappointed. This felt like an old-school cage match. They used the cage a lot, and I liked Joes constant attempts to walk out the door. While leaving by the door is in the rules, it is a heel move.

There were some good moments in this match, but I don’t know if they did enough to get past the feeling of having seen this all before. It was by no means bad – I don’t think Finn and Joe could be bad – but I am glad that this should be their last match for a while. The right man won, but these two have had – and will probably go on to have – better matches than this.