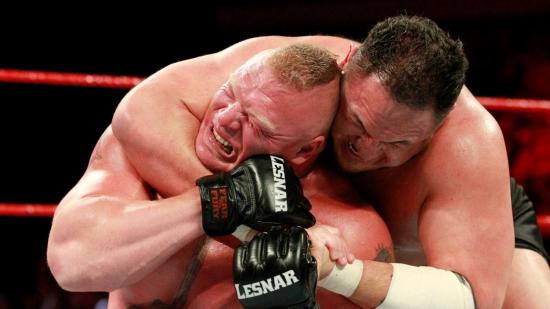 Should we be worried about the colour Brock’s face turns? Credit: WWE

Great Balls of Fire, a show name so ridiculous that we’re still waiting for the punchline. Yet, despite that (and posters that look suspiciously like a penis) this may be the best build to a WWE show since the brand split. Samoa Joe has suddenly found his feet on the main roster, and there are hints of interesting programs throughout the entire card. It’s just possible, this could be a good show. So here are ten observations from Great Balls Of Fire.

I complain about commentary a lot. It’s even got to the point where Good Old JR is disappointing me. Booker T, though, he might just be the worse. For Booker is not just a bad commentator, he’s a bad commentator who talks a lot. At least David Otunga has the decency to not be noticeable. Meanwhile, Booker just waffles. Go back and listen to that show and try and find me one sentence that he says which brings something to your enjoyment of it. I’ll wait.

The King Of WWE

It’s been a strange year for WWE in the ring, while we’ve had plenty of good to great matches it’s hard to pick someone who has stood out above the rest. AJ Styles has been quiet since WrestleMania, Kevin Owens has been screwed around too much, and Roman Reigns is Roman Reigns. The only person who could honestly claim to be worthy of Wrestler of the Year is Neville. Since turning heel, Neville has been on fire. He’s embraced his new character and become so much more than a great worker. His match against Tozawa was more proof of that. Not only did they have a good fight, but Neville continued to set himself up as a tough and intelligent heel champion. Long may it continue.

Even he looks shocked. Credit: WWE

In a shock move, WWE gave Bray Wyatt a win on a Network Special. Sure, the thumb to the eye meant it wasn’t clean, but it is still a start. Both Wyatt and Seth Rollins have been turning their wheels over the last few months and feuding with each other doesn’t seem to be helping them much. Let’s not pretend it is anything more than it is, filler. This match was alright at best, and in a month no one will remember it. If they do, it will be because of a rare win for Wyatt rather than anything that happened in the ring.

I’m really tall, so I must go up the card now, bye. Credit: WWE

Let’s make something clear, Enzo and Cass were a garbage tag team. Big Cass is big, and that’s about all he has going for him, while Enzo is reasonably decent at delivering over the top promos. The idea that they could ever be the guys in a company with so many great teams is ludicrous. Yet, their break-up might just be the best thing they’ve ever done. They’ve somehow managed to get some emotion out of the garbage, with Enzo showing an ability to get serious which might have helped them a year ago. This was more angle than match, which is what it needed to be. I don’t know how they finish this, considering Enzo can’t work, but so far they’re doing alright.

Iron Men Have Their Ups And Downs

Fifteen years ago, when The Hardys were a younger and a less beat up team, this match could have been something special. In 2017, it was a bit slow. They did a good job of making it part of the story, with Sheamus and Cesaro taking the early lead and defending it, but it made bits of this match downright dull. When the action sped up, it was fun and the final five minutes were great, but a straight up singles or even a two out of three falls match would have been better suited to these teams. With rumours that the Broken Universe is closer to being in the Hardys’ control, it’s no surprise to see them lose and we should be keeping an eye on Matt for hints of what comes next.

Such a cool moment. Credit: WWE

Alexa Bliss’s fake out with her dislocated arm was a touch of genius, and it was executed perfectly. It was so good that it’s a shame it didn’t play into the finish, as I can’t see how she can use it again. I spoke about Neville being wrestler of the year but if there is one person who could perhaps compete it is Alexa. She’s a great character, and every match sees her improve in the ring. WWE’s women’s divisions are struggling at the moment thanks to some dodgy booking – and I think you could include the finish of this match in that – but Alexa has come on leaps and bounds.

Watching Dean Ambrose and The Miz having the same perfectly competent match that they’ve been having for months I was really tempted to just skip it and move on. This feud ran out of steam back on SmackDown, the fact that it’s still somehow still going on Raw is ridiculous. Surprisingly, the addition of Bo Dallas and Curtis Axel hasn’t done anything to add to it. I never want to see these two in a ring together again. Sadly, the finish suggests I won’t get my wish.

Someone will pay for this. Credit: WWE

Roman Reigns is not as bad as people think he is and Braun Strowman is a charismatic big fucker. However, let’s not pretend these two are good wrestlers. They had a mildly fun brawl with one big spot, but it was nothing more than that. I did like the finish as it made Braun look smart, but they then ruined that by ‘keeping Roman strong’ with his silly ambulance shenanigans. In all honesty, I’ve had enough of this feud. It’s not quite at Miz Ambrose levels yet, but it’s getting close, and the idea of them doing all this shit again does nothing for me. Also, poor Heath Slater and Curt Hawkins. That’s how to make people look insignificant.

A Night For The Bad Guys

What is Bo wearing? Credit: WWE

Bad times don’t last, but bad guys do. Scott Hall would have felt at home at Great Balls of Fire as the heel locker room will have been rocking post-show. Lesnar aside (although there is an argument to be made that he is a heel) this was a night where those willing to bend the rules came out on top. Sure, Sasha technically won, and Roman tried to kill Braun, but even the pre-show didn’t see the babyface go over. This was an unusual night for WWE, and it helped the show a lot. Sometimes the big bads need to beat the heroes, and this was one of those nights.

Joe and Lesnar Bring It, But… 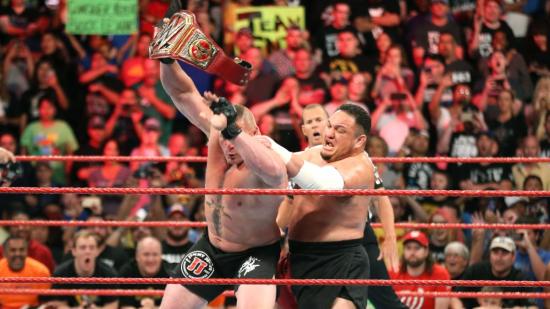 I was a bit sceptical about Samoa Joe vs. Brock Lesnar. I couldn’t help but feel it was fifteen years too late. How wrong I was. Joe has stepped up and shown the kind of fire those that used to watch him in Ring Of Honor will remember well. This is the Samoan Submission Machine, and fuck is he good. The only downside, he lost. And all things said and done, he lost pretty convincingly. I have loved this program but imagine if Joe had been given the push Goldberg got? That’s all I’m going to say.