Juice is the only person I’ve ever seen make that move look decent. Credit: NJPW

World Tag League might not have the prestige of the G1 or even the Super Juniors but this year has the potential to be interesting. They’ve left the big names out and brought in a load of fresh foreign talent to create some intriguing combos. It’s set up a tournament that promises to be a lot of fun. Let’s dish out some stars. 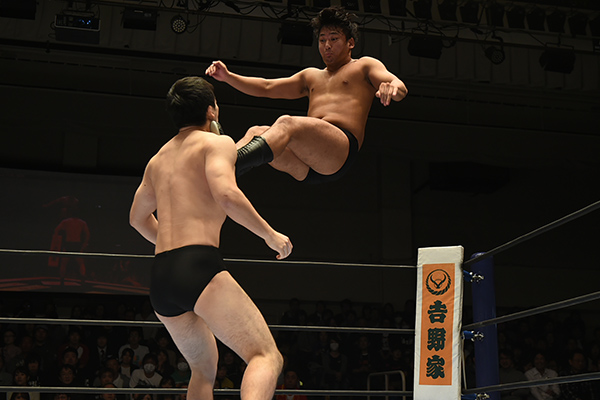 It’s not often you see a lion fly. Credit: NJPW

The Young Lions were fired up for this one.

It’s been a genuine pleasure watching this group of trainees come through. Umino, Yagi and Narita don’t get the hype that Kitamura, Oka, Henare and Kawato do, but judging by this showing, they are already perfectly competent wrestlers.

The unsurprising highlight was Kawato, though. Here, he was among his peers and rather than being the plucky underdog he was the badass of the group. They built the match around his hot tag and that beautiful springboard dropkick. He even got the win with a spinning enziguri rather than a Boston Crab!

You won’t see many better five-minute tags than this.

I don’t think I appreciated how big Leo Tonga was until I saw him tower over Oka. New Japan must be praying that he can fill out and get at least decent.

In this match, however, Young Lion MVP went to Oka who kicked things up and looked great doing so. Although the real stars were War Machine, who never fail to get me pumped. You could pluck either man from that team and build them into a star. The problem is that they’re so good together that I don’t know if you’d want to.

This was another well-worked tag. The babyfaces looked strong, and the Guerrillas got a win to heat them up heading into the tournament. Nothing to complain about. 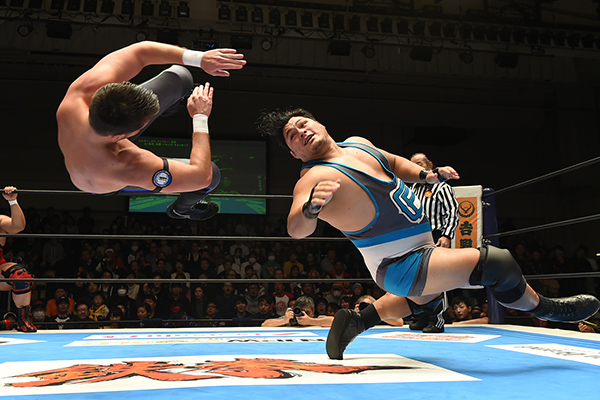 Give the man a contract. Credit: NJPW

Can we take a second to appreciate Ishii being teamed up with these three goofballs? In my head, he pretends to hate it and secretly loves it.

This match was designed to introduce the newbies, and it did a terrific job. Jeff Cobb took all of five seconds to prove he has star potential in Japan. He tossed all four of the CHAOS men over his head and with each throw the crowd reaction got louder. When he powered Ishii up for a suplex and then hit the standing moonsault, it was sealed.

Chuck Taylor didn’t have quite the same impact but got the fall over Kitamura which sets him up nicely for the future. Job done.

The New Japan dads take on the Bullet Club scrubs. Just a combined age of 194 for the dads tonight.

This match was summed up by the Fale Nakanishi combo. Slow and plodding. Still, you’ve got to give Nakanishi some credit, even getting Fale off the ground for a couple of seconds for the Argentine Backbreaker setup was impressive.

I’m being harsh. Nagata had some nice moments, and Chase Owens impresses me everytime he is out there. However, after three matches that felt fresh and exciting, this one had a faint whiff of mould. 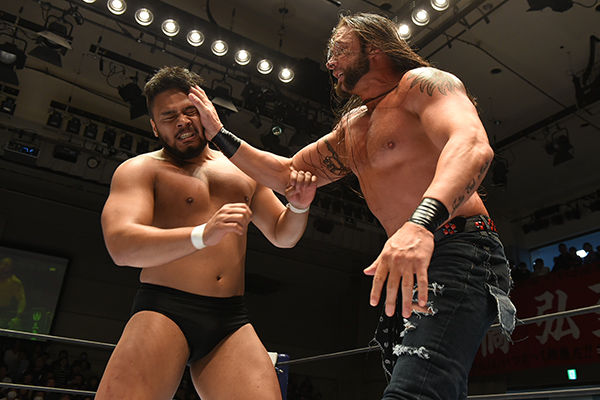 Not to go too thick on the pro-Young Lion bias, but this match wouldn’t have been half as enjoyable if you took out Henare. He took his beating like a champ and Suzuki-gun targeting that injured Achilles – which kept him out for so long – built a lot of sympathy for the young man.  New Japan even went as far as having Despy take the fall rather than him.

The rest of the match was fine. Tanahashi and Makabe aren’t exactly known for putting their working boots on for these shows so it was what you’d expect. It was a chance for the crowd to see the Former Ace and Makabe. 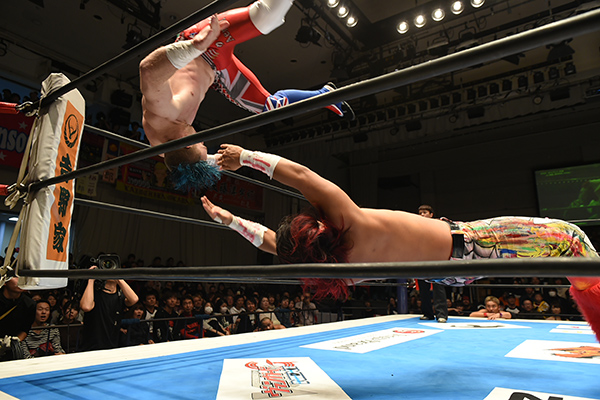 Takahashi doing to Will what a lot of Twitter wanted to at the weekend. Credit: NJPW

Guess what guys? It’s a CHAOS vs LIJ match, woohoo!

It was good, we’ve seen it a million times before and they were building to Wrestle Kingdom.

I may or may not have written this before the match began and felt no need to change it. 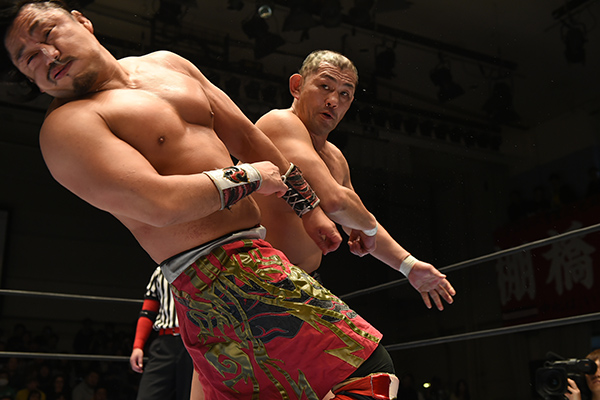 I’d rather have no Suzuki than have Suzuki with Iizuka. It guarantees that all of his matches are going to be shenanigan fuelled and, surprise surprise, they were heading to the outside before the bell rang.

Look, the match was garbage. Even when it did get to the ring, there was nothing to write home about. Although I did enjoy Suzuki beating up HASHI.

The only point of interest was whether it would set up the rumoured Suzuki and Goto match for Wrestle Kingdom. The answer was yes. The two of them worked the bulk of the match and with Goto getting the win it seems likely that they’ll transition into (another) feud. 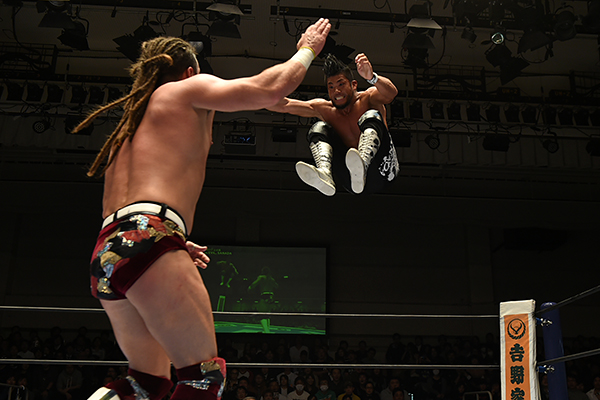 I doubt Sami Callihan cares about my apathy towards him. However, teaming up with resident favourite boy Juice Robinson is a great way to make sure I’ll watch some of your matches.

This is probably the most enjoyment that I’ve got from Callihan. His confrontations with Evil were hot and their similar bruiser styles meshed together well. He was fired up to impress and while I’m not entirely sold (and still have some significant concerns about incidents I’ve heard about in his private life), this was decent.

As usual, though, I only had eyes for Juice. His enthusiasm for wrestling makes him unmissable for him. He radiates joy when he’s in that ring and it almost makes the fact he’s outstanding a secondary part of it. The cold and methodical team of Evil and Sanada are perfect opponents for that fiery optimism and I loved watching it.

It was that fiery optimism that would win the day too as Death Juice (it’s an awful name) hit a shoulder breaker into a Pulp Friction to pick up the win over LIJ. They also gave us our first good match of this year’s World Tag League.

Big fan of the post-match Juice promo. The guy can’t get through a sentence without throwing at least one motherfucker in there. He should do them all from now on. 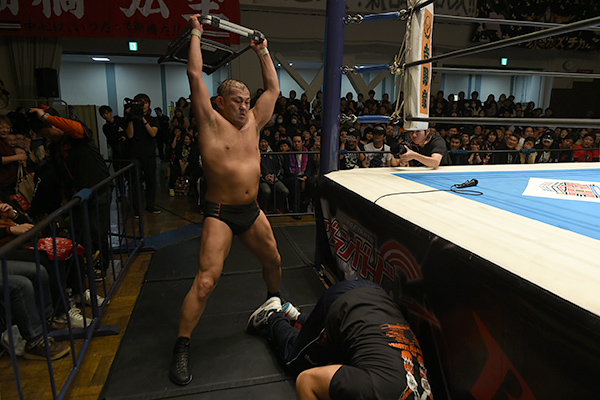 This show wasn’t packed with marquee matches or huge moments but it was watchable. The impact of the Young Lions alongside some fresh Gaijin talent made it fun to watch and most of the matches delivered. If this is how World Tag League is going to shape up, I am more than happy with that.