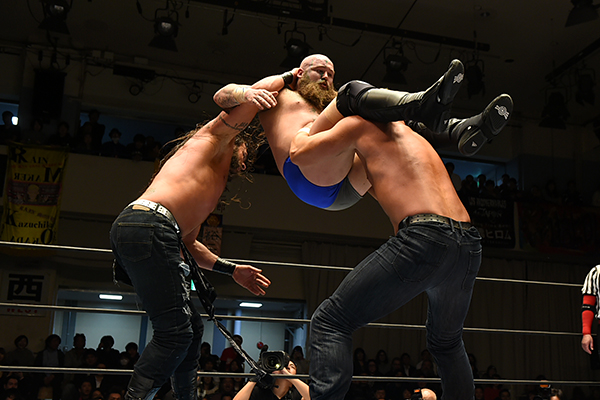 It’s a full show, and I don’t know how I feel about that. On the one hand, we get to catch up with the likes of Okada and Tanahashi and see how they’re getting on. On the other, that’s a lot more average wrestling to watch. Oh well, the review must go on. Let’s dish out some stars. 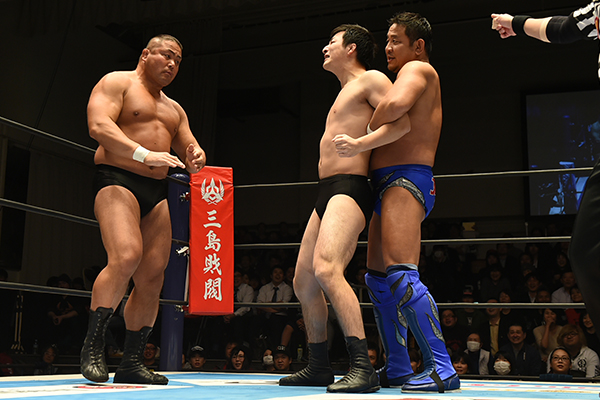 The New Japan Dads got a chance to eat up some Young Lions. Although Narita and Umino did get a bit of offence in and looked good doing so. Unfortunately for them, they paid for it afterwards.

This kind of match is always good fun, but the truth is you don’t need to see it. There was nothing special here, just a couple of young lads getting taught their lessons. 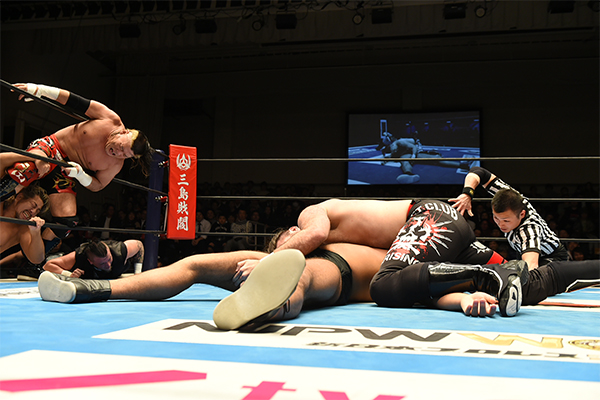 Poor Oka, his enthusiasm led to him getting the shit kicked out of him. Those nasty Bullet Club scrubs.

This was designed to give everyone their moment and, once that was done, it was time to go home. It was for those in the building rather than us watching at home.

It is worth saying that best undercard wrestler in the world Chase Owens has a lovely package piledriver. We don’t usually get to see it. 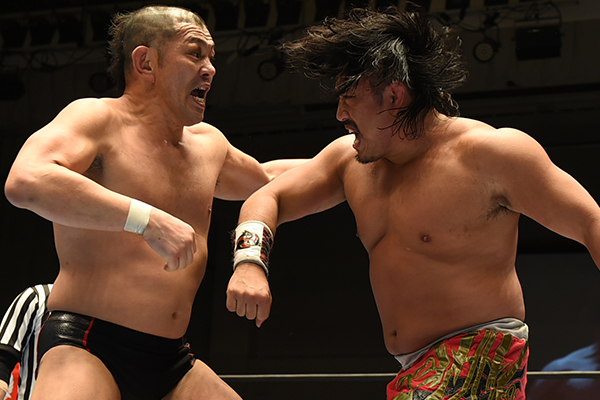 El Desperado is an improvement on Iizuka.

This served the double purpose of giving Goto and HASHI a win and continuing to heat up Suzuki and Goto. For the later, I reckon it did an alright job. They started hot and had the kind of stiff showing I want from them and which they never seem to give us. I liked that even YOSHI-HASHI making the tag didn’t stop them fighting as Goto was desperate to get his hands on the NEVER champ.

Unfortunately, after that was over and done with we slipped into Suzuki-gun mode. We’re at the point where I switch off when it’s happening. They don’t even do anything new. Someone gets chucked into the chairs, and then they get choked. It’s dull.

When I zoned in again we were back with Goto and Suzuki and, once again, they gave me a taste of what I want from them. If this is the style of match we get at Wrestle Kingdom, I’ll be a happy bunny. Let’s leave the other shit at home, yea? 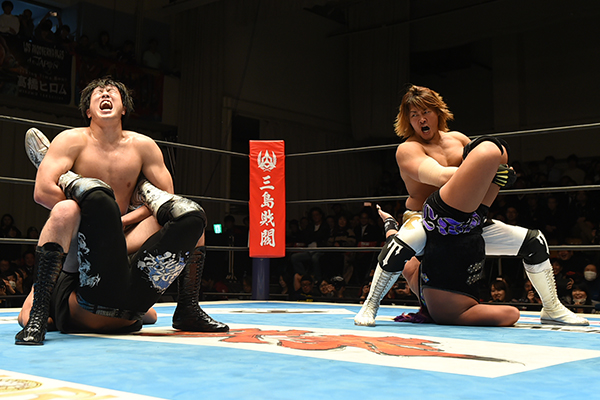 Wrestling with your hero. Credit: NJPW

God bless Kawato and his endless enthusiasm. I love the way he throws himself at opponents. It’s the second best thing about his act. The first being the way he takes a beating. The vicious application of the Skull End was a particular highlight in this one.

This was a mixed bag. I enjoyed Evil and Sanada working over Kawato and the Young Lion showing all of that babyface fire. However, having Tanahashi sell the Paradise Lock should be illegal. If it’s Yano, I don’t care. Tana should be above that shit.

I might be able to forgive that indiscretion because Tana did go on to commit the evilest act I’ve ever seen in a wrestling ring. He refused to tag in Kawato. Much like in The Simpsons, you can spot the moment his heart breaks.

Jokes aside, Tanahashi did eventually make the tag and LIJ put Kawato away. Paradise Lock nonsense aside, this was a decent match that kept the Sanada and Evil team strong. 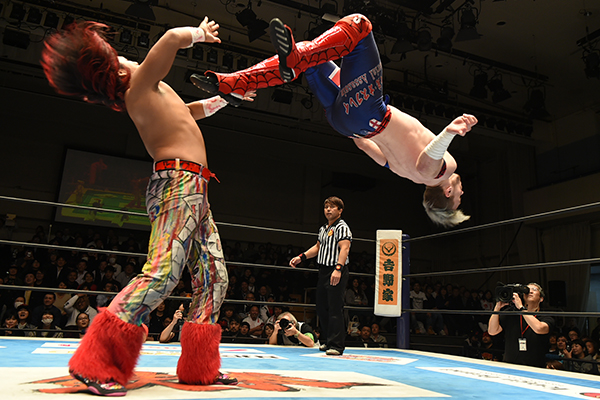 That was quick. No one was watching this and wanting the majority of it to be wrestled by Gedo, but that’s quite close to what we got.

Despite that, there was a taste of the good stuff as Okada went straight after Naito and Ospreay and Takahashi went all flippy shit in the ring. The speed those two work at is outstanding, and if we don’t get a single match between them sooner rather than later, I will be doing a different kind of shit flipping.

The Okada Naito stuff we got in this wasn’t so much wrestling as a straight up fight. This is being built as being for more than just the title, as they wage war on each other. I am perfectly okay with that. 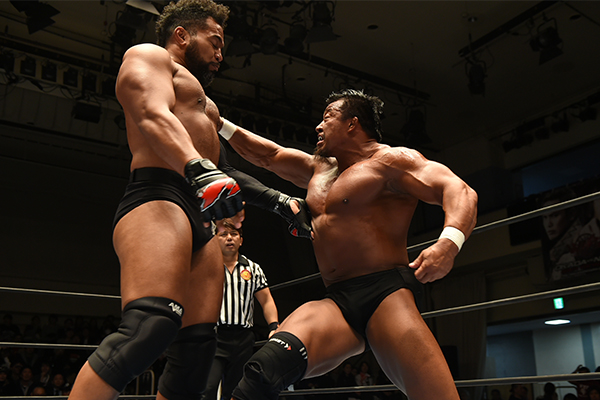 Look at those veins! Credit: NJPW

Kitamura continues to be presented as the star of his team. David Finlay came in all fiery in this one, but he barely spent a minute in the ring before he was tagging back out to his Young Lion buddy. The beast that is Kitamura is the one New Japan are interested in.

And, GOD did a decent job of making him look good. They sold those chops like they were lethal weapons and unlike in the Cobb and Elgin match, he didn’t botch the military press slam. He’s getting there. 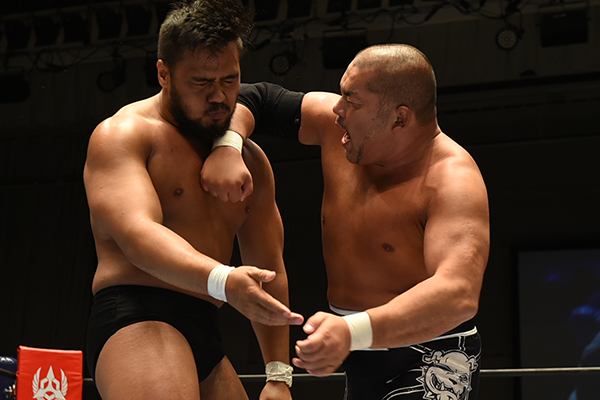 These two team really went after each other at the start of this one. I don’t know if I’ve missed something, but it seemed unnecessarily violent.

Nowhere was that more evident than when Ishii and Henare were stiffing the shit out of each other. This could have felt like a lesson was being given. However, Henare gave as good as he got. He suddenly re-found his feet post-injury. It turns out all he needed was for Ishii to smash some sense into him.

This was a nothing match on paper and yet became something purely down to the efforts of the Pitbull and the Young Lion. I’m going to go as far as saying you should give it a watch. 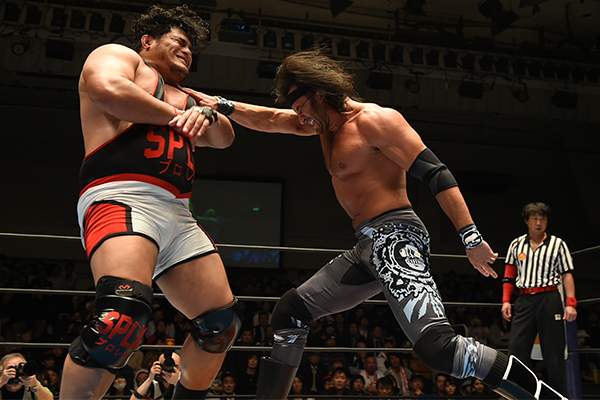 Right, before I review this I have to talk about Michael Elgin. Over the last few days, some stuff has come out about him that has flipped my opinion of the man on its head. I can’t call out Bram and Callihan and ignore this issue because I enjoy his work. At the moment, I’m not going to stop reviewing his matches because there are other people involved in them but I am open to suggestions on how to deal with this (and similar cases) going forward.

On to the action, which was fantastic and easily the best of the tournament so far. These have been my stand-out teams and they showed why here. We got Elgin and Cobb’s brute strength vs Best Friends intelligent speed. In the opening stretch, those things led to a somewhat even contest. Then the big men got angry and it turned into domination.

Even as they were chucked around the ring and smacked silly, Best Friends managed to look great. They absorbed the damage and refused to give up. At one point I swear they were trying to murder Beretta and they still couldn’t get the three. Only in wrestling can you get the shit kicked out of you and come out with more fans than you had going in.

In the end, that unwillingness to give up would allow Best Friends to eek out a victory. They took the best that two of New Japan’s hardest hitters had to offer and refused to stay down. That’s how you turn wrestlers into stars. 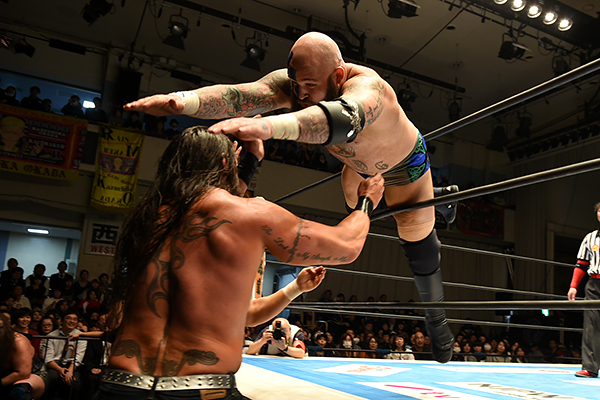 If the last match was a bit of a storytelling masterpiece, this was a fight. Two big-ass teams went out there, hit each other really hard and swore at each other a lot. Right from the opening with Archer and Rowe teeing off on each other’s chests, you knew what you were going to get, and I loved it.

There was no subtlety or beauty here. It was rough and aggressive. Both of these teams flourish when they are in there with guys that are happy to hit them. Mainly, I think, because it gives them permission to hit them back.

I didn’t enjoy this one quite as much as the one before, but it was still a hell of a lot of fun. We got these two teams facing off plenty in three-ways with GOD, and yet, this was the first time (that I’ve seen) they’ve gone one-on-one. On this evidence, I’d happily watch it at least a couple more times in the future. 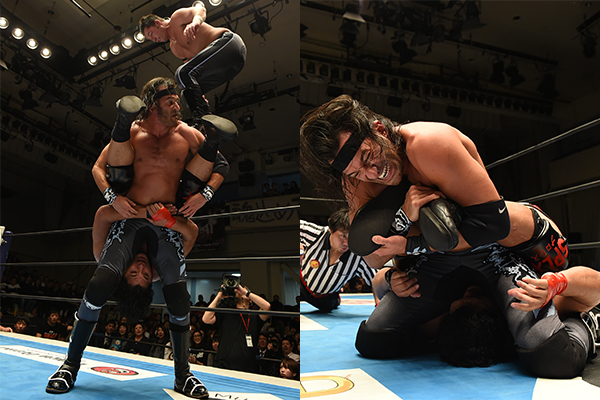 Wow, World Tag League just delivered! This was great. Easily the best night of the tour so far and I wouldn’t be surprised if it was still in that spot come to the end of it. The undercard had a lot of two and a half star showings but the final three more than made up for that.