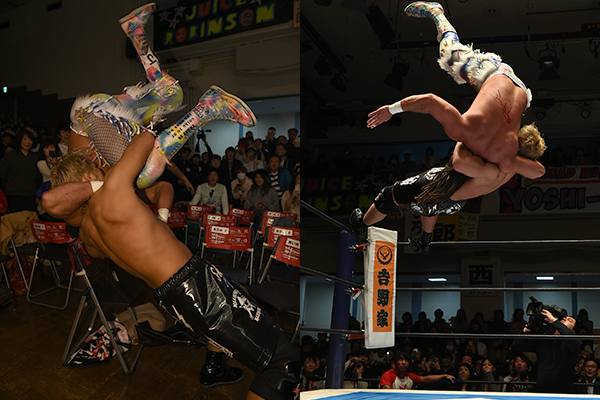 It’s New Japan Cup time. I don’t like to think about last year’s edition as it led to the retirement of one of my favourites. However, Shibata did deliver the match of his life at Sakura Genesis. Let us hope that we keep that element and ditch the career-destroying injury. Let’s dish out some stars. 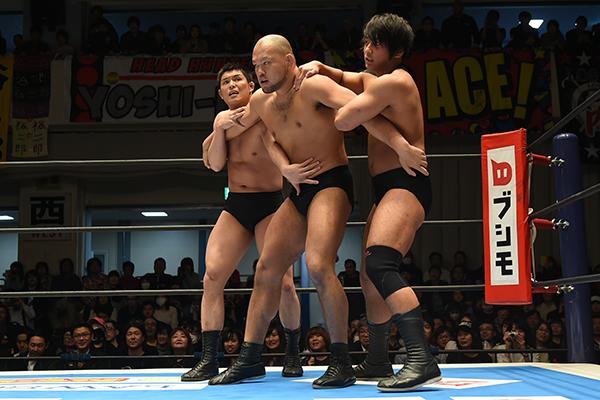 I’ve got this, lads. Credit: NJPW

Chuckie T and Toru Yano would either both be the best night out or the most irritating.

In saying that, Yano got all serious here. His desire to give Yagi a beating seemed to overcome his urge to piss about. Okay, he didn’t turn into Suzuki, but it was a surprisingly straight beatdown for New Japan’s jester.

The real highlight was Oka’s newfound desire to kill Hirooki Goto. I wonder if he’s spotted how Henare’s quest to beat-up Ishii has got him over and fancies doing similar? If he has, I’m okay with it. Oka is solid in-ring with it being his personality that needs work.

All in all, it was your standard New Japan Young Lion opener, which means it was good. They even gave our great friend Chuck a win going into his first New Japan Cup. Can’t say fairer than that. 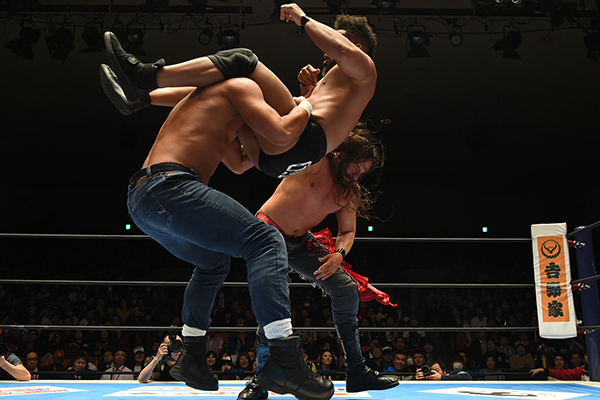 I’m not sure Archer is adding much. Credit: NJPW

It says a lot about Killer Elite Squad that I hadn’t even noticed their absence since Wrestle Kingdom. Any germophobes in the audience won’t have been happy to see the return of Lance Archer.

I’ve rarely enjoyed KES vs Guerrillas of Destiny. Replacing the more talented member of GOD with Fale wasn’t going to be the way to change my mind.

My issue with these teams together is that they are always so fucking slow. Having someone in there who could bounce around for the others would improve the matches immeasurably. Instead, it’s four big guys engaging in a plodding brawl. In a world where we have hosses like Keith Lee and Jonah Rock doing incredible things, this shit doesn’t cut it. 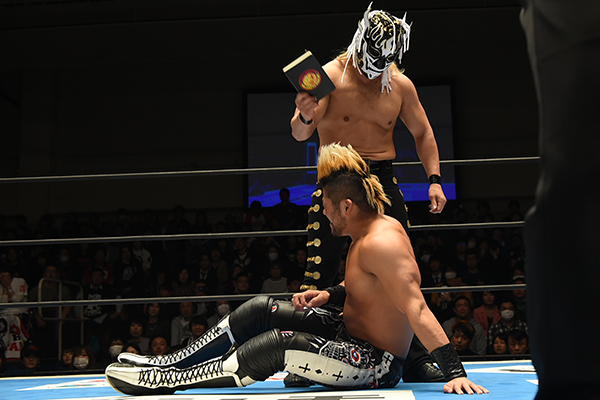 He threw the book at him… Credit: NJPW

Chuck Taylor has joined Kevin Kelly on commentary, so the show just got ten times better.

Early on, El Desperado got his grubby hands on a notebook and started hitting people with it. Suzuki-gun, always finding news way to cheat.

Both teams were playing to their modus operandi here. Suzuki-gun dived into their bag of dirty tricks while LIJ went with relaxed indifference. While it’s perhaps not the best combination, it had its moments.

Most of those moments involved Zack Sabre Jr.  He made his mission to attack Naito’s shoulder ahead of their match. We didn’t get much of the two, but it was enough to generate excitement. Sabre could wrestle anyone at the moment, and I’d watch it. 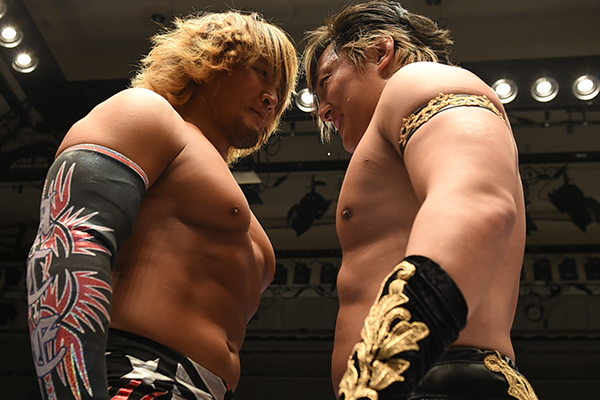 Suzuki didn’t wait for the introductions to finish before welcoming Tanahashi back with a kick to the knee. Never change. It wasn’t even my favourite Suzuki moment. That came when he spotted a new Young Lion in the crowd. He then said hello to our new friend by hitting him with a chair.

If you’re into watching Irish blokes get choked, then get excited. Poor Finlay got stuck with Iizuka and took all the punishment for it. Then, just as he thought it couldn’t get worse, Suzuki entered the ring. Poor David.

The main story was Suzuki vs Tanahashi with the grumpy old bugger continuing to wreck the former Ace. He’s softening up that knee nicely for the Taichi victory I’ve been predicting.

I usually hate Suzuki-gun multi-mans. However, this was decent enough. Taichi got a nice win while Suzuki and Tana’ continued their feud, job done. 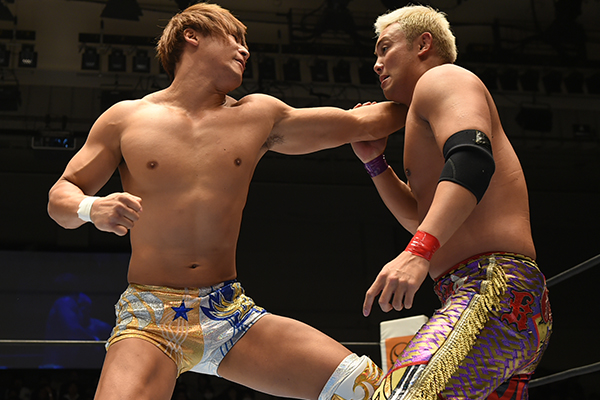 Let’s have this match without the silly mask. Credit: NJPW

I hope Kota Ibushi and Chase Owens are real-life friends. Two men who are entirely different and yet bonded by their affection for Kenny Omega. I’m getting into fan fiction territory again.

Chuck Taylor pointed out that recent months have seen Okada getting weirder and weirder. I didn’t realise how right he was until he said it. Little Kazu is going off his rocker. I’m not going to lie; it only makes me love him more.

It should be no surprise that this was damn good. It had the greatest undercard wrestler on the planet in it, Mr Chase Owens. Throw in the slightly talented Okada and Ibushi, and you’ve got a recipe for success.

Joking aside – and honestly, I’m only slightly kidding about Chase, he’s excellent – this was fun. There was a hint of YOSHI-HASHI and Ibushi ahead of their encounter and a solid win for Okada over Owens. Nothing you’ll go back to, but with this much talent, you’d be silly to skip it. 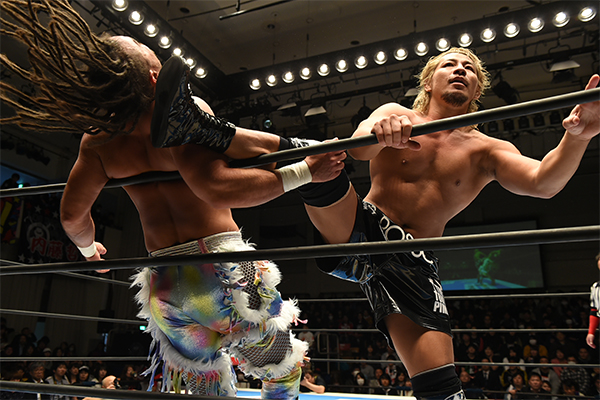 A casual boot to the head. Credit: NJPW

So, Juice is sticking with that outfit? It’s a brave choice.

I thought this was going to be shit because it had Takahashi in it. However, for the second time in recent months (the first being his feud with Beretta), Yujiro proved me wrong.

And interestingly, that thought process played into the match. Because Juice also underestimated Takahashi. He strutted down to the ring expecting to breeze through to the next round. Instead, he got a fight and Yujiro looked like he could pick up the victory on more than one occasion. Takahashi might not be as talented as Juice, but you only have to look at Juice’s outfit to figure out that he’s smarter.

It was those brains that Yujiro was able to use to get the advantage. Robinson came up bleeding when Takahashi hoisted him over the barrier onto some chairs, using Juice’s momentum against him. Then, when Juice left his gameplan behind and went up top, Takahashi was able to crotch him on the turnbuckle, following up with a Super Fisherman Buster. The pop when Robinson kicked out suggested the fans bought that one.

Towards the end, Takahashi almost murdered Juice with a Tokyo Pimp (literally, the first attempt came close to being a scary botch) which kicked off a finishing sequence that saw Juice battle back to claim the victory. This was ten times better than it had any right to be. For all his many faults, recent evidence suggests that if you give Yujiro Takahashi something to care about, he’ll perform. 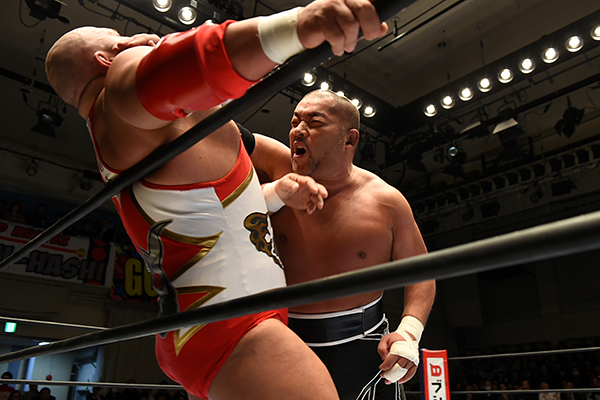 I hope he hit him hard. Credit: NJPW

Look, I don’t exactly hide my feelings for Michael Elgin, and there’s a reason I don’t review his matches. However, I can’t claim he is not a good wrestler. So, you have to ask, why the fuck was he trying to kill Ishii? I spoke about the Yujiro’s Tokyo Pimp attempt being scary, but it was nothing compared to that Splash Mountain.

It wasn’t the only moment either. Elgin was as sloppy as a pig’s breakfast here. It made something that I already wasn’t able to enjoy because of his involvement even more horrible to watch as I was terrified he’d hurt one of the world’s best. Thankfully, Ishii seemed okay. I hope he doesn’t take it personally that I step away from reviewing this one. It’s Elgin that’s the piece of shit, not him. I can safely tell you that Ishii was great because he always is. Even after some prick has dropped him on his head.

Rather than waste any more words on Elgin, I’m going to point you in the direction of Mo’s GoFundMe. Elgin is bringing a lawsuit against her, and while she has reached her target, there’s every chance she’ll need more money. Plus, she’s promised any surplus will be donated to her local domestic violence shelter. If you have any spare cash, please support her. 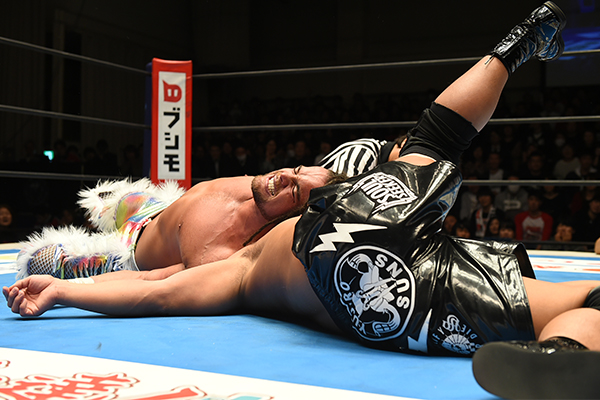 Not the best show New Japan will ever put on but an enjoyable one. I honestly think I could watch ten hours of Baron Corbin matches and enjoy if Chuck Taylor was on commentary so that probably played a part. Throw in a few decent undercard tags and a surprisingly entertaining outing from Takahashi and Juice, and you should enjoy it.