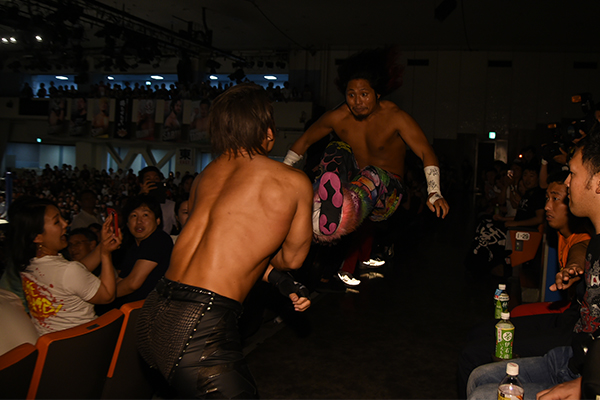 Gosh, you always forget how long these tournaments are until you’re halfway through them, realise you’ve fallen five shows behind and need to write reviews of them all. Okay, that might not be a universal experience, but it’s been a long old road to get here. More importantly, though, it’s been a fun one, and the juniors have delivered some outstanding matches. Now it’s time to find out if the final can cap it all off nicely.

A fun if inconsequential match-up. Sabin and Gordon were enjoying themselves while Tiger Mask came out and got all grumpy. I loved how unimpressed he was at Flip’s showing off. Umino, meanwhile, is a constant source of delight for me. I love him like he’s my son. I’ll even forgive him for getting pinned by Flip Gordon.

Recently I’ve been refusing to review Iizuka matches. However, this one contained a bit of teasing that got me all excited. Suzuki and Ishii were getting in each other’s faces. If New Japan is heading in that direction (could we see the RevPro title defended at an NJPW show again?) then you can count me in. Let the two hardasses murder each other.

Apart from that, there’s not much to say. Poor YOSHI-HASHI got beat up a lot before Yano won with a low blow and a roll-up on TAKA. It was all about the teasing.

They laid this out to set-up two matches from Dominion. Firstly, we had Taichi continuing to get into the head of Goto. He’s just a dick, to be honest. It’s classic Taichi. I have no interest in watching him (and the piece of shit) take on Goto. Maybe they’ll surprise us all, but I wouldn’t be betting on it.

Much more exciting was Roppongi 3K coming face to face with Despy and Kanemaru again. Those four have great chemistry which threaded its way seamlessly into the action. YOH would get the win with a Five Star Clutch on Kanemaru after slipping out of Deep Impact setting up another title shot for Roppongi 3K at Dominion. After Desperado, SHO and YOH smashed it out of the park at Super Juniors I can’t wait for that.

All that aside, it was okay. Roppongi 3K are always entertaining while Kanemaru’s use of Young Lions is good for a few laughs.

Continuing the theme of the show, this was more about the story than the action. We all know that Tanahashi doesn’t give his all in these encounters while Henare is at his best when facing off with people who hit him hard. Neither Scurll or Takahashi was going to provide that.

However, there was another stuff going on to keep it interesting. Marty kept poking at Jushin Thunder Liger who was on commentary at ringside. He was stealing poses and moves all while being a bit of a twat.

All of which led to the aftermath where Marty and Yujiro continued to beat down on Henare after getting the victory over him. Tanahashi tried to come to his rescue and was locked in the Chicken Wing for his troubles. That roused Liger from the bench as he charged the ring to make the save. Scurll then went on to challenge Liger, Tanahashi and Mysterio to a six-man tag at Dominion (although Kevin Kelly initially misunderstood and thought it was to be a four-way). I have no idea if that will be any good, but it’s certainly interesting.

These eight men went out and put on an all-action spectacle. It was one of those matches where there is so much talent involved that it didn’t really matter if they were only going at 70%. Their 70% is better than most people’s 100%.

They also managed to put together a decent story. It quickly became clear that this was the gang of LIJ against a series of singles wrestlers. Dragon Lee would come in and wrestle LIJ, then KUSHIDA would enter and wrestle LIJ and so on. They didn’t have the cohesion that the coolest team in wrestling did, and that would prove their downfall.

It was also notable for another Chris Jericho video, although sadly this one didn’t involve him swearing at a turtle. Instead, we got a more measured Jericho explaining why he was going after Naito. He did a masterful job of putting Naito over while also claiming that none of that would matter because he’s Chris Jericho. Of course, Tetsuya wasn’t that bothered by it all. He’s not bothered by much.

This match had a whole lot of things that I like. Firstly, we got The Greatest Undercard Wrestler On The Planet Chase Owens teaming with his best friend, Kota Ibushi. Throw in them wrestling an all-star team, and I’m having all sorts of fun. However, there’s not that much to say about it.

Not because it was terrible, in fact, it was far from it. It was a damn good bout with Chase Owens and Will Ospreay proving a surprisingly excellent pairing. We also got a taste of Ospreay vs Ibushi, and if Will ever makes his way to heavyweight, they better give us that feud. Perhaps more interestingly, it was notable how little we got from Okada and Ibushi. It makes you wonder whether they have that planned at some point in the future and don’t want to blow their load now.

The reason there’s not much to say is that when you get down to it, it was great wrestlers doing great wrestling. Sometimes you don’t need to overcomplicate that stuff. Just enjoy it.

After a long old tournament, it all comes to a head here. Taiji Ishimori vs Hiromu Takahashi. The focused aggression of Ishimori coming head to head with the impulsive chaos of Takahashi. Similar to KUSHIDA and Hiromu, it’s their differences that make them such intriguing opponents.

It was also those differences that dictated the story of their encounter. Right from the start, Takahashi was looking to use that wild offence to get an advantage. It was a tactic which would almost prove to be his downfall. He dragged Ishimori into the crowd, repeating his antics from the Desperado war by running the length of the stand to hit a John Woo. However, when he went to Powerbomb Ishimori down the stairs, Bone Soldier Reborn was able to flip him over with a hurricanrana and send Takahashi tumbling with an insane bump.

Suddenly the chaos was stifled, and Ishimori was in control. He’s a joy to watch in that situation as every move sets up the next one. It’s a seamless attack, and he was able to ground the Time Bomb. Grinding away at him.

The problem with a Time Bomb is that it always goes off. Finally, Hiromu was able to throw himself across the ring and connect with the Sunset Bomb to the outside. At this point, Kevin Kelly and Chris Sabin (who had joined him on commentary) were doing a fantastic job of breaking down Takahashi’s wrestling style. He doesn’t care about longevity, he cares about winning. Here, we began to see how far Hiromu would go to get the victory. Some of the bumps he took were insane, and they weren’t all from Ishimori’s offence.

Yet, despite all the insanity, they eventually came down to a battle of submissions. Ishimori’s Crossface vs Hiromu’s D. Ishimori won the initial battle, and it looked like it would prove decisive. Time after time he’d lock the Crossface on, twisting Takahashi’s arm back to put as much pressure on his shoulder as possible. Sadly for Ishimori, the same thing that allows Hiromu to near kill himself allowed him to survive the pain and fight back.

And, as has been established throughout the tournament, when Hiromu gets D locked in, he wins. Ishimori managed to escape once or twice but the damage was done, and when Takahashi dropped him on his head with that devastating Butterfly Piledriver it was over. While the Time Bomb would provide the finish, the D had done the damage.

This was outstanding wrestling and if you haven’t seen it, you should. If there is any justice in this world, we will see this match another thousand times because these two are special. God, I love wrestling.

If I’m honest, the undercard of this is pretty skippable. It was mainly used to set up Dominion, and while that was enjoyable, you won’t miss out if you don’t bother. However, you can not skip this main event. It is a genuine match of the year contender. Go out of your way to see it. Then, go out of your way to watch it again. It was wonderful.

If you enjoyed this review, please consider contributing to my Ko-Fi by clicking here. Even the smallest donation is appreciated.