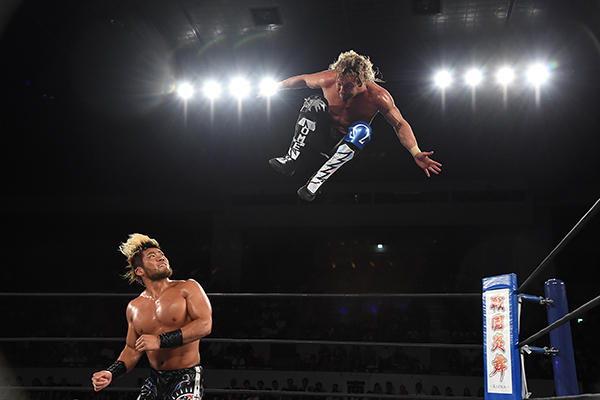 It’s Ishii vs Ibushi day! This is one of the matches that I circled with my sparkly gold pen when the blocks were announced. They are perhaps my two favourite wrestlers and are a perfect in-ring fit. You could take out the rest of the card, only give me that, and I’d still be heading home satisfied. The fact there are a few other tasty treats on offer is merely a bonus.

I was hopeful that we were going to get something different here. Early on, it essentially became a two on two. Loa was doing his usual and getting involved at every opportunity, so TAKA started doing the same. It led to a stalemate which seemed to resolve itself by Tama and Zack just going at it.

Unfortunately, it wasn’t to last. In what I thought was going to be a neat finish, Zack and TAKA got duel submissions on the Tongans. I was wrong. Marty Assami took his bump and away we went. Down goes TAKA and into the ring comes Loa. Zack would survive the assault, diving out-of-the-way of a Gun Stun and causing Tama to hit his brother instead. However, when he looked likely to tap Tama Tonga out Fale made an appearance for the DQ.

I’m still bored of this. There’s no denying it’s over in the building, but I honestly don’t give a flying fuck about that. I want to be entertained, and it doesn’t do that. The second Fale lumbered into the ring any enjoyment I got out of it evaporated. It’s the same thing that we’ve seen on every show.

Our boy Juice picked up a win!

After the disappointment of the DQ finish, Juice and Yano could be relied on to lift my mood. The Sublime Master Thief is continuing to present a mixture of proper wrestling and antics, which I am 100% on board with. He spent part of this brutally attacking Juice’s hand, even going all Suzuki and whacking it with a chair while it was duct taped to the barrier. Then, after Juice did an Airplane Spin, we got the two of them drunkenly stumbling around the ring, throwing wild fists at thin air. What a contrast.

The finish revolved around that injured hand, as Juice removed his cast to set up for the big left hook. Yano would duck the strike, but couldn’t slip out (despite trying very hard) of the Pulp Friction a second later.

If you can’t stand Yano, then you know the deal. Right now, I’m in a very pro-Yano mood, so it gets the thumbs up from me.

Do you want to know why I love wrestling? I love wrestling because of matches like this one. Tomohiro Ishii and Kota Ibushi went out there and murdered each other. Except they didn’t. Because it’s wrestling and the whole point of wrestling is that you don’t do that. However, it damn well looked like they were trying to because these are two of the best in-ring talents on the planet.

The bulk of the action was these two smacking the fuck out of each other, and there is no way that those strikes weren’t at least partly real. Their heads were flopping back as lighting fast slaps reigned down, and some of Ishii’s chops to the throat looked lethal. It was some of the most brutal hits that you’ll see outside of Don Frye vs Takayama as they seemed desperate to knock each other the fuck out.

And I am also delighted to inform you that Kota Ibushi is back to his shit. He dragged Ishii out to the crowd and Moonsaulted off the balcony, crashing down onto the Stone Pitbull. Then, back in the ring, the mental bastard no sold a Superplex, going all crazy-eyed as he came roaring back determined to boot Ishii in the head as hard as he could. Then, Ishii only went and one-upped him by no-selling a Brainbuster. If you’re someone who believes every move needs to be sold with five-minutes of writhing around I implore you to watch this. Watch how these two men popping up from huge blows only adds to the story. It’s not a lack of psychology. No, it’s showing how desperate they are to beat each other. The winner of this was going to have to murder his opponent.

Which is pretty much what happened. The final stretch was breathtaking. Ishii hit a Kamigoye, Ibushi came flying in with a Bomaye, and both men kept coming back. Mike Myers and Jason were locked in what seemed likely to be an eternal battle and sitting in my bedroom I was squealing like an over-excited puppy. Finally, Ibushi connected with the Kamigoye and Ishii just didn’t have anything left to kick out.

Everything that is great about the art of wrestling was encapsulated in this. They told a story that you can’t in other art forms. It was a war, and in the end, Ibushi just had a bit more ammunition. I didn’t even have to think about this rating.

I think it’s fair to say that Naito and Goto didn’t give everything they had. I don’t know whether they stood backstage watching Ibushi vs Ishii and realised they couldn’t beat that or if it was the plan from the start. It’s a long old tour, and most of these guys are beaten up before it starts. You can’t blame them for not always turning it up to eleven.

None of which is to say that this was awful. It wasn’t. Goto and Naito put on a solid performance. I’m pretty sure they couldn’t shit the bed if they tried to. It was a classic tale as Naito clearly didn’t respect the NEVER Champion, taking him easy right up until he wrestled his way into trouble. Goto reversed a Destino into a Reverse GTR, and suddenly he had an opening.

The problem was that the back and forth closing stretch following that spot wasn’t long enough for this to become a classic. Goto had a bit of a run, hitting a few big headbutts and getting close to putting Naito away with the GTR proper. However, it was pretty quickly cut off as Naito connected with a running Destino. While Goto kicked out of that, it was a short reprieve as Naito hit a second straight after for the win. Again, not awful, but not spectacular either.

I was worried this was going to be similar to Goto vs Naito for a long stretch of it. It felt like Kenny was giving Sanada nothing. Early on, Sanada was naive enough to hold the ropes open for Kenny and let him back into the ring without attacking. In response, Kenny dropkicked Sanada’s knee as he was entering the ring and set-up the story for the match.

From there on, it felt like every Sanada run of momentum was cut off by Kenny taking out that knee. He was dominating the action, and as he repeatedly drove his knee into Sanada’s chest, it looked like the end was nigh.

Thankfully, I was wrong. As Kenny hoisted Sanada up for the One-Winged Angel, the Cold Skull slipped out and locked in Skull End. Suddenly, I was into it as these two moved into an absolutely fantastic closing sequence. While I sometimes get frustrated at Sanada’s positioning of his arm on that Skull End, you can’t complain for a second about the many ways he has to get into it. It was suddenly Kenny who was struggling for momentum as it didn’t matter what he did, Sanada found a way to slip out and start choking him out.

Unfortunately, Sanda wouldn’t be able to continue his excellent form from the Ibushi victory. He managed to escape yet another One-Winged Angel with a Reverse Hurricanrana, but Kenny popped straight up and hoisted the LIJ man up only to send him crashing back down to the ground.

Sanada has had a sneakily fantastic G1. There hasn’t been much in the way of hype around him yet – minus the Tama Tonga shenanigans – he hasn’t had a dud performance. Unlike Tama, he is living up to the hype that has long surrounded him, and outings like this will do him no harm.

If you remove Kota vs Ishii from this show, it’s not a fantastic G1 night. Thankfully, we don’t have to remove that match because it happened which means it was a bloody brilliant couple of hours of wrestling. That has the potential to not only be my favourite showing of the G1 but perhaps the entire year. It’s going to take something special to beat it.

If you enjoyed this article, please consider contributing to my Ko-Fi by clicking here. Even the smallest donation is appreciated.