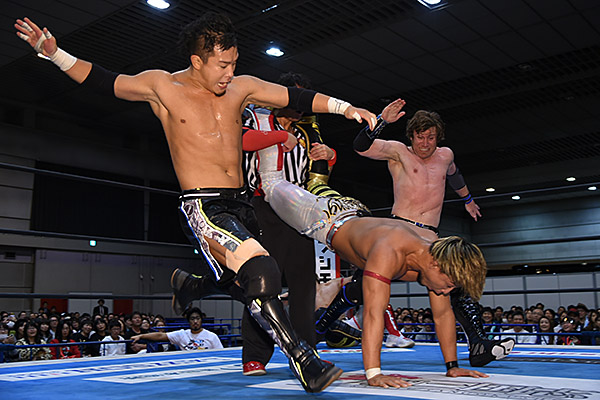 One of these matches is pivotal in deciding who goes to the final of this tournament and the other means fuck all. Considering the levels of effort put into this tournament when they were still supposedly wrestling for something, I’m a bit worried about what the match for pride will look like. We must treat every New Japan day like it’s Christmas, though. They might surprise me yet.

Look, I’m not going to go in-depth on this one because it means fuck all. While I’ve been kinder to Soberano Jr. and Volador Jr. than most, the CMLL lads have had a tournament to forget. The Firing Squad, meanwhile, have quietly impressed without ever blowing the roof of the place. It’s fitting that they finish things up in a meaningless bout.

And this kind of summed up both teams’ tournaments. Ishimori was great, Volador and Soberano had some moments, but were a bit sloppy, while Robbie is bursting with potential that is begging to be fine-tuned. It’s almost a shame that lad’s as well-travelled as he is because six months in the Dojo would perfect him.

Outside of all that, it was your standard NJPW tag match. I don’t think we saw anything from these four that we haven’t already seen from them. Unless you’re a huge fan of someone involved or a completionist like me, you can skip it, and you’ll never remember that you didn’t watch it.

KUSHIDA and Sabin have really grown as a team in the past few weeks. I know KUSHI’s the Junior Champion so he won’t be working many tags in the coming months, but when he loses that belt, I wouldn’t mind seeing them have a run together. They do an excellent job of working together to focus on the arm of their opponents, setting them up for the Hoverboard Lock. Both SHO and YOH got that treatment here.

We also saw Time Machine turning up the aggression as SHO slipped into the battling babyface role after they repeatedly slammed him on the floor, forcing him to drag himself back into the ring. It was an effective way to get a quiet crowd into the corner of Roppongi 3K, and while you wouldn’t call them hot for YOH’s hot tag, they were louder than they had been. A fact aided by YOH being fantastically entertaining.

What was nice about this was that the ending kind of came out of nowhere. Sabin came charging in only to be dropped by a 3K before YOH pinned him for the win. After a tournament where nearly every match has followed a formula having one end quickly and decisively was a bit of a relief, and it caught me off-guard. While this was far from a classic, it was a decent way to cap off the Super Junior Tag League.

A mediocre match followed by a good one. By the time you read this, Power Struggle will have happened, and you’ll know who came out victorious in the three-way final of this tournament. At the moment, it’s safe to say it’s an uninspiring way to finish this thing. Gedo just can’t stop himself from throwing all these teams together as this will be the third three-way they’ve had this year (with Shingo replacing Hiromu). However, I do have faith that they’ll deliver something decent, so I’m not going to do too much whining.