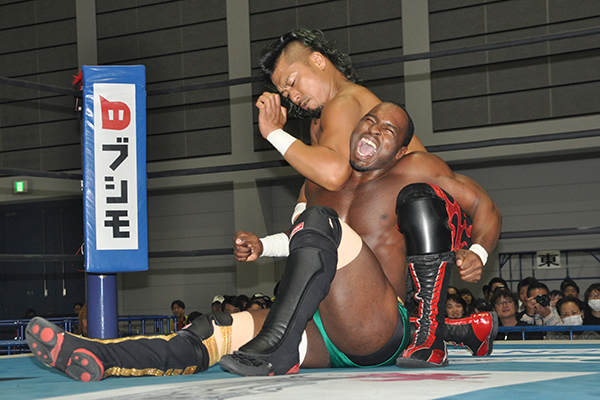 New Japan has split the final four group matches of the Super Junior Tag League onto separate shows, but I’m going to review them in groups of two rather than doing a piece for each one. Both of today’s bouts have potential final implications, so they at least hold some interest.

This makes it three times that Tiger and Liger have faced off against Suzuki-gun in the last month. It was also the third time that Despy and Kanemaru attacked them during their entrance. You’d think they’d use some of that experience to learn a lesson or two.

With those performances fresh in the mind, this followed the formula they’ve established. Tiger and Liger are the angry veterans, desperate to reclaim the honour of the Junior Tag Titles. Despy and Yoshinobu, meanwhile, play the pricks they always play. Ripping at masks and taking shortcuts. It’s an entertaining formula, but it’s a formula all the same.

There were a few added wrinkles towards the end. Liger hit a Brainbuster and seemed to have things wrapped up only for Kanemaru to yank the ref out of the ring. However, even that served merely as a set-up for the finish we’ve seen a million times as the whisky bottle came out. This wasn’t a bad match, it’s just hard to get over the feeling that we’ve seen it all before.

Naito is back in LIJ’s corner having taken some time off over the Korakuen shows.

Taguchi and ACH are great because they make me smile. However, they open every match exactly the same way and by the seventh time seeing it, I’m a bit bored. I know they’re in front of a different live audience each night, so can get away with it, but it’s stopped working for me. You can basically skip the first five minutes because you know it’s not going to be taken seriously.

Thankfully, my boy Shingo is in town, and I’m still getting a kick out of watching him wrestle in a New Japan ring. He screams star. It’s the way he saunters into the ring as if daring anyone to stand-up to him before taking off a sprint to decapitate his foes with a Pumping Bomber. Or the casual way that he plucks his fellow Juniors out of the air, hoisting them onto his shoulders before bringing them crashing down. This tournament might not have seen him produce countless four-star classics, but it’s given him a chance to settle into New Japan which might prove to be its legacy.

He was involved in the best of this match, particularly during his interactions with ACH. The gaijin star is one of the few Juniors in New Japan who might be able to match Shingo for strength, plus he’s more athletic. That led to them playing off each other nicely, right up until the moment Takagi and BUSHI put him away with the assisted MX.

That wasn’t even the end of the fun as Taguchi dared to go for a fist bump with Naito during the celebrations. Tetsuya wasn’t too Tranquilo about that as he threw him into the barricade before dealing some damage to the Funky Weapon, much to the delight of the crowd. Anyway, this was another decent match that didn’t do anything special even as Shingo continued to prove to me that’s precisely what he is.

If my maths is correct, we now have the possibility of a three-way tie at the top of the table. If Roppongi 3K win their match, they’ll be level on 5-2 with LIJ and Suzuki-gun with each team holding a tiebreaker over one of the others. I suspect we’re heading to a three-way-dance.

League tables aside, these matches were easy to watch. Nothing about them particularly stands out, and I won’t remember them in a week, but I don’t regret the time I spent with them either.