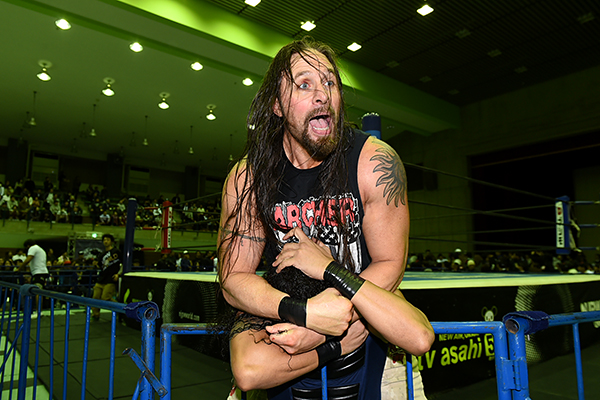 We’re somehow onto night nine of World Tag League which is even more mental when you consider the rest of the world is at fifteen or something daft like that. That’s a lot of shows full of wrestling that most people are never going to think about again. I guess it’s different if you see it live. Or if you decide to write reviews about it all… on with the show!

It’s LIJ’s turn to rumble with the rookies as they gave the impression they weren’t taking the Young Lion’s threat entirely seriously. EVIL and Sanada seemed to be mucking around as they’d tag in, hit a slam and then tag straight back out again. Something tells me Yoshida won’t have appreciated that treatment.

Although he got his revenge in the best possible way, escaping from their beatings with a slam of their own before unleashing Umino’s fury. That led to the usual flurry of offence before the pups managed to lock on duel Crabs in an attempt to get the win.

Unsurprisingly, it was a flawed plan, as Sanada punished Umino for his presumption by spinning him around in the Skull End and forcing him to tap. Still, this was fun. All four of these men are having strong tournaments at different ends of the table.

This had a pretty simple flaw. I wanted Nagata vs Sabre, and it failed to provide that, at least for any significant amount of time. They had a quick strike off, but it was over before it began as Nakanishi continues to be the focus of this team. Why? I understand New Japan likes to protect potential match-ups, but when are Sabre and Nagata going to feud? It’s more likely to happen in RevPro than Japan.

You shouldn’t review the match you want, but the one you get. However, it’s hard not to feel frustrated as Nakanishi lumbers around the ring and Nagata stands on the outside. It’s making their tournament run hard to love.

Chuck has developed a habit of providing commentary from the ring apron while Beretta gets worked over. With the way these shows are taped, it’s only possible to hear smidgens of what he’s saying, but I found it more entertaining than the match itself. Not that what was happening was awful, Chuckie’s just a funny dude.

The match itself was another solid Tag League outing. Sadly, because of that, there’s not much to say. No-one fucked up, and no-one excelled. Everyone went out and did their job right up until the moment Kojima was pinned via Strong Zero.

I wonder if New Japan wrestlers dread working with Suzuki and Iizuka. Being thrown through barricades, choked with chairs and generally treated like trash can’t be fun. It must be a relief when they get to the part where all Iizuka is doing is biting them.

There was some comedy mixed into this as Juice’s desperate attempts to make Marty Asami aware of the skullduggery kept backfiring on him. I imagine Dave was jealous of that role as he got the joy of having the elbows he threw at Suzuki being what backfired on him.

Sadly, you knew where this was going the second Delightful Dave was left around in the ring with Murderous Minoru. Finlay does not have the edge to deal with that man, so he ended up being spiked on his head. It was a rough afternoon for the lad in a match that resembled all the other ones Suzuki and Iizaka have had.

I don’t review Michael Elgin’s matches and if you want to understand why give this a read. 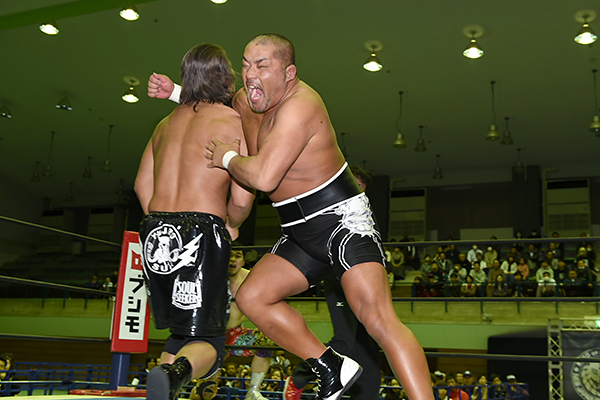 His balls definitely won’t protect him from that. Credit: NJPW

Do the apparent massive testicles of Yujiro and giant schlong of Hangman make Yano’s low blows more or less effective? On the one hand, there’s presumably a bigger target for him to aim at while on the other, perhaps these enlarged genitals have gained power thanks to their size. Christ, what have I become? I have a Master’s in Journalism.

Any match that features Hangman and Ishii teeing off on each other is going to go down as praiseworthy in my book. I love the contrast between the two men. Hangman is the natural athlete, tall and good looking. Ishii, meanwhile, is built like a bowling ball, squat and barrel-chested. Yet, they’re both hard as nails. Even a minute of them wrestling elevates what’s around them.

Whether Yujiro was more resistant to a nut shot or not, it proved to be enough for Yano to roll him up and continue the CHAOS team’s hot run.

I’ve made it pretty clear in my reviews of this Tag League that I have little time for GOD and KES. In a company packed with fantastic wrestlers, it baffles me that New Japan chooses these four to be the focus of their tag division.

It’s a viewpoint that made me very tempted to sack this match off, especially when they started by brawling into the crowd. However, I’m nothing if not a martyr, so I decided to grit my teeth and see it out. Although if that VOD had been running to over twenty minutes, you better believe you wouldn’t be reading this right now.

So what happened? Why they had a GOD vs KES match. One packed full of shortcuts and skullduggery. They tried to sell us on the idea that they hate each other, meeting on the ramp and fighting into the stands. However, Archer was more interested in slapping Young Lions and mouthing off at fans than he was at beating on Tama and Tonga. It’s hard to believe someone is fuelled by rage when they keep stopping to do something else. It’s nice that he’s got over with a few laughs, but it didn’t help the match.

GOD got the win in the end, and I still didn’t care. I suspect one – if not both – of these teams are off to Wrestle Kingdom, and that bums me out. You can do better Gedo! Now stop reading this and go sort it out.

This was my least favourite of the seven-match shows as it was the first to drag. There were a lot of unoffensive matches which, to be honest, are worse than the offensive ones. At least then I have something to say! For these, I have to start talking about Yujiro’s balls. You can happily skip all of it although I acknowledge that most people will probably enjoy the main event more than I did.