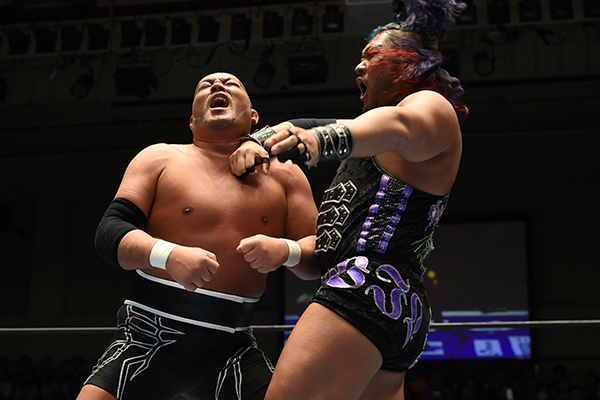 We’re into double figures as night ten of World Tag League rolls into town. Well, it actually hit ten around a week ago, but it’s only just got to my flat. I’m going to stop blabbering and start reviewing.

I don’t review Michael Elgin’s matches and if you want to understand why give this a read.

Nagata and Nakanishi haven’t won since the first night. The legends are in this tournament to put people over, but they’re taking that idea to extremes. They must be excited for the Young Lion face-off as they’re at least guaranteed a victory in that one.

Juice and Finlay worked hard as they attempted to hide the deficiencies of Nakanishi. Robinson, in particular, was at his flamboyant best, a multi-coloured explosion of personality. It was quite a contrast with the serious conservatism of Nakanishi and Nagata.

It’s an attitude that the Gaijin team deserve credit for. They managed to take the immobility of Nakanishi and work around it, making him look good. By doing so, they shone too and produced a decent match.

I love the heat that Archer was able to get from using the Mongolian Chops and Kojima’s rapid corner chops. It’s touches like that which make the Japanese fans the best as they prove willing to go along with the story the wrestlers wish to tell.

But that’s not what we want to talk about. No, we want to talk about the fact Tenzan only went and hit his damn Moonsault! With his aching ankles creaking he took to the top rope and crashed down with all the elegance of a fridge being thrown from a second storey window. It was beautiful. Made all the better by how delighted Kojima seemed to be with the situation.

Unlike their dad buddies, Kojima and Tenzan have had one hell of a Tag League. This means they’ve picked up wins over GOD and KES, two of the favourites to win the damn thing. Is there a chance they’ll play a part in proceedings come the final whistle?

I am here to inform you that Togi Makabe started this match. He may have only spent twenty seconds in the ring, but he did something different which is worthy of celebration.

For the second review in a row, I’ve started by talking about something I don’t want to talk about. CHUCK! WHAT ARE YOU DOING? With the action finely poised Dustin only went and snapped, dragging Henare into the crowd and launching multiple chairs at him. He then decided those chairs needed to be in the ring and that maybe he’d like a table too, a move which unsurprisingly led to a DQ. That wasn’t the worst bit, though. Because when Greg tried to stop him, Dustin only went and punched his best friend! What is happening?

I don’t think I can deal with this level of turmoil. How am I supposed to feel? It’s like watching one of your parents beat a young man with a chair. That kind of thing scars a boy.

This didn’t feel like a break-up angle, more a Chuckie T has issues angle, so you can put me down as intrigued. Chuck is famous for his goofing around, but he’s a hell of a wrestler when he wants to be, and this could go somewhere great.

That aside, Beretta and Henare had a fun sequence in the middle of this which is worth a watch even as it’s overshadowed by what came next.

After a load of matches that don’t feel like they mean much, it’s nice to have one that plays into an ongoing feud. The Bullet Club and The Elite’s beef may have been put on hold, but matches like this show that there is a lot of unresolved tension there which New Japan can tap into whenever they want.

I’ve probably mentioned this in previous reviews, but Hangman Page has put together one hell of a hot tag. The crowd explodes when he starts running through it and by the end of this match they were chanting his name. Throw in his willingness for insane bumps (he got slammed by Loa onto the apron before bouncing down to the floor), and he’s become a spectacular wrestler.

Page’s ability to connect with the crowd elevated this. If they’d had this exact same match in front of a silent audience, it would have been merely alright. With the fans hanging off every move it became great. They were desperate for The Elite to get the win and booed heartily when Jado’s kendo stick took Yujiro out of the action.

That would be the decisive moment as it left Hangman along with GOD. A Magic Killer later and The Elite suffered yet another defeat at their hands. Although getting a match that I enjoy out of Tama and Tonga should make you the winners.

Since the moment Zack Sabre Jr stepped in an NJPW ring people have been craving him vs Suzuki. Who doesn’t want to see two sadistic bastards try and tie each other up? With that in mind, I was a bit worried New Japan would avoid it here, but my anxiety was in vain as Taichi and Iizuka headed to the apron and we got straight to it.

And what a wonderful advertisement for that match this was. Suzuki and Zack spent the first part of this grappling, battling for control on the mat as Suzuki got to teach his young protege a thing or two about wrestling. Not that ZSJ was rendered irrelevant, the young pup had a few tricks up his sleeve too. The only issue problem with it was that it eventually came to an end.

When it did end, Suzuki decided to teach Zack a few more lessons, dragging him into the crowd and attempting to Gotch him through a couple of chairs. If anyone thought the Suzuki-gun men were going to go easy on each other, they were being proven wrong. Meanwhile, Iizuka was biting folk and smashing chairs over Taichi. Who need enemies, eh?

This was great. The Suzuki-gun vs Suzuki-gun element of it seemed to bring the best out of all involved. If anything, they upped the viciousness, looking to rip each other apart in an attempt to assert dominance over the faction. At one point, Iizuka started trying to choke out ZSJ which I never thought I’d see.

This one ended in the boss extending a fist bump to his minions. However, you now have to wonder whether Zack picking up the win might be the seed that starts the build to him challenging Suzuki once again. That’s what I’m hoping for anyway.

You’ve got to love the duel image of EVIL tossing Ishii into a wall while Sanada chills out because he’s got Yano locked up in the Paradise Lock. Sometimes it’s the contrasting styles that work the best together.

Talking of contrasts, I always get a thrill out of Yano vs Sanada. They’re one of these pairings that has surprisingly brilliant chemistry as Sanada clearly enjoys pissing about. For a guy that has been accused of not having much personality, he shows a lot of it in these face-offs.

Then there’s Ishii who has terrific chemistry with everyone. I can’t think of any previous beef between EVIL and him, but they certainly made you believe they hated each other. It became a battle to prove who was the toughest, a fight that saw the fans come out on top.

In the end, it would come down to brains, not brawn. After numerous finisher attempts EVIL and Ishii were taking out of the equation. That left Yano free to go for the low blow only for Sanada to deftly step aside. He then bundled the Master Thief into the ropes and rolled him up O’Conner style for the win. This was a whole load of fun.

This was probably the most eventful Tag League show so far. You had Chuckie T losing his shit, Suzuki-gun facing off, The Bullet Club vs The Elite and Tencozy beating KES. That’s not bad for a day’s work. It’s also the most three star and above reviews I’ve thrown out so I think we can officially slide it into the position of the best show of the tour. Well done night ten.