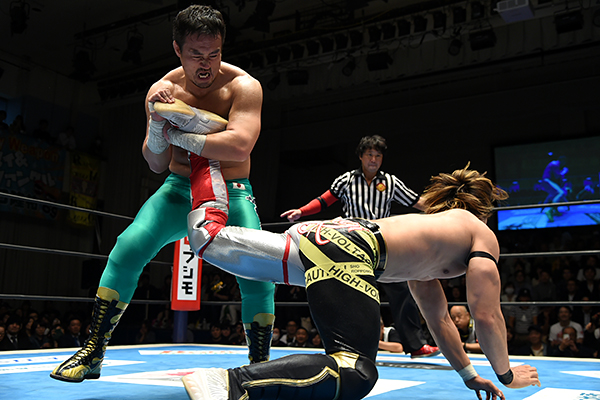 Taguchi has his fighting face on. Credit: NJPW

We now live in a world where Lanny Poffo is commentating on New Japan shows. That’s a world I distrust. I’ve got nothing against Lanny Poffo, it’s just fucking weird. Anyway, we’re back in Korakuen which means we’re getting four tournament matches and hopefully a smidge more effort.

Jushin Thunder Liger is going out and hitting that Somersault Senton off the apron at the age of 53. I know pointing out that he is failing to age is almost a cliche at this point, and I’ve probably done it before, but fucking hell. Judging purely on his current level of in-ring work would you be that surprised if he went for another ten years? I’d be disappointed if he didn’t.

Outside of Liger, this was what you’d expect it to be. The Junior legends worked through their spots while KUSHIDA and Sabin did everything in their power to make them look good. I was amazed at home much effort KUSHI put into getting them over. He ate a Super ‘Rana from Liger, followed by a Tiger Driver and a Tombstone. He’s the Junior Heavyweight Champion, yet he’s relying on his partner to save him from getting pinned by two of the dads.

The Lucha boys haven’t had the best tournament. They’ve done some cool flips, but considering the high benchmark that Volador Jr. has set in the past, it’s all been a bit disappointing.

With that being said, this was a lot closer to what I wanted from those two. Early doors, Suzuki-gun leaned into their gimmick (when do they not?) and dragged Volador and Soberano into the crowd. They responded with a pair of dives off two of the entranceways as Korakuen roared.

When they got back to the ring, Volador seemed to find his groove against Desperado. The speed he bounces around the ring at is extraordinary while he even got down and dirty with Despy in a chop war.

By the final stretch, the fans were firmly behind the two imports. Sadly, cheers can’t combat a Santori Surprise as once again Suzuki-gun snuck out with a win.  Still, it was nice to have proof that Volador and Soberano can go.

Shingo is all set to be a star in New Japan. This is his settling in period, yet he already looks like a boss. I know everyone is expecting a quick move to heavyweight, but judging by this, he should mix it up with Ishimori before he goes.

While Robbie Eagles is a bit off Shingo’s level, the guy has a shitload of potential. His only issue is a tendency to overact. There’s a lot of yelping combined with over the top facial expressions. It’s like an extreme version of Will Ospreay. If he can learn to dial back on those and be a little more subtle, then his in-ring work is already at a high enough level for him to go far.

As for the match, it was good right until the final few moments when it rose to greatness. First, Eagles looked to have the victory, connecting with a 450 to the leg of Bushi before locking in his Ron Miller Special. Shingo wasn’t having that and made the save. Then BUSHI seemed to have it all sewn up, hitting an MX. This time it was Ishimori who made the save. Thankfully for LIJ, Takagi was ready and attempted to decapitate the Bone Soldier with a Pumping Bomber. An assisted MX later saw our Ingobernables march on. Now, let’s book that Shingo vs Ishimori feud sooner rather than later.

Talking of feuds I’d like to see, let’s have SHO vs ACH a few more times. Actually, this was a match made up of natural pairings. SHO and ACH worked stiff, YOH and Taguchi worked silly. It just worked.

Of course, that means if you’re one of those people who can’t be bothered with Taguchi anymore, there is going to be a portion of this that you don’t enjoy. There were fingers going up arses and all the usual ridiculousness. I’m not going to play serious wrestling fan, it makes me laugh. However, I understand that it’s not for everyone.

Those fans can skip ahead to SHO’s return to the ring, as Roppongi’s other man got things back on track. SHO and YOH wiped the smiles off people’s face by locking Taguchi down in their corner. Then, we got a spectacular ACH hot tag to brighten us all up again. That guy is great, and if New Japan has any sense, they’ll be offering him a contract.

The closing stretch saw Taguchi put the silliness away and get down to business. He and YOH battled back and forth in the ring with ACH and SHO slipping in and out to provide assists throughout. There was an exchange of flash pins that could have gone either way while YOH survived the ankle lock. What he couldn’t survive was a Half and Half Suplex from Taguchi (something I can’t remember seeing from him before) as Super 69 pulled off the biggest upset of the tournament so far. Once again, a hot final few minutes saw this rise up the star ratings.

You know when I questioned the decision to have Lanny Poffo commentate on this show? Yea, I spoke too soon. You see, Lanny Poffo didn’t comment on this show. They just had him record a collection of wrestling cliches and played them every now and then so that poor Mavs Gillis could pretend he had a friend.

Commentary aside, this was the best four matches the tournament has had since they were first in Korakuen. It’s still not hitting New Japan’s usually lofty heights, but it’s easy to watch, and it is good fun. I’m not going to complain about that.