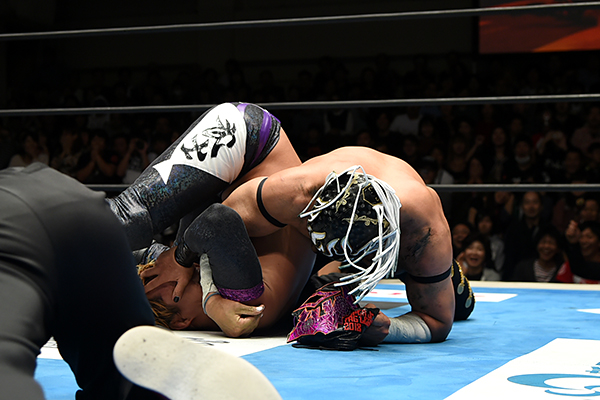 It was nice of Despy to cover BUSHI’s face for him. Credit: NJPW

I’m not going to change my tournament long policy of ignoring the undercard, but it would be remiss to not mention what happened in the final multi-man match of this show. In what has become a common theme, The Firing Squad went after Okada post-match and Tanahashi made the save. This time, rather than rejecting the Ace’s help, Okada embraced in. In fact, Okada and Tanahashi shook hands while Korakuen Hall exploded. I watched that moment spoilt, yet it still gave me goosebumps. It’s so much more than a handshake, it’s the greatest feud in pro-wrestling coming full circle. Okada and Tanahashi gave the Juniors an impossible moment to follow just by clasping hands.

Taguchi and ACH wore their Tiger and Liger masks to the ring. The legends looked a bit taken back by that, but they seemed to take it as a compliment. Although they are both masked men, so who knows what they were thinking.

Taguchi kicked us off with some silliness before ACH came in all fiery. Outside of perhaps Shingo, ACH is the MVP of the Junior Tag League so far. You can tell he adores wrestling in Japan as he always brings it. He sold a Shotei from Liger on the outside like he’d been shot at one point as you can bet wrestling these two is a dream come true for him.

The bulk of the action was built around Taguchi selling his abdomen. It’s not a body part you see people working over often, and Taguchi did it by acting like he had horrendous gas. An act that came to its natural conclusion with the suggestion that he’d shit himself.

Despite that problem, Taguchi went through a flash pin sequence with Tiger before eventually managing to pin the grumpy kitty’s shoulders to the ground. This had its moments, but if you skip it, you won’t miss much.

A quick note to say Lanny Poffo is back on commentary tonight and has found his voice. That’s not a good thing. If you’re susceptible to cringing, you might want to go with the Japanese team. He counted to ten in Vietnamese at one point and I’m still not sure why.

SHO and YOH spent part of their excursion in Mexico, so I had some expectations for this match. They slipped into the ‘heel’ role for lack of a better word, grounding Soberano Jr. and working him over. That allowed for a Volador hot tag which is something he excels at. Well, he did right up until SHO drove him onto the back of his head with a Deadlift German Suplex.

I feel a bit sorry for the CMLL guys. This show and the previous one at Korakuen seemed to be the moment where they found their feet on this tour. Unfortunately, it’s nearly over, so they’ll have spent the bulk of their matches disappointing people. Volador, at least, is better than what we’ve seen of him (while Soberano has potential, he is sloppy), and I’m sure he’ll prove that again in the future.

In the here and now, this was a decent taste of what they can do. SHO and YOH are great opponents for them as SHO throws them around and YOH bounces with them. In the end, they would take Soberano down with a 3K and march onto their potential final.

I was praising Ishimori’s work with Shingo in my last review, but the truth is that he’s great with everyone. His opening sequence with Sabin and KUSHIDA was fantastic. It’s easy to forget that he’s still relatively new to NJPW.

He and Eagles continued their tournament wrong strategy of going after an opponent’s leg as they zeroed in on KUSHIDA. That leg would prove pivotal to the flow of the action as it cut off Time Machine’s offence at every corner.

That was until Eagles climbed up top to go for his 450. As he came plummeting down to Earth, KUSHIDA had one last throw of the dice, Spinning around, he reached out and grabbed an arm. Suddenly, the Sniper of the Skies was the one with a dud limb.

In that battle of the limbs, the leg would end up trumping the arm, though. KUSHIDA was thwarted by it during a Back To The Future attempt and Taiji Ishimori was able to respond with Bloody Crosses for the win. In a tournament where KUSHIDA hasn’t dropped a single fall, you better believe Ishimori pinning the Junior champion means something. Good match.

Take a guess at what Suzuki-gun did at the start of this one? What? Why would they do that? You’re disgusting. (Heh, I made a goof).

All four men quickly vanished into the crowd to brawl in among the fans. Unlike the previous night, we didn’t get the double leap off the entranceways, but we did get a BUSHI leap, so that’s something. It was an act he might have regretted because Suzuki-gun got revenge in a fashion their boss would be proud of. In other words, they beat LIJ around the head with some chairs. While it’s not the prettiest tactic, you can’t doubt its effectiveness.

Those Suzuki tactics seemed to be giving them the edge. They were able to continually take the momentum away from LIJ, be that with a steel chair or a carefully aimed boot from the outside. By the time Takagi was able to get some space to try and steamroll through them, his neck was bothering him, and after taking out Despy, he was forced to tag out.

It’s a common theme in New Japan tags that the final few minutes of chaos are the best part and it was no different here. We got a vicious Pumping Bomber, poor Tsuji being pulled in front of a BUSHI Tope Suicida and multiple brilliant near falls. Despy’s tactics would ultimately pay off, as he low-blowed BUSHI, pulled his mask off and pinned him for the three.

To be honest, this result was never in doubt. LIJ winning would have given them an unassailable lead which is no fun. However, those final few minutes tricked a few people into believing they might just sneak out with it and made up for the shenanigan heavy start. Once again, Korakuen Hall is proving to be what this tournament needs to deliver.

Another fun show with the added benefit of a huge moment taking place on the undercard. As things stand, I believe Suzuki-gun, LIJ and Roppongi are your potential finalists, with all three being viable contenders for that spot. Pre-tournament I predicted it would be the latter two and I’m going to stick by that. I guess we’ll find out whether I’m right.