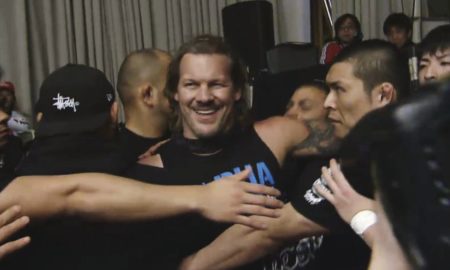 He looks quite pleased with himself. Credit: NJPW

It’s the night after Wrestle Kingdom and all through Korakeun Hall, new stories are stirring and I’ve got nothing more.

That will be my last Christmas themed intro I promise.

If you’re getting into New Japan for the first time, look at New Year Dash as being their Raw after WrestleMania. It’s when NJPW hit the reset button and set up the storylines that are going to take them into the New Year. Which makes it pretty damn exciting. Let’s dish out some stars.

School is in session.

We see a lot of variations of this match in New Japan. The Young Lions vs the New Japan Dads. However, it never fails to be interesting. No-one gives the cubs a better workout than their Dads. Whether it’s Nagata chopping a lesson into Yagi or Oka getting to fire-up on Kojima, it’s all experience that will aid them in the long-run.

Of course, they were never going to win, but we are getting ever closer to the day when they rise up and become leaders of their own pack.

Talking about rising up, Henare appears to have graduated. Let’s hope he got a cake. It’s well deserved, as he has come on leaps and bounds as a character in the last few weeks. The embracing of his heritage and his willingness to go toe to toe with the likes of Ishii leaves me excited about his future.

Unfortunately, that wasn’t enough to save a Suzuki-gun shitfest. You can’t have a good match with that much Iizuka and that much brawling on the outside. I will, however, say that I enjoyed Kawato and El Desperado’s sequence. It just wasn’t enough.

I’m assuming this Seven Match Trial is going to be Young Kit’s last act before he heads out on his excursion. I’m glad New Japan are speeding through his development. He’s not actually that young and – as he proved here – he’s ready. With his build and charisma, he doesn’t need to be an elite worker to get over.

As for Jay White, I think I was a bit hard on him in my Wrestle Kingdom review. I still think he should have won, but the match was probably better than I said it was. White is growing into his new character, and it will take time. The important thing is that he is improving and as this show (and the subsequent press conference) have proven, New Japan has a plan.

Those feelings were aided by the fact that he looked better here. He played a mixture of cockiness and malevolence as he toyed with Kitamura before getting the win. He appears to be a dead-eyed psychopath, and that has potential.

Have I mentioned how much I love Cheeseburger in New Japan? It’s this lovely thing where the Japanese fans adore him and he has the time of his life. He and Omega tagged in at the same time and it was Cheeseburger who got the reaction.

This was the perfect time to pull out some Elite silliness. Five of these guys were beaten up from the night before and no-one can blame them for taking it easy. Matt and YOH’s feeble attempts to wrestle with their injured backs were actually pretty funny. Sometimes fun is alright.

If Taguchi got serious and had Taguchi Japan start signing contracts they could dominate New Japan. Between his regulars and the friends they draft in, he has one hell of a team. The beauty of it is that Taguchi is precisely the kind of guy who wouldn’t get around to that. He’s too busy talking about asses.

That nonsense aside this match was, well, mainly nonsense. This was all about having fun and while we got a couple of cool sequences, there wasn’t much to it. I will take a second to praise KUSHIDA. He does more than he has to in these spots. The guy doesn’t seem capable of taking it easy, and that’s to his credit.

We also got another stand-out sequence between Cody and Kota. Kota is definitely on my list of people I’ve seen who are capable of getting the best out of Mr Rhodes. It’s a strange list that includes him, Okada and BT Gunn. However, that wasn’t the real Kota and Cody story in this match. Let’s get on to the main event.

Kenny saved Kota. It was only January 5th, and 2018 hit its romantic peak. All the tension, all the hints that they’d gone their separate ways but when push came to shove Kenny placed Kota ahead of Bullet Club. It was beautiful, and it was fantastic storytelling. They’ve been slowly building this Bullet Club rift for months and it feels like it is coming to a head. Subtle touches like The Elite’s gear being a different colour to the rest of The Bullet Club is the perfect foreshadowing of what is to come.

Verdict: Two And A Half Stars, Five Star angle

I’m putting my analysis of Jay White rejecting Kenny’s offer to join the Bullet Club here because it is separate to the above. I also would have had a very different opinion on January 5th to what I do today.

Because, since this angle, Switchblade has joined CHAOS, with the caveat that he basically told Okada that one day he will stab him in the back. I liked the idea of White as a lone-wolf, but it seems he’s playing the game and is willing to team up with CHAOS to take down The Bullet Club.

Are they taking the piss with these belts? Trent didn’t even get to show them to Bo you monsters!

In all seriousness, who cares whether these belts change hands? They mean nothing. I am however confused as to why they chose to have Beretta take the fall? He got the shine in the match at the Dome so why take that away here? What is their strange obsession with protecting Yano?

Since I’ve probably just put more thought into this division than Gedo, let’s talk about the action. It was alright. That enough? No? Fine. Beretta and Ishii were in it, so it was never going to be awful. Ishii’s relentless offence and Trent’s selling elevate everyone around them, and that made this watchable.

However, it didn’t hide the fact that The Bullet Club’s heat section was a bit dull. Tama, Loa and Fale all have upsides, but they aren’t guys you want to see work someone over for too long. It was slow and uninventive. Still, we got to see an Ishii hot tag which literally saw him run at people until they fell over, so that was good.

What joker keeps putting the piece of shit with War Machine? In fact, why are we still booking him full stop?

I enjoy Suzuki’s when he’s got someone in his crosshairs. He ignored everyone because he had a mission. He was going to attack Tanahashi. He didn’t care if he got disqualified. This was his shot, and he was taking it. As for what I think of the feud? It’s got the usual Suzuki problem. If we get the Suzuki that turned up at Wrestle Kingdom, we will have a lovely time. If we get the one who brings all his minions with him, then we can probably give it a miss.

The rest of the match was alright. Dash isn’t really about the wrestling, it’s about setting up new storylines. War Machine put someone over on what is expected to be their way out, Lance Archer got a bunch of people wet and we got a little more Sabre vs Rowe. Can’t complain too much.

Well, Naito is still over in Korakuen at least.

There is a lot to break apart in this as it set up about twenty different feuds. Let’s try and get through all of it.

Firstly, it very much appears that Hiromu and Ospreay aren’t done. They are still going after each other and Hiromu focused on Will in the post-match attack. We also saw Goto being attacked by Evil which would be the kind of hard-hitting feud that Goto promised us with his NEVER Title run.

The one we can absolutely confirm is that Jericho and Naito’s beef just got serious as Jericho appeared from the crowd to attack Naito from behind. This isn’t a surprise after the barbs they threw at each other in the build-up to the Dome. I expected it to be Naito’s first defence rather than him bouncing back, but it can still be an important program for him.

The other exciting touch was Naito handing Okada over to Sanada. In the press conferences that followed Okada said he is up for the challenge, with the caveat that Sanada has to put his title on the line first. So, it looks like we might get Okada and Goto vs Evil and Sanada before any title shots are guaranteed. That’s an intelligent piece of booking, particularly with some smaller shows coming up. It keeps Okada in a big spot without having to burn a title match.

All that and we haven’t even mentioned the action! It was good. CHAOS vs LIJ is always good. It wasn’t anywhere close to amazing and you’d have been silly to expect that. It did exactly what it needed to do by giving Naito a win and pushing all these guys into new programs.

This wasn’t a great wrestling show. However, it was a great storyline show. From Naito vs Jericho to Kenny vs Koto. If you’re a new fan, this isn’t essential viewing, but it does shape the future. If you’re an old fan, well, you know the deal.